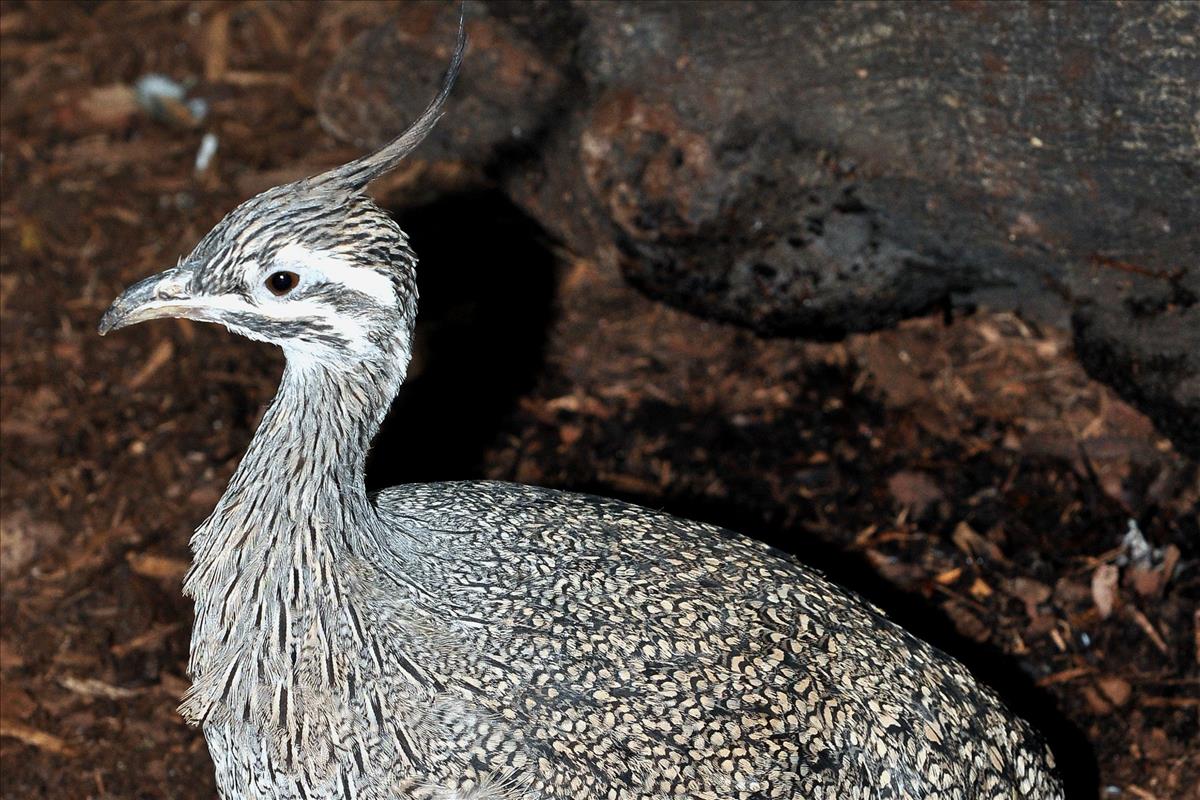 The elegant crested tinamou, as with all tinamous, is basically a ground bird with a compact form, slender neck, small head, short wings, and a short, slender bill that curves slightly downward. Their plumage is a dull grey with dark streaking. Males and females have similar plumage although females can be somewhat brighter in colour. They have a long crest, normally carried backwards with feathers twisted upwards. The leg colour varies from pale blue to grayish brown. The feet are strong with three well-developed forward toes but lacking a hind toe. Females tend to be larger than males. Length is 37.5 to 41 cm with a weight of 402 to 512 g.

Throughout Argentina and Chile.

Arid and semi-arid grassland, dry savanna, open woodland, dry Andean steppes, bare hills with isolated patches of bushes (e.g. Larrea), and cultivated areas. They are found at 2500 m altitude down to sea level. In Patagonia they prefer sheltered valleys whereas in other temperate zones, they seek out sandy areas with thorn scrub and low evergreen bushes (e.g.Verbena tridentata).

They are omnivorous. Plant matter includes small fruits and seeds from the ground or from plants they can reach from the ground. They also eat opening buds, tender leaves, blossoms, or even roots. For variety, they catch insects, larvae, worms, and mollusks. They tend to be more insectivorous in summertime when that type of food is in abundance and become herbivorous during the winter. They swallow pebbles to help aid in breaking down food.

The males live in polygamy and the females in polyandry (multiple mates). Breeding occurs from June/August to November; but most eggs are laid during October in nests on the ground, made of plant matter. The females mate with a number of males and lay their eggs in various nests. Eggs number between five and nine, shining like porcelain. This species lays green eggs; other species of tinamou have turquoise blue, purple, chocolate, or wine red eggs. They are always uniformly coloured, without blotches. They are oval or elliptical in shape. The male incubates the eggs by sitting on them for many hours leaving the clutch only in the morning to look for food. Incubation time is 20 or 21 days. The chicks are densely covered in soft down in similar dull colours. The male does the parenting as well as the female.

Tinamous (tinamidae) are a primitive bird family that are considered closely related to the ancestral group of ratites (flightless birds). Modern birds have a ridge down the center of the sternum (breastbone) where the flight muscles are anchored. Tinamous do not have a ridge on the sternum. Since the tinamous have short wings and a flat sternum with less strong or efficient muscles, their capacity for flight is limited. They are capable of taking off fast when approached by predators but cannot fly far. Therefore, they spend most of their time on the ground, particularly when roosting. During winter, they move in small groups of 6 to 30 birds over a fairly large area when food is scarce, whereas in summer time, they tend to stay in a much smaller area when food is plentiful. In Patagonia they may invade irrigated plantations such as alfalfa.

Globally, they are not threatened but populations have declined appreciably due to hunting and habitat destruction. They are still abundant in remote areas. Their principal predators, other than man, are skunks, foxes, wild cats and raptors, such as the red-backed hawk.