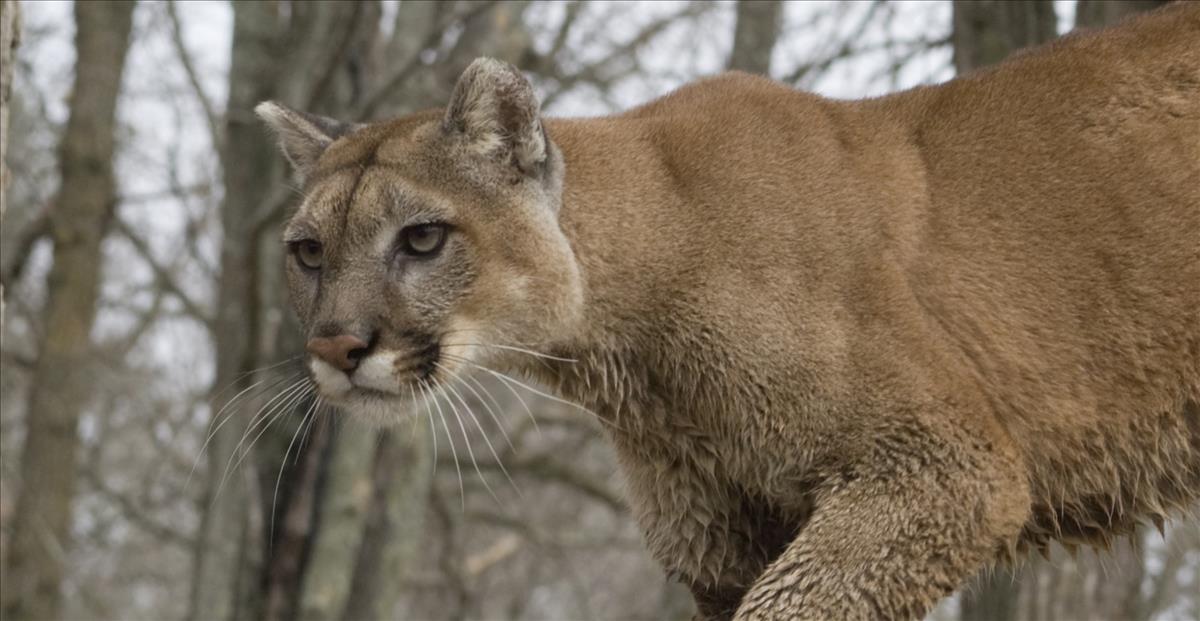 The cougar is a powerfully built cat with a long, narrow body and exceptionally strong legs, with the hind legs being larger and longer than the forelegs. These hind legs are proportionally the longest of the cat family. The cougar has a very long tail, reaching one third of the cat’s total length. Paws are fairly large. The head is small, with small rounded ears and a long neck. The jaw is short and deep with powerful canines, which are slightly grooved. Colour and size vary a great deal geographically. The colour of the fur can be rufous to buff to bluish grey along the back and sides with lighter coloured belly, throat, chest and inner leg. It has a black-bracketed nose and a dark-tipped tail.

Measurements vary not only with location, but also between the sexes. Males are generally one and a half times the size of females. Cougars in the north are larger than those further south. In the north males can be over two metres long and the smaller females just under two metres. Northern males weigh 70 kg or more, females around 40 kg or more. It is the second largest cat in the Americas, the largest being the jaguar.

North-western Canada, western USA, Mexico, Central and South America. The geographic range of the cougar is the largest of any terrestrial mammal in the western Hemisphere. At one time it included all of North America, but has virtually disappeared from the entire eastern half since European colonization. Although greatly reduced it still has an extensive range. Its northern limit is the Yukon border at 60° North. In Canada it occurs in British Columbia, the Rocky Mountains of Alberta and in northern Manitoba. Occasional sightings in eastern Canada are unsubstantiated. Its range continues south through the mountainous areas of the western United States. A small isolated pocket may still exist in Florida (P.c. coryi). It occurs in Mexico, Central America and much of South America, extending south to Patagonia, Argentina. All North American cougars are essentially the same species, although there are some genetic and morphological differences related to geographic location. In North America, it is more commonly referred to as cougar or mountain lion, elsewhere as the puma or panther.

It is carnivorous, specializing in medium to large game, deer being the preferred prey. Deer species include mule and white-tailed deer, elk (Wapiti) and moose. In the north, prey also includes sheep, rodents, hare, and beaver or anything it can catch, including birds. In the tropics it also eats monkeys, coatis and other small to medium mammals, such as capybara. They have been known to prey on domestic stock.

They are polygamous and breed at any time of the year. Males usually have large home ranges and their range may overlap with those of several females. In attempting to mate with as many receptive females as possible, males travel many kilometers in search of mates. They also try to maintain exclusive breeding rights to females within their territory and are fiercely competitive over them. Males and females pair for the season and during this time he continues to fight off any rivals. Females are seasonally polyestrous and usually give birth every other year. They are very vocal when in estrus, giving off loud, hair-raising screams. A litter of two to three young is born after a gestation period of 92 to 96 days. Prior to the birthing process the female separates from the male and selects a protective den amongst rocks or in thick vegetation. At birth the kittens weigh between 226-453 grams and are approximately 30 cm long. They grow quickly and their eyes open at eight to ten days. They have fluffy, spotted coats and a short ringed tail. The mother nurses her brood for three months or more, but they are introduced to meat at six to seven weeks of age. She teaches them to hunt when they reach about six months of age. By this time their spots have disappeared and they have adult colouring. The young cubs remain with her until they are one to two years old. They leave her to branch out and form territories of their own. On occasion siblings remain together for another two to three months. Females reach sexual maturity around two and a half years and males around three years of age.

Cougars are excellent climbers. They are exceptionally agile with great jumping power; they can leap upwards over five metres and jump more than six metres in length. They can drop over 15 metres from a vantage point without injury. They maneuver easily and with great skill. With very powerful legs they are capable of rapid acceleration and can reach a running speed of over 56 km per hour for short distances. Long hind limbs in proportion to fore limbs are an adaptation for jumping and easier movement through steep canyons and ravines. Big, padded paws also help. They are good swimmers, but prefer not to enter water. They are secretive, solitary hunters preferring to stalk their prey at close range, utilizing the element of surprise rather than simply chasing after their food. Cougars have excellent vision and their hearing is good, but smell is thought to be poorly developed. They hunt by day or night. They are capable of taking large prey by lunging at victims using the strength of their powerful hind legs. With a single running jump the cougar will leap onto the animal's back, using its strong jaws and long canine teeth to kill their prey with one bite to the back of the neck. Teeth are designed for seizing, slashing and tearing. The kill is usually dragged to a sheltered spot and then partly consumed. After an initial feeding, a cougar may cover the carcass with leaves or other debris to be saved for a later meal. It is extremely elusive and a master of camouflage. The cougar is a very adaptable species and can occupy a variety of environmental niches. It lives at many elevations and may migrate to higher elevations in the summer and to lower elevations in the winter, following migrating prey. It can tolerate varying habitats and survives in many climatic ranges. It can survive in any area with adequate cover and prey.

Mankind is the greatest threat primarily through the destruction of habitat. As well, humans have attempted to exterminate the cougar through hunting, poison, and trapping.

They are still legally hunted in many western U.S. states. Hunting is prohibited in some countries and regulated in others. It has been extirpated from large areas of its historic range and continues to be declining in numbers. Mortality rate among kittens is high after separation from the mother. Natural predators are bears, jaguars and wolverines.