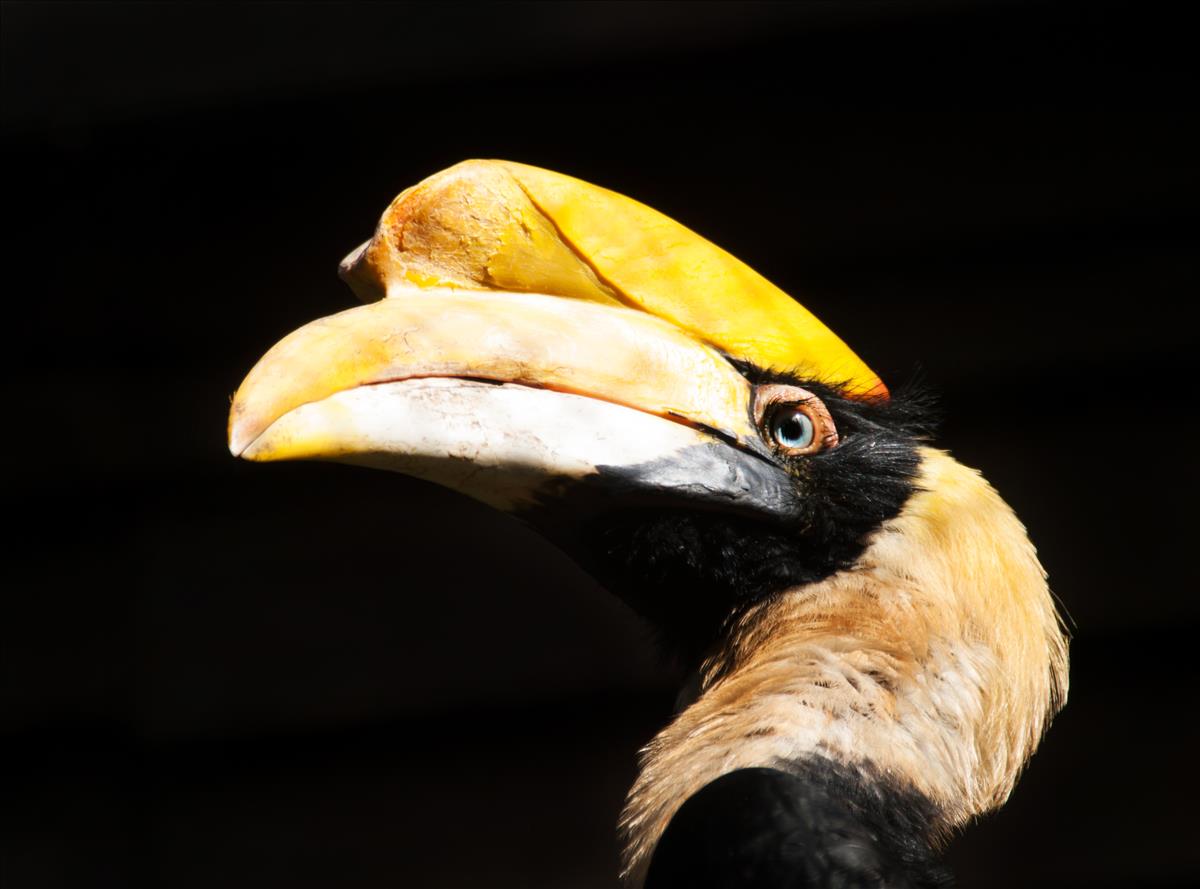 A large black and white hornbill with an enormous horn shaped yellow bill surmounted by a concave-topped casque, broadly U-shaped when viewed from the front. The female is similar, but slightly smaller and with a smaller bill and casque. Young in the early stage are without the casque but rudiments of it appear when they are about six months old. Sexual dimorphism is evident as males have red coloured eyes while females are clear coloured. Face, back, under parts, and wings are black, the last with double white bars. Neck, lower abdomen, upper and under tail coverts, and tail are white, the last with a broad black sub terminal band.

India and Southeast Asia including Indonesia.

This species frequents evergreen and mixed deciduous forests, ranging out into open deciduous areas to visit fruit trees and ascending slopes to at least 1,560 m. The abundance of this species tends to be correlated with the density of large trees, and it is therefore most common in unlogged forest. It is largely arboreal and frugivorous, occasionally descending to the ground to pick up fallen fruit. They are often found in banyan or ficus trees in forested valleys and hills.

Fruit, mainly wild figs as well as nutmegs and drupes (fleshy fruit with a hard pit), some of very large size. It will also consume miscellaneous animal items such as lizards, snakes, rats, and nestling birds marauded from tree holes. When too large to manage, the struggling victim is battered into submission, then flicked up into the air from the bill tip, caught in the gullet and bolted down.

Breeding season is March-April in the Himalayas; February-April in south-west India. The nest is an unlined natural hollow in a giant forest tree, 18 to 25 m up. Eggs are coarse textured and white or creamy white, with one or two laid per clutch. The average size of the eggs is 45-65 mm. The entrance of the nest is walled up by the female from within with an amalgam of her dung and remains of figs, bits of leaves and sticks, supplemented with wet mud brought by the male. This dries to the consistency of sun-baked clay. A narrow slit is left in the wall through which the male feeds the female throughout the period of her self incarceration, and through which she, and later the young birds, shoot out their wastes with some force. Location of the nest is often betrayed by this and the remains of food littered on the ground below. Period of incubation is around 31 days .When the chicks are about two weeks old, the wall is broken down, the female makes her exit having moulted her retices and remiges while imprisoned within. The wall is rebuilt as before, and both parents can now forage for the young. The young break out when older without help from their parents.

This bird moves along boughs by quick, ungainly but buoyant sideways hops, bouncing lightly to a higher or lower perch from one branch to another. It covers enormous feeding circuits in the course of a day and is remarkably punctual in its visits to the various trees, as it follows the same route each day as if to a fixed timetable. Flight is laboured and very noisy; three to four deliberate flaps punctuated by spells of sailing on outspread wings with up-curved tips and an expanded tail. It occasionally flies at great heights and for considerable distances across forest clad valleys. It roosts at sunset on the same route day after day, the birds following one another, strung out irregularly 20 to 100 metres apart. They roost among the topmost branches of lofty thinly foliaged trees, individuals not clumped together but distributed over several neighbouring trees. They roost with three or four birds in each tree, a few metres above or below one another. They constantly change positions till late in the dusk. They sleep with the neck pulled into the shoulders and bill pointed at an upward angle.

Logging is likely to have impacted this species throughout its range, particularly as it shows a preference for forest areas with large trees that may be targeted by loggers. Forest clearance for agriculture is also likely to have contributed to declines. It is particularly susceptible to hunting pressure as it is large, visiting predictable feeding sites such as fruiting trees. Its casques are kept or sold as trophies.