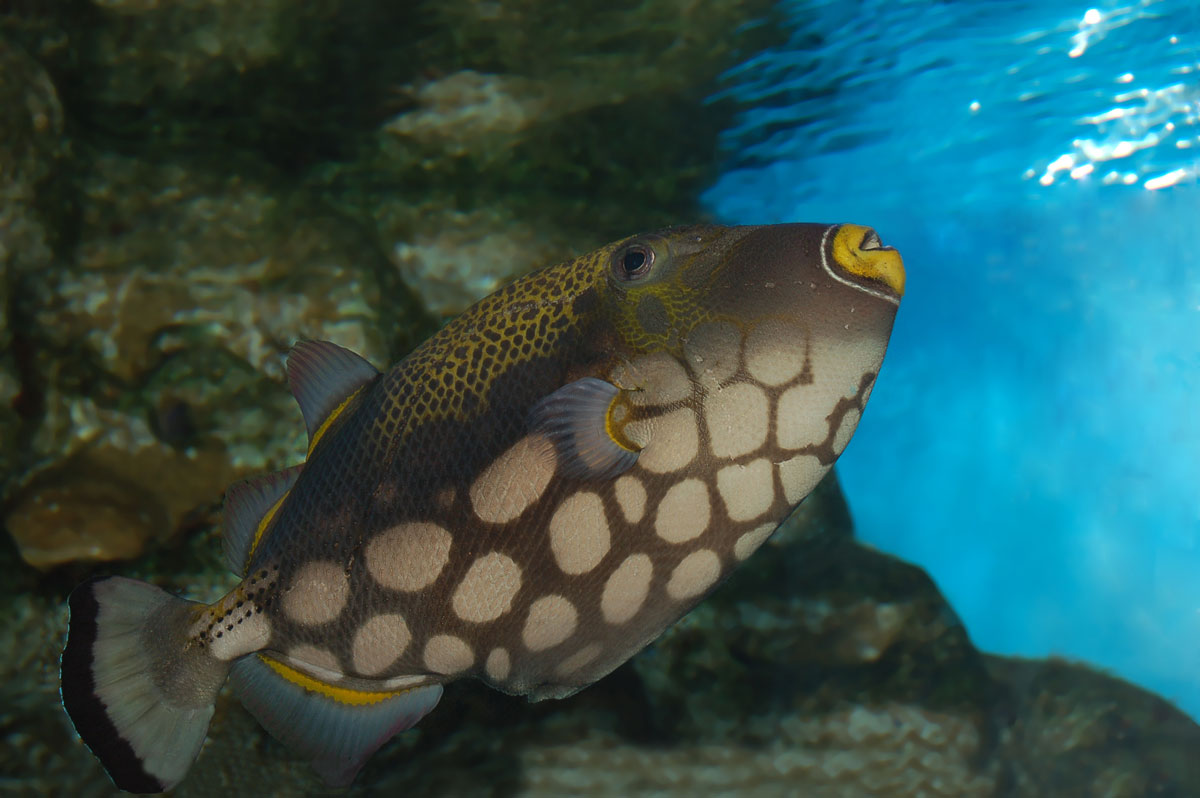 These beautiful fish can reach lengths of up to 50 cm. The body is dark brown to black with white spots of various sizes on the lower half. There is a light coloured section - like a saddle - with darker marks on the top of the body. The lips are bright yellow or orange. There is a narrow white stripe around the mouth and another white stripe below the eyes. There is a vertical white stripe on the caudal fin. The Clown triggerfish has two dorsal spines, a large one and a small one. The eyes of the fish are set high on its head, and each moves independently so the fish is able to scan its environment completely when looking for food. Males and females look alike. Juveniles have more spots on their bodies that fade as they mature and they lack the bright yellow/orange lips of the adult. They also tend to hide more, so they are not seen as often.

These fish are widespread throughout the Indo-Pacific. They are found off the coast of East Africa, South Africa, throughout Indonesia to Samoa, to southern Japan and off the east coast of Australia at depths of up to 75 metres.

These are marine animals inhabiting the clear waters of coastal coral reefs.

These fish breed in harems where there is one male for two to five females. Breeding will take place when the fish have reached maturity at about one year of age. The female digs a nest in the sand where she deposits her green eggs and they are then fertilized by the male. The nest is guarded by the male and he will defend it aggressively against other fish. He will continue to guard and fan the eggs until they hatch, which takes about eight days. The eggs will hatch after dark, and the young will then be cared for by the female. This spawning takes place in deep water, and the young will remain in the depths until they reach 15 - 20 cm in length. This species can live for up to 20 years.

Clown triggerfish can become aggressive with smaller fish - sometimes nipping or even killing them. They require lots of space with plenty of places to hide. These (mostly solitary) fish are very territorial. Juveniles tend to be very secretive, spending most of their time hiding from predators. When in danger, clown triggerfish will find small holes or crevices where they wedge themselves by locking the large spine on their dorsal fin upright. The second smaller dorsal spine holds the large one in place. An additional ventral spine helps to lock the fish in even more securely. Finally even the jaws can be used to grasp the edges of the crevice to provide more security. They use this wedging tactic to spend the nights safely. Pressing the smaller spine causes the larger one to disengage, and thus the name "triggerfish" was given to this species.

Adults dig holes by sucking up sand and spitting it out their gill slits. They are also able to flush out prey by blowing jets of water at the sand. Clown triggerfish sometimes grunt when escaping from predators.

Populations are stable and since these fish are ciguatoxic, they are not often caught as food fish. However, they are wanted for the pet trade.