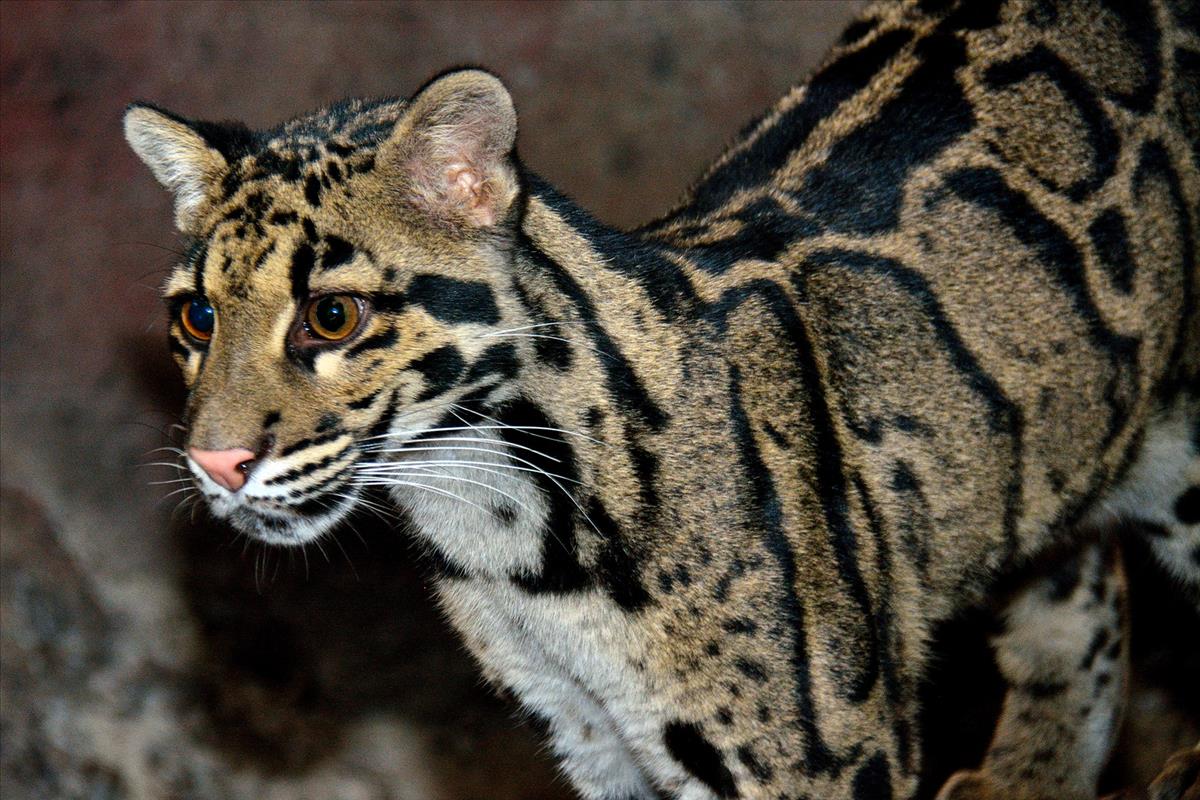 The name comes from the distinctive cloud-shaped markings of their coats which make clouded leopards unmistakable. The fur is marked with elliptical blotches of a darker colour than the background and the posterior edge of each blotch is partially framed in black. The blotches sit on a background field that varies from yellowish brown to dark gray. They form ovals, circles, and rosettes. The under parts are white or pale tawny. Melanistic specimens have been reported. The muzzle is white and solid black spots mark the forehead and cheeks. The nose-pad is pink. The ears are short and round. Two solid black bars run from behind the ears along the back of the neck down to the shoulder blades. The forehead, legs, and base of tail have dark solid spots. The long, bushy tail is ringed with black and is almost as long as the head and body. They have short, stout legs. The hind limbs are longer than the fore limbs. The paws are broad with hard pads. The skull is long and narrow. Adult clouded leopards have brownish-yellow or grayish-green eyes and the pupils contract into vertical slits. There is no marked sexual dimorphism in clouded leopards, although females are slightly smaller. In juveniles, lateral spots are solid, not clouded. These will change by the time the animal is approximately six months old. Clouded leopards weight 16 – 23 kg, with an average of 20 kg. They are 62 – 107 cm long and stand 50 – 60 cm tall.

Clouded leopards are found south of the Himalayas in Nepal, Bhutan, and some areas of northeastern India. Myanmar, southern China, Taiwan, Vietnam, Laos, Cambodia, Thailand, and mainland Malaysia make up the southern parts of its geographic range. Three subspecies are recognized, occupying different regions within the range.

Births primarily occur from March to August. After a gestation period of 86 to 93 days, a litter of one to five young, usually two, are born. Females give birth in hollow trees, ground-level dens, or other private places, which are protected from weather. At birth, the cubs’ eyes are closed. They weigh 140 - 170 g each and are completely dependent on their mother. They open their eyes after 12 days. Young will be nursed for about five months, but can eat small pieces of meat about 40 days after birth. The juvenile’s coat is initially black in the patterned areas with the adult colouration occurring at about six months of age. Young are usually born with blue eyes, which change gradually to the adult coloring. Cubs become independent of their mother at around nine months of age and attain sexual maturity at about age two for females and by age three for males. In captivity, clouded leopards have lived up to 17 years, and in the wild average 11 years.

Clouded leopards are one the most acrobatic cats in trees, and are considered arboreal. It sleeps and is said to hunt in trees springing onto the ground for prey from overhanging branches. It can climb about on horizontal branches in an inverted position, dropping directly onto its prey from above. It has the unique ability, among cats, to run down a tree head first. Very flexible ankle joints enable them to do so, ankles having a wide range of motion. As well, these cats can hang from their back feet from tree branches. The feet are large and padded with retractile claws. As in other members of the family Felidae, the radius and the ulna are not fused, which allows for greater independence of motion. Clouded leopards have a digitigrade stance. The long tail provides balance. The long, narrow skull has well-developed crests to support the jaw muscles. Clouded leopards have the longest canine teeth relative to head and body size of any of the felids; canines can reach four to six centimeters long. A wide diastema lies between the premolars and canines. Its long canines and sturdy build allow it to kill fairly large animals, like deer and boar. Although they are considered to be of an unrelated evolutionary lineage, clouded leopards have independently evolved teeth and jaws that are remarkably similar to the primitive members of the extinct group of sabretoothed cats. They have vibrissae (whiskers) on their muzzles, which detect tactile stimuli, especially at night. They are quite adept at swimming and readily take to water. Like other felids, clouded leopards have keen vision as well as good senses of smell and hearing. They mark their territories by clawing trees, urine spraying, scraping, and head rubbing, all of which are typical scent-marking behaviors. Vocalizations are characteristic of members of the family Felidae, which include growling, mewing, hissing, and spitting. Clouded leopards do not purr, but they do make a low-intensity snorting noise called “prusten” when they have friendly interactions with other individuals. Clouded leopards, tigers, snow leopards, and jaguars are the only felids that use this type of vocalization.

The biggest threat for the clouded leopard is deforestation. The second threat is that they are widely hunted for their beautiful coat and their bones and teeth, which are used for decorative purposes and traditional Asian medicine.