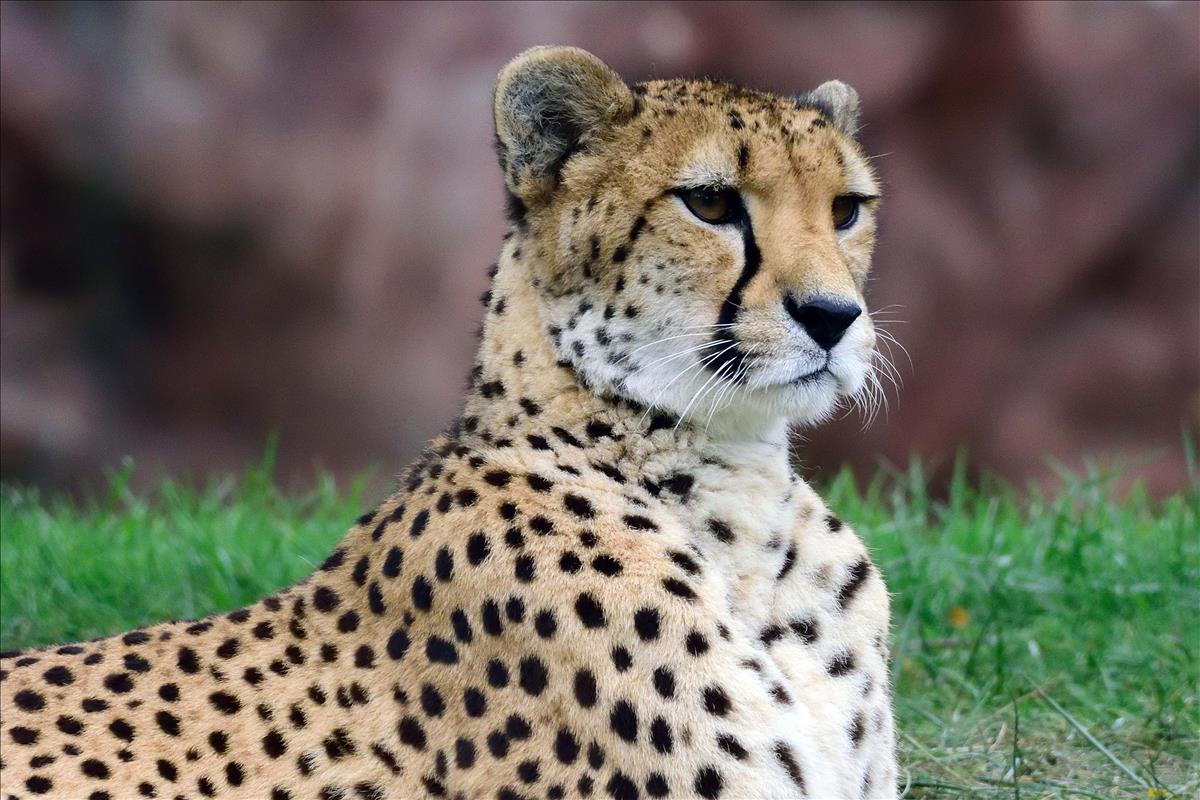 The adult cheetah is covered with small, round or oval spots, scattered singly over most of its body, only the throat and abdomen are unmarked. These solid black spots measure two to three centimetres in diameter. The spot pattern, plus the ring pattern on the tail are unique to each cheetah making each animal distinctive. The spots on the tail merge to form four to six black rings. The tip of the tail is usually a bushy white tuft.
The base coat of fur is a pale buff to a yellowish-tawny colour. They have paler to white coloured throats and abdomens. The fur on the back of the neck forms a ridge which is more prominent in the male, and in cubs. This thicker wiry hair extends over the head, neck and back forming a slight mane. The spots themselves have a longer, softer fur.
Cheetahs have long legs, a small head and ears, a long tail and a lean body. The eyes are set high, and black “tear marks” run from the inside corner of each eye, alongside the nose to the mouth. The pupil of the eye is round. They have non-retractile claws and hard pads. Adult males are larger than the females.

In Africa they are now confined to parts of eastern, central and southwestern Africa.

Open and partially open savanna. Any trees, rocky outcrops or termite mounds are used as lookout points. In Namibia they may be found also in mountainous terrain or areas of dense vegetation.

Carnivorous: Diet consists of mainly medium-sized antelope, such as Grant's and Thompson's gazelles, springbok and impala. The young of larger mammals, such as wildebeests and zebras are also taken. Hares, guineafowl and warthogs are also prey animals. They can eat up to 14 kg per day.

Breeding occurs throughout the year, but usually in the dry season, so the cubs will be born in the rainy season. The male will find a female by her scent; they will spend up to a week together and mate several times. The male then leaves and the female will bring up the young alone. Females give birth at intervals of 17 to 20 months; however if the young are lost, the mother may soon mate and bear another litter. She will give birth in an isolated spot behind rocks, under a tree or within tall grasses. The gestation period is 90 to 95 days. Usually two to four cubs are born. Cubs are approximately 30 cm long cubs weigh 150 to 300 grams each at birth. Cubs are born with spots as well as a downy underlying fur that is silver-gray in color, called a mantel that covers the top of the head, the base of the neck, and extends to the mid-back. The mother will move the cubs to several times to avoid predators.

Cub development: at 4 to 11 days the eyes open; at two weeks teeth start to come in and they start to walk; at three to four weeks they eat regurgitated food; at six weeks they start to follow the mother on hunts; at three months they are weaned; at four months the adult coat starts to come in; at nine months they are nearly full size and can outrun predators; at 10 to11 months adult teeth are in place; at 15 months the cheetah is full size and they start to wander from the mother; at 21 to 22 months they attain sexual maturity. The young stay with the mother for up to two years. There is about 50% mortality among cubs in their first year. Cheetahs live up to 12 years in the wild and up to 19 years in captivity.

It is the world’s fastest land animal over short distances. The cheetah is specialized for speed through many adaptations. It is endowed with a powerful heart, lungs with a greater oxygen capacity then other cats, enlarged nostrils and sinuses, oversized liver, and large, strong arteries. It has a small head, flat face and reduced muzzle length allowing the large eyes to be positioned for maximum binocular vision. Its body is narrow and lightweight with long, slender feet and legs, and specialized muscles, which act simultaneously for high acceleration and allowing greater swing to the limbs. Its hip and shoulder girdles swivel on a flexible spine that curves up and down (acts like a spring), as the limbs are alternately bunched up and then extended when running, giving greater reach to the legs. The cheetah’s long and muscular tail acts as a stabilizer, or rudder, for balance to counteract its body weight preventing it from rolling over and spinning out in quick, fast turns during a high-speed chase.

The cheetah has blunt non-retractile claws that help grip the ground for traction when running. Their paws are less rounded than the other cats, and their pads are hard to help them in fast, sharp turns. Cheetahs can reach a maximum speed of 80 to112 km/h which can be maintained for a few hundred metres. Chases usually last for about 20 seconds, rarely more than one minute. The cheetah does not ambush its prey or approach it within springing distance, but instead stalks the animals, then charges from about 70 to100 metres away. If an animal is overtaken, it is usually knocked down by the force of the cheetah’s charge or hooked by the cat’s dewclaw and then seized by the throat and strangled.

Teeth are small to accommodate large nasal passages and due to the smaller teeth, the bite is restricted. The cheetah must protect its kill from predators, such as hyenas and lions, and so will try to drag it into a tree or bush. They kill an average of one animal every other day and eat as much as they can at once, then scavengers such as vultures and jackals, will clean up the rest. They will only eat prey which it has killed itself (in the wild) and will not consume carrion. Cheetahs hunt during the day (diurnal), usually early morning or late afternoon, when the temperatures are cooler.

Some males live together in groups of two or three, often up to 300 km from where they were born. They will hunt together and defend their territory. Other males are solitary and tend to be nomadic. Females usually live on their own, stay closer to their birth area and are not as territorial as males. They do not roar, but do purr and make chirps, hiss, growl, and whine. The coat colour and spots are good camouflage in the grasses of the savanna, enabling it to remain hidden from both prey and predators. The black tear lines may prevent the sun from reflecting into the eyes.

Hunting by man for their beautiful furs and for trophies, as well as in retaliation for killing domestic stock has largely depleted their numbers. In Kenya, Uganda and Tanzania, cheetahs are harassed, and preyed upon, by lions, leopards, hunting dogs, and hyenas which steal the cheetah's food and also kill the cubs. Snakes are also a threat to the cubs left alone while the mother goes hunting. The cubs will starve if the mother cannot get enough meat. Living in an open grassland environment means that only 5% of Africa below the Sahara Desert is suitable. They need a large territory with high numbers of prey species, which are declining due to hunting by people and prime habitat being developed into towns and farms. Roads disrupt the habitats and divide their territories, which leads to a lack of genetic flow. The ever increasing human population is a threat. Habitat loss also contributes to their vulnerability to the larger predators.