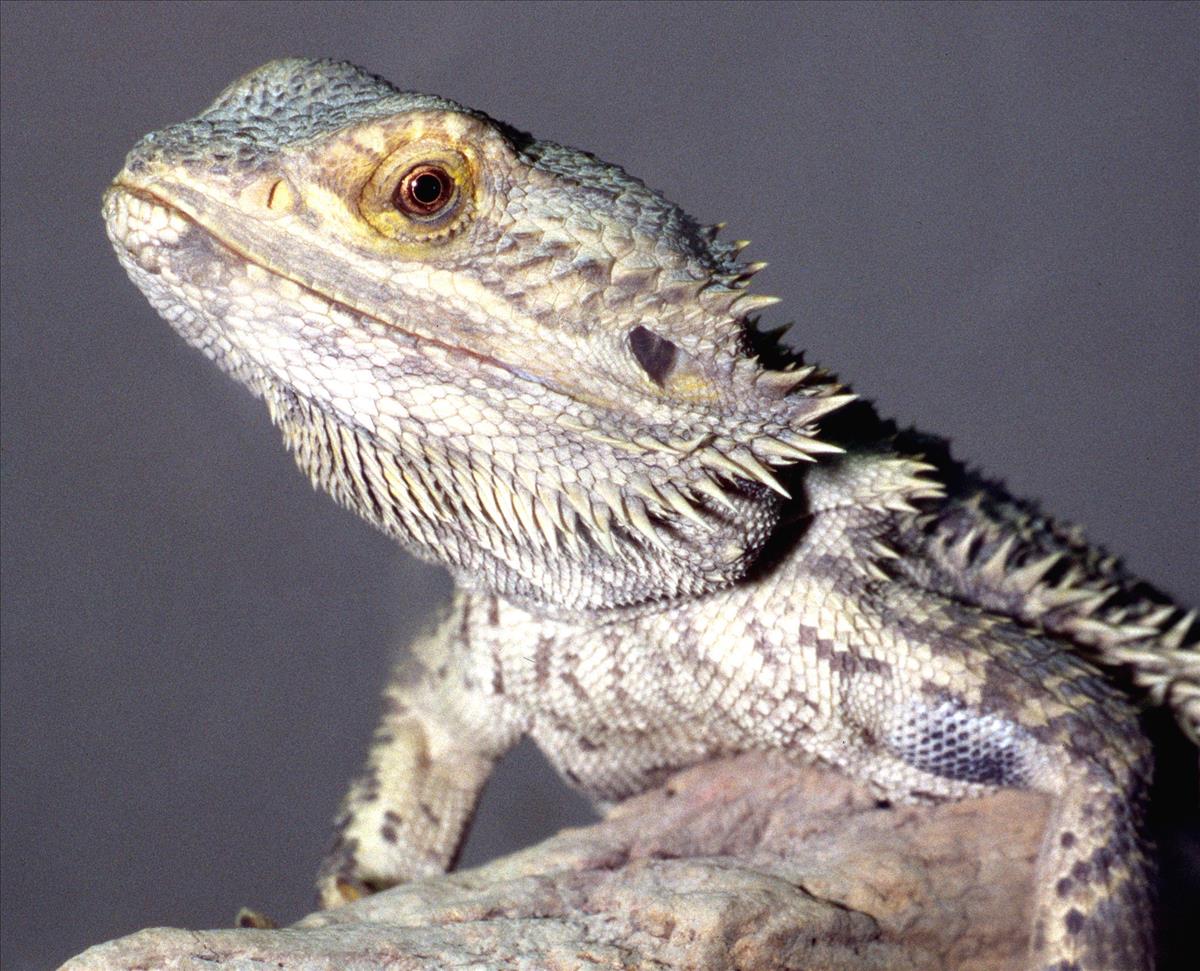 The central bearded dragon is stout and thorny in appearance and can achieve 60 cm in length. Its body is slightly flattened and an assortment of specialized scales covers the entire lizard. Most notable are the spiny projections that densely populate the skin flap (the guttural pouch). Hanging from the neck and throat it can be inflated and fanned outward into a “beard” and turned to black when the dragon is threatened. This phenomenon gives this lizard its name.

Elongated, spiky scales occur around the ear hole and to a smaller degree on the upper forelimbs and in a straight line down the top of the disportionately large head. An orbital crest rises from behind each eye, travels down the face and converges at the tip of the snout. The eyes are large and round. The open mouth reveals a pink mucous lining and a large, fleshy tongue slightly notched and sticky at its tip. A serrated, bony plate crowns the gums. An orderly row of sharp spikes runs along the flanks and tail which is whip-like and equal to the length of the body and head. This lateral fringe differentiates the various scales which cover the back from the beaded scales that protect the belly. Shingled, pointed scales cover the long, robust legs each terminating in five, thin, clawed digits.

Females are smaller than males in most respects: she has a wider body. Males have a darker, more robust guttural pouch when threatened, sets of preanal glands on their thighs and colours that are brighter. These dragons are predominantly grey with some variations toward orange, fawn, brown, and black. They are frequently yellow around the eyes and at the side of the head. Colouring is largely dependant on locality and temperature.

These lizards are found in eastern portions of the Northern Territories and in the eastern half of South Australia down to the central coast near Adelaide in Victoria.

The central bearded dragon is native to semi-arid woodland, grasslands, scrubland, and rocky desert. It is only semi-arboreal sharing its time between trees and the ground where it can be seen on fallen branches, fence posts, and rocky outcrops. The young live in trees and shrubs.

Living where food is not plentiful, these lizards are opportunistic omnivores. They can consume large amounts of plant matter, which they prefer, as well as insects and occasionally small rodents and other lizards.

Mating takes place during the Australian spring and early summer when the weather is warm and food is plentiful. Body movements play an important role in bearded dragon courtship rituals. Males attempt to intimidate rivals by inflating their darkened beards and violently bobbing involving their entire bodies. Submissive males will wave a forelimb. If both males bob, a conflict ensues which may lead to fighting. Females who do not wish to mate or who have already mated successfully (gravid) will refuse a male by hissing, darkening their beards, chasing him away or even climbing on his back. Consenting females show their interest by slowly waving an arm and gently bowing. The male, in return, will darken his inflated beard, sometimes to black and bob violently, then grasp the back of her head and wrap his forelimbs around her upper torso and insert one of his hemipenes into her cloaca. Copulation is short and he takes no further interest in her.

Bearded dragon females are capable of delayed fertilization and may lay several clutches of eggs from one sexual encounter. Gestation lasts for approx. 18 weeks at which time she digs a shallow nest in the warm sand in a sheltered, shaded location. Into it she deposits 11 - 30 oblong eggs. After she has buried them, there is no further maternal involvement. Incubation lasts from 60 - 80 days depending on temperature.

The youngsters are totally arboreal until they reach maturity. Here they remain where dew can be lapped from leaves and food is abundant. Their earthy tones of grey, reddish brown, orange, and yellow are more vivid than adults and in blotches from nape to hips. There is obscure banding on the proximal end of the tail (nearest the body). The ventral surfaces are pale to dark grey with elongated white spots. They are sexually mature in approx. 18 months.

Central bearded dragons are semi-arboreal once they reach maturity and spend as much time in the trees as on the ground. They are excellent climbers and runners aided by their stout legs and long, clawed digits and with these, bearded dragons can ascend to basking sites, watch for danger, and move easily among branches. On the ground their colouring allows them to blend into their surroundings. These young dragons constantly shed their skin in shreds and patches as do adults every six to eight weeks. Their large head, gaping mouth and spiny body covering, particularly the formidable beard which they inflate by pushing their neck muscles forward while in a defensive stance, helps them dissuade predators.

During the cooler months of spring and summer, they can be active most of the day. As temperatures rise, they bask during the early morning or late afternoon but during the heat of the day they are inactive and take cover in crevasses, leaf litter, and underground. Loners, for most of the time, these dragons will gather in groups at favourite sunning sites. The more dominant males get the best locations. Challenges and fights often occur. They also thermoregulate by using their limited ability to change colour: brighter for cooling off, darker for warming up. Long legs lift their bellies off the hot desert surface. In full retreat, these lizards can flee on their hind limbs. While they move more slowly, cooler air flowing around their bodies lets them run for longer. Mouth gaping also releases heat.

Grasping live prey is aided by sticky saliva and the tongue’s notched tip. Food is not chewed but crushed by their sharp gums and strong jaws. The facial crest helps collect moisture from leaves, channeling it to the lips and mouth.

In the evening dragons can be found on sun-warmed roadways; rocky niches, leaf litter, and empty dens that keep them warm at night. During extended periods of cool temperatures, they will again occupy abandoned burrows or crevasses and enter a state of torpor. Tail fat is a source of food during such times.

Central bearded dragons have developed an intricate system of hand waves and head bobs to communicate. Slow bowing and a hand wave indicates a female’s willingness to mate; fast bobbing proclaims dominance; a hand wave from a male communicates submission to a dominant male. Hand waving can also indicate species recognition; violent bobbing involving the whole body signals a male’s sexual excitement. Males can darken their beards more so than females; in general it is an indication of emotional agitation.

Aside from their natural predators such as snakes and birds of prey, these lizards have no significant threats. They are favoured by the pet trade but have been banned from export by the Australian government.