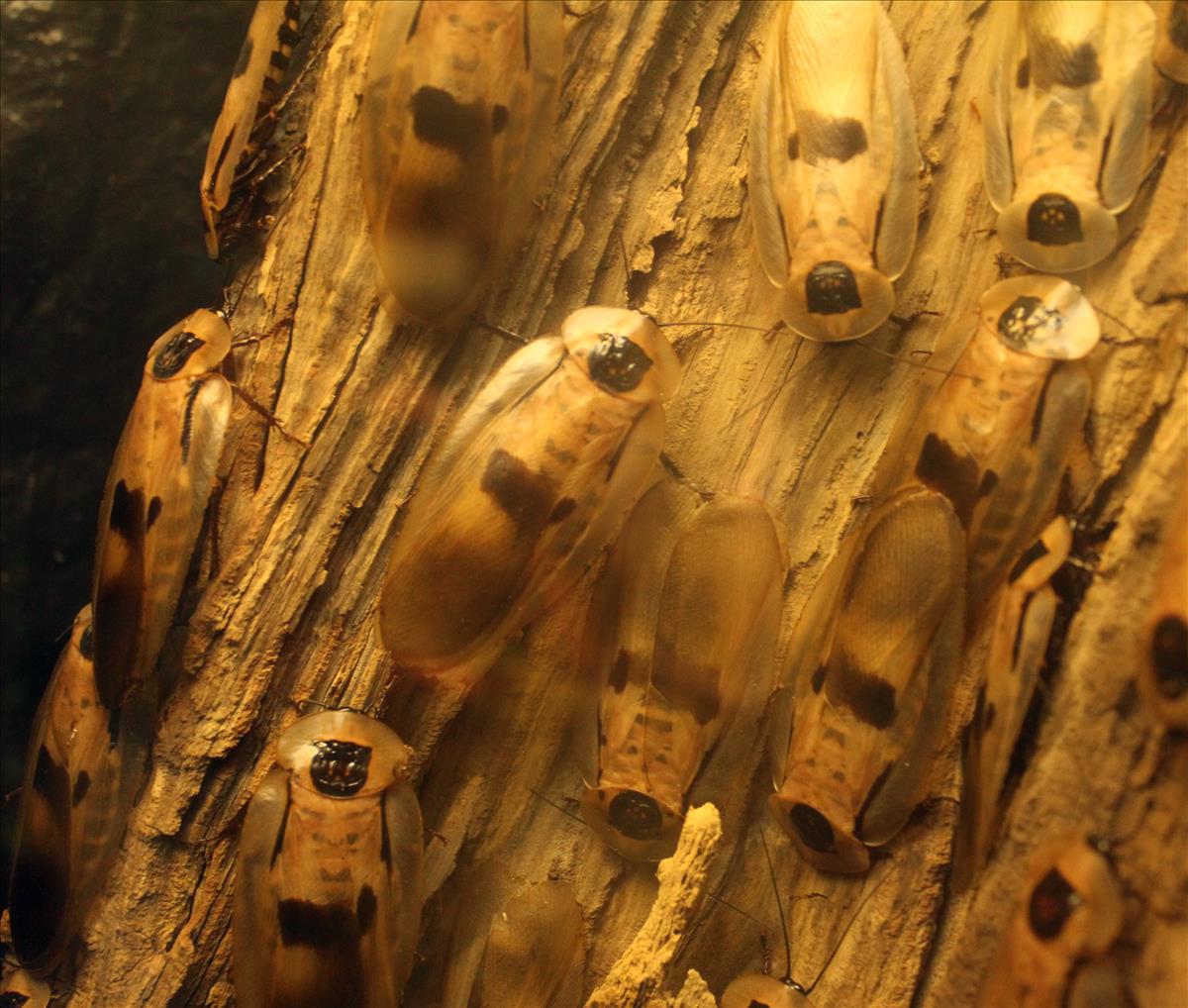 The Brazilian cockroach is one of the largest of over 4000 species of cockroaches. Its morphology is similar to grasshoppers, crickets, katydids and stick insects, but mostly to mantids and termites, which are their closest relatives. The body is flat and oval. They have three pairs of legs, and two pairs of wings, the forewings being light brown in colour. Both sexes have wings. Males and females have cerci, which are sensory structures, extending from the rear of the abdomen, however only the males have a pair of hair-like styli found in-between the cerci. Males have one additional abdominal segment. Females can grow to 10cm and males to 7.5 cm.

Found from Costa Rica and Panama to parts of northwest South America and the West Indies.

The giant cockroach is an omnivore and a scavenger, surviving on such things as bat guano, rotting wood, fruit, seeds, decomposing vegetation, dead insects, and other animals.

Prior to mating, the female emits an explosive sex pheromone, which initiates long courtship rituals in males. The male raises his wings at right angles to his abdomen, and begins trembling his abdomen. If the female is enticed, the pair then join, in an end-to-end position, which they may stay in for several hours. Males will often fight over the females, sometimes to the death. When mating is complete, the female is pregnant for life. Eggs are retained within the female in a compartmentalized case, or ootheca. The eggs are incubated for about 60 days, with up to 20 eggs being held internally in the brood pouch (ootheca). Just before hatching, the female expels the ootheca, allowing the offspring, or nymphs, to crawl out of their eggs. The ootheca then becomes the nymph’s first meal, before they burrow into soil or rotting wood, where they will remain elusive until they reach sexual maturity (about eight months, or after seven to eight sheddings). At times the eggs hatch before the ootheca can be expelled, which has helped to fuel the rumor that cockroaches give birth to live young. Adults can live up to 20 months.

Cockroaches are sensitive to light, and prefer dark, damp habitats. The leg bristles and antennae are used for seeing and feeling, which are helpful in their dark hideaways, while their flat bodies enable them to hide in crevices and underneath rocks. Cockroaches do not have lungs to breathe, but instead they take air in through spiracles, which are tiny holes on the sides of their bodies, and are used to send oxygen to other parts of the body. This allows the cockroach to survive for a period of time without its head, until it dies of infection, starvation or dehydration. The cerci can sense minute air movements, enabling the cockroach to rapidly detect and flee from potential danger. An oily, slippery outer skin, called the cuticle protects them from dehydration. When threatened, the giant cockroach is able to produce a foul smell to ward off predators. One interesting adaptation is that the nymphs tend to stay under loose substrate on the ground. This is an adaptation to avoid predation by army ants. During a raid of army ants, all exposed animals are killed and eaten. The ants move on and the hidden nymphs survive and mature to continue the colony.

Cockroaches play a very integral ecological role in their rainforest homes, by helping to decompose forest litter and animal fecal matter and are, in turn, food for many other animals. The cockroach dates back over 200-300 million years, and is one of the most adaptable and resilient of all animals.