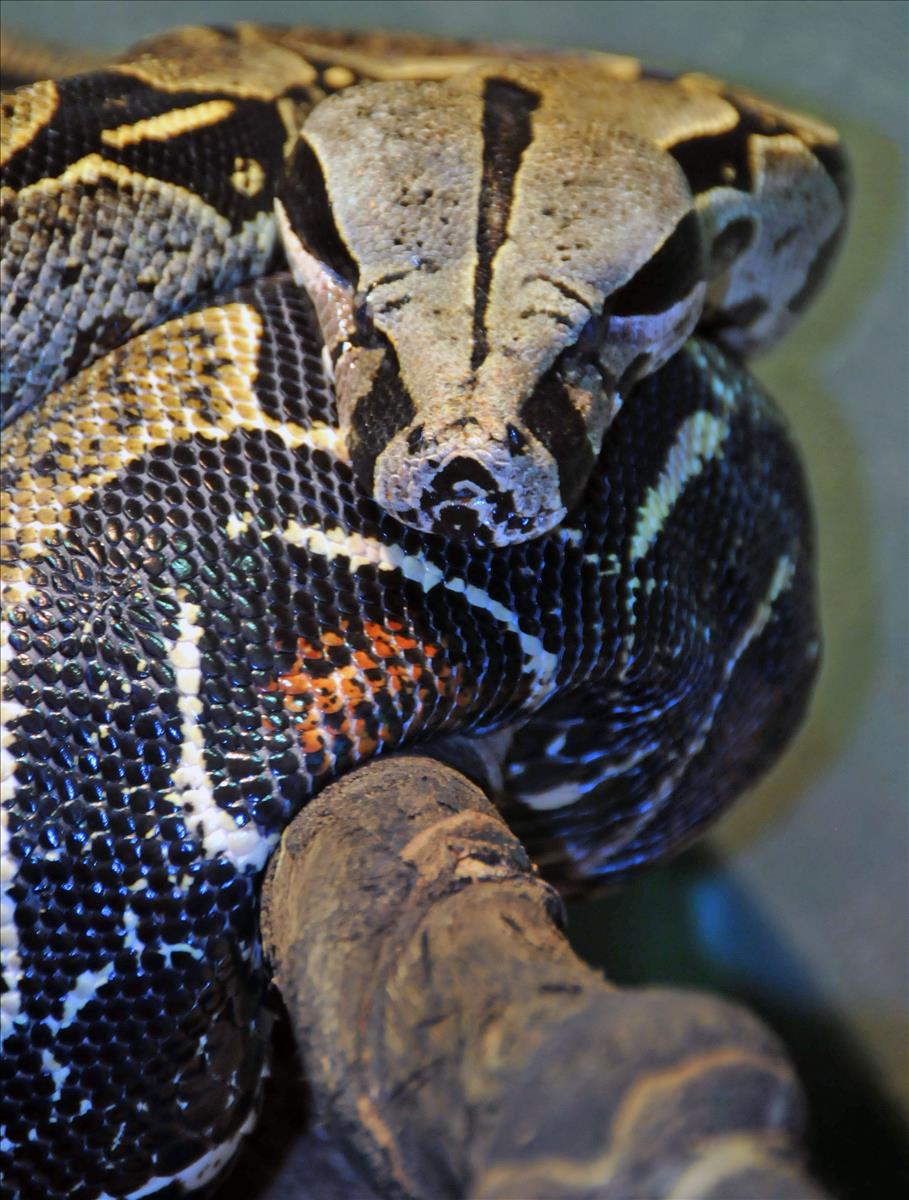 Boa constrictor coloration and pattern are distinctive. Dorsally the background color is cream or brown and that is marked with dark "saddle-shaped" bands. These saddles become more colorful and prominent towards the tail, often becoming reddish brown with either black or cream edging. Along the sides, there are rhomboid, dark marks. They may have smaller dark spots over the entire body. The head of a boa constrictor has three distinctive stripes. First is a line that runs dorsally from the snout to the back of the head. Second, there is a dark triangle between the snout and the eye. Third, this dark triangle is continued behind the eye, where it slants downward towards the jaw. However, there are many variations on appearance. Boas have two functional lungs, the right much larger than the left, to match their elongated body shape. Sharp, long teeth are found on both the upper and lower jaws and curve backward towards the throat.

This new world snake has an average length of two to three metres while the largest ever recorded was 5.5 m. Sexual dimorphism (difference between males and females) includes females generally being larger in body length and girth, whereas males generally have longer tails (containing the hemipenes) and longer cloacal spurs (vestigal hind legs).

Boa constrictors range from northern Mexico south through Central and South America. In South America the range splits along the Andes mountains. To the east of the Andes, they are found as far south as northern Argentina. On the west side of the mountains, the range extends into Peru. Boa constrictors are also found on numerous islands off the Pacific coast and in the Caribbean. Islands included in the boa constrictor range are: the Lesser Antilles, Trinidad, Tobago, Dominica, and St. Lucia. Some islands off the coast of Belize and Honduras are also inhabited by this species.

Ranges from tropical rain forest to semi-desert. In Mexico it is found in semi-arid regions, on the fringes of deserts. In tropical America it is found in the dense, wet jungles (rarely entering water). They spend much of their time in trees but are also found near cultivated land and plantations. They will enter villages in search of food.

Prey items include large lizards, birds, and small mammals (bats, monkeys, squirrels, opposums, rats, pacas, agoutis and wild pigs). There have been occasions where fairly large animals have been taken. Those boas entering villages would take rodents and chickens.

Seasonal changes trigger breeding behaviour. This generally takes place in the dry season. During this period the female emits a scent from her cloaca. Females do not necessarily reproduce annually. Boa constrictors are ovoviviparous; embryos develop within their mothers' bodies. This places a great physical demand on females and a period of recovery is needed after the birthing process to restore fat reserves.

Males are polygynous, mating with more than one female. Boas are considered to be primitive snakes. Both the male and female have a pair of spurs, one on either side of the cloaca. The male's spurs are longer than the female's. He uses them to stimulate the female by scratching her body, especially around the cloaca. When ready to mate, the male inserts one of his two hemipenes into the female's cloaca. Fertilized ova are retained in the female's body for incubation. Young are born live (ovoviviparous). Up to 60 young are born, about 30-40 cm at birth. They are independent soon after birth.

They are nocturnal; however they may bask during the day especially when night-time temperatures are low. Boa constrictors have good vision, even into the ultraviolet spectrum. In addition, they can detect both vibrations in the ground and sound vibrations through the air through their jaw bones.Their tongues flick continuously, bringing odor molecules into contact with the chemosensory (vomeronasal) organ in the top of their mouths. In this manner, they constantly sense chemical cues in their environment. They are excellent climbers. They capture prey by striking with their mouth open and holding on to the prey with its teeth. It then kills its prey by coiling its body around the prey and constricting, which restricts breathing and causes heart failure. The victim is seldom crushed or noticeably deformed before being eaten, but if the prey is large, the snake may crush the ribs to facilitate swallowing. Blotched or reticulate pattern forms an excellent camouflage. Boas react to danger either by fleeing or threatening by hissing; a noise that sounds like escaping steam.

Young boas are preyed upon by many carnivorous animals. Boas are also suffering from loss of habitat, destruction of the forest, the skin trade and the pet trade. Overcollection for the pet trade and needless direct persecution has had an impact on some populations. Some populations have been hit harder than other, and various wild populations are now endangered, particularly those on offshore islands. On the mainland, boa constrictors have been harvested for their skins, meat and body parts.