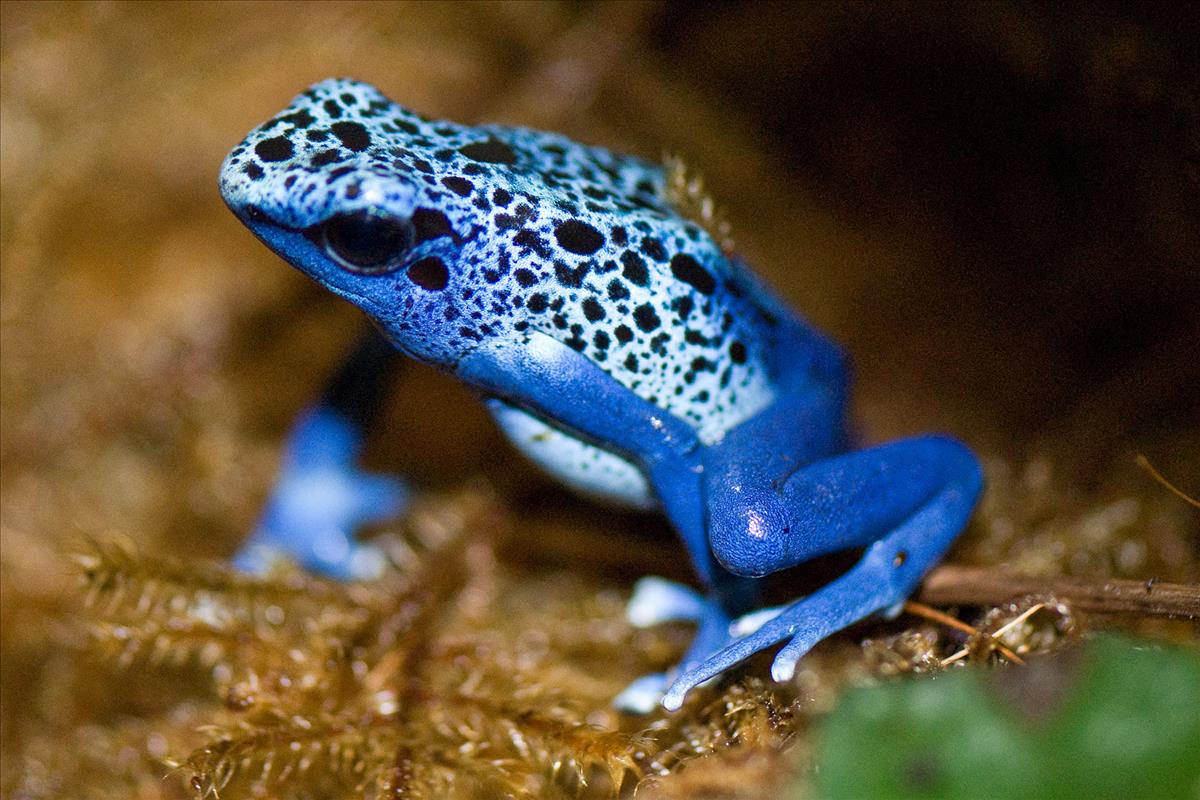 This beautiful frog has an azure-blue hue on the limbs, a sky-blue on its dorsal surface, and a darker blue on its ventral surface. An irregular pattern of dark blue and black spots of various sizes cover this background coloration with the majority of the spotting located on its back as well as head. The pattern of spots is unique to each frog and thus serves as a "fingerprint" to differentiate between individuals. Sometimes, the ventral surface of the body has a dark blue or black mid-belly stripe. Its skin is generally smooth, but often portions of the posterior ventral surface and thighs have a granular texture. It is a mid-sized dendrobatid frog weighing about three grams. Males and females are quite similar in appearance. However, the female is slightly larger and is plumper than the male, with her average body length about 4.5 cm and his only 4 cm. This species is characterized by its hunch-backed posture. Each toe has a wide, flattened tip and a suction cup pad used to help it grip in the slippery environment it inhabits. Males have larger toe-tips, specifically those on the second, third, and fourth digits. In addition, these toe-tips are heart-shaped in males and round in females.

It is found only in the southernmost part of the South American Republic of Suriname in a region known as the Sipaliwini Savannah.

It inhabits small isolated forest areas surrounded by the dry, prairie-like savannah at elevations from 315 to 430 m. However, the forest habitat of D. azureus is rather humid and warm with temperatures ranging from 22 to 27 º C during the day to 20 º C night. It prefers a dark, moist environment, living only near small streams among moss-covered rocks. It typically remains on the ground, but has been found in trees at heights of up to five metres.

D. azureus is an insectivore, but also eats non-insect arthropods. Diet consists of ants, beetles, flies, mites, spiders, termites, maggots, and caterpillars. In captivity, its diet consists primarily of crickets and fruit flies. Interestingly, the toxic compounds (poisons) in the skin of D. azureus, known as lipophilic alkaloids, are found in high percentages within its prey, especially in ants. Thus, upon eating prey, the alkaloids provide the precursors to skin toxin which makes the frogs unpalatable to predators. In captivity, this species loses its poisonous properties due to the lack of toxic compounds within the food it is fed. Tadpoles feed on unfertilized eggs provided by their mother.

Breeding usually occurs during the rainy season. Males position themselves on a rock or a leaf and produce quiet calls in order to attract a female. Females follow these calls to locate the male and fight aggressively over him. The victorious female courts him by gently stroking his snout and dorsal surface with her forelegs. Courtship may also involve chasing and wrestling between the male and female. The male leads the female to a sheltered location to mate and lay eggs. Both the female and male moisten and clean the place where the eggs will be laid. These fully yolked eggs are laid on land. The clutch size relative to other frogs is quite small; between five to ten eggs per clutch. After about 14 -18 days of tadpole development he carries the tadpoles on his back from the egg-laying land site to a small pool of water. This water may be in the center of a bromeliad plant, a leaf axil, or a tiny tree hole. The female frequently visits the tadpoles to lay unfertilized eggs providing them with food. Once the tadpoles metamorphose into froglets, the parental care of the female ends and the young frogs are on their own. Metamorphosis from tadpole to froglet takes 10 to 12 weeks. Both sexes reach sexual maturity at two years of age. The lifespan is four to six years in the wild. In captivity it is known to live on average about 10 years, and can survive for up to 12 years.

Bright coloration serves as a warning to would-be predators of its poisonous properties. Another important adaptation is the toxins within its skin that are capable of paralyzing or even killing potential predators. The skin is covered with a myriad of glands that secrete alkaloid poisons. This is released on contact, attacking the neuromuscular apparatus of the predator via the bloodstream. They are diurnal rather than nocturnal. This species of frog is bold, aggressive, and very territorial, especially the males which are known to fight over territories. However, both sexes are known to defend their territories from frogs of the same species as well as those of other species. Aggressive behavior in D. azureus usually consists of calling, chases, and wrestling. Wrestling usually occurs between those of the same sex, but can occur between males and females. These frogs can make do with fewer eggs and thus spawn larger ones, which supply more yolk for each developing embryo.

Though toxic, they are still preyed upon by snakes and large spiders. Tadpoles are also consumed by snakes and dragonfly larvae. They are over collected for the pet/zoo market.