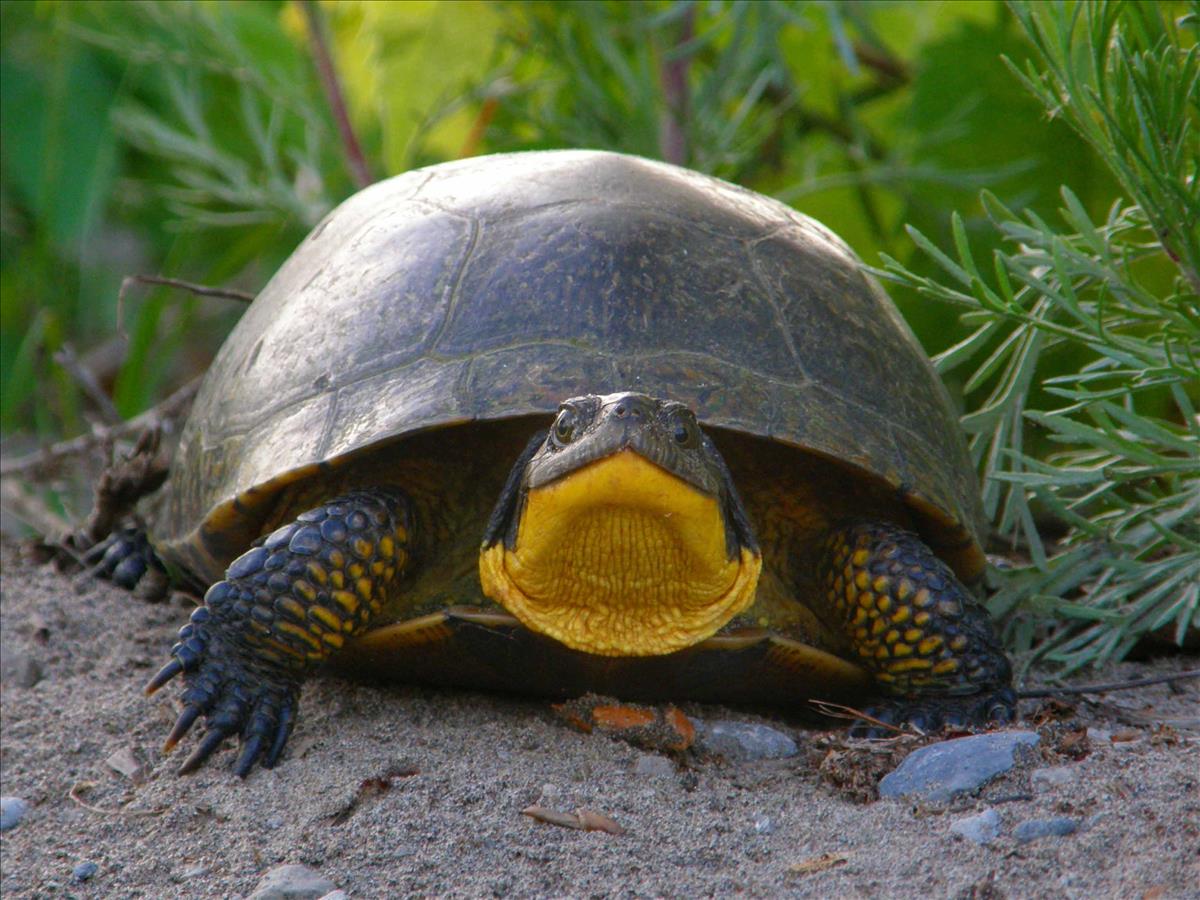 The Blanding's turtle is easily distinguished by its bright yellow throat and jaw. In native legends, it is known as "the turtle with the sun under its chin". Its carapace is smooth and domed, covering a body that measures between 15 and 25 centimetres in length. When seen from above, the carapace has an oblong shape. It is dark in colour but flecked with many yellow or light-coloured spots and streaks. The dark head and legs often have yellow speckles.

The plastron, somewhat concave is yellow, with dark blotches arranged symmetrically along it. It is sometimes called the semi-box turtle, with the plastron being partially hinged.

Males have longer and thicker tails than females. The young have a grayish brown carapace with a ridged keel. Their plastron is a black colour, edged with yellow. The tail is proportionally much longer than in the adults.

The Blanding's turtle can be found in the southern Great Lakes region, from Nebraska to Illinois to Ontario. Some populations are also found in Quebec, Nova Scotia and along the eastern coast of the United States. It is also found throughout southern and central Ontario, except in the Bruce Peninsula and the far southeastern corner. It is also found along the Saint Lawrence River in the area of the Thousand Islands.

This turtle inhabits fresh waters and can be found in shallow lakes, sluggish streams and especially wetlands where there is ample vegetation. It prefers weedy bays and marshy ponds. In winter, they prefer constantly flowing streams or spring-fed ponds where they are able to use the oxygenated moving water for respiration.

Blanding's turtles are omnivores. They will eat crustaceans and invertebrates, as well as fish, frogs, berries, and other vegetation.

Mating takes place in early spring (April - May) and nesting follows in June. They have ritualized courtship behaviour and it is the female who determines if breeding will occur. During the breeding season males stalk the bottom of bodies of water, looking for females. On finding a female he nudges and bumps her several times. He will swim to her rear and mount her, locking all four feet under her shell so he cannot be dislodged. He extends his neck to rub the females head with his chin. If she accepts the male, she will remain still and extend her tail so that he can breed her.

Females lay six to eleven eggs. She digs a nest chamber by bracing herself up on her front legs and using her hind feet to excavate her nest. Hatchlings emerge between August and September. The gender of the hatchlings is dependent on the temperature of the nest.

This turtle is highly mobile, traveling long distances between wetlands to find food or a mate. They will often perch on logs or piles of vegetation to bask in the sun. A female may travel over a kilometre from her overwintering site in order to breed and nest. As cold-blooded animals, they hibernate under or near water, in mud or vegetation during the cold months. Oxygen is absorbed by capillaries that line the mouth and cloaca. These turtles are tolerant of colder temperatures so they can remain active in early winter. They are less tolerant of heat

These are wary turtles and will dive underwater when alarmed. They are excellent swimmers and can stay submerged for hours. On land, when frightened they will usually hiss and quickly withdraw into their shells if there is perceived danger. Their partially hinged plastron offers them some additional protection against danger. They may remain withdrawn for hours. They are generally non-aggressive and rarely attempt to bite in defense.

The nests of Blanding's turtles are predated by raccoons and skunks. Cool summer temperatures result in fewer hatchlings. Blanding's turtles tend to spend more time moving some distance on land than some other species, and they are therefore at greater risk of being hit by passing cars. Habitat destruction - the draining and degradation of wetlands - has reduced the core habitats and the wetlands that may link them. Blanding's turtles are also collected for the pet trade. Since it may take up to 20 years for a Blanding's turtle to be reproductive, any loss of mature adults can significantly impact populations.