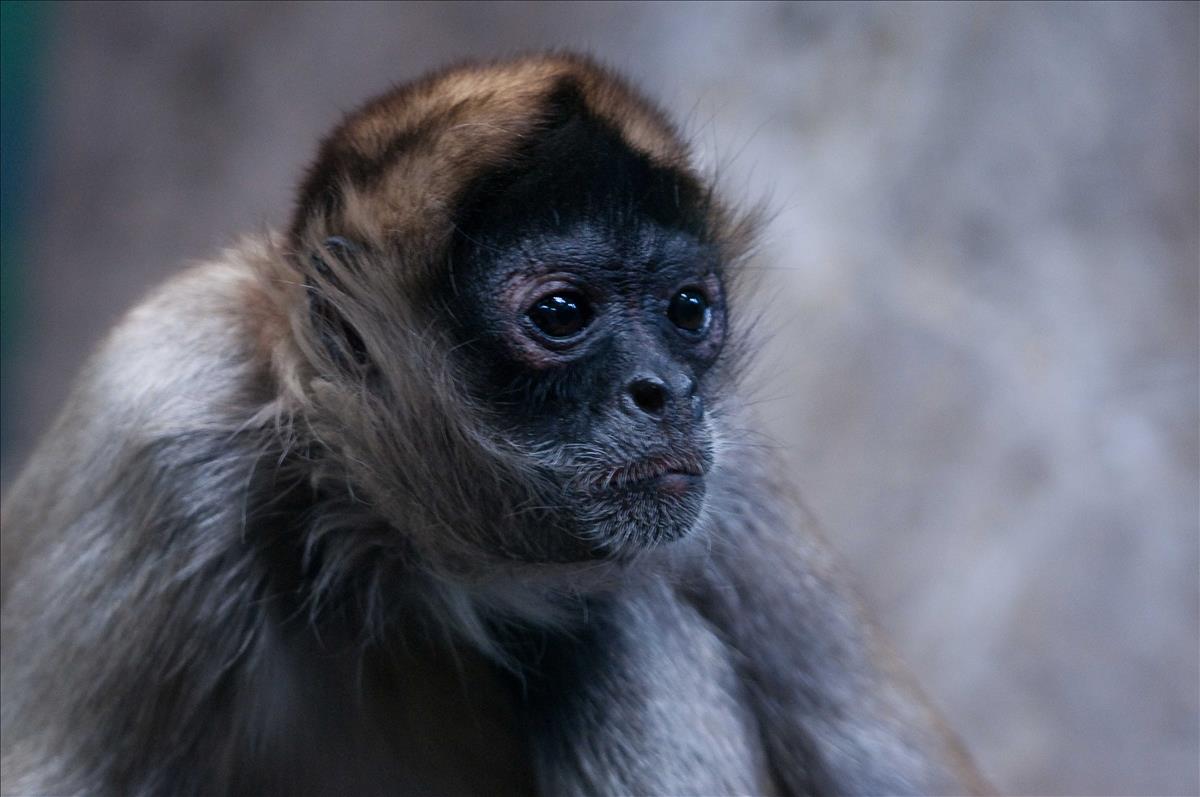 Black-handed spider monkeys are one of the largest New World monkeys. They have small heads with prominent muzzles. Their arms, legs and tail are very long in proportion to the body length. The arms are 25% longer than the legs. Thumbs are greatly reduced or non-existent. (The genus name Ateles means “imperfect”, a reference to the vestigial thumb.) The hands are hook-like. Their muscular tail is the most mobile and dexterous prehensile tail of any primate; the underside of the last 25 cm is covered with finely ridged skin (dermatoglyphics) to provide grip. As well, the tail contains sweat glands and sensory nerve endings. The nose is platyrrhini (“broad nosed”) or with a broad nasal septum. Males are slightly larger than females.

As their common name implies, their extremities (hands and feet) are covered in a very dark brown-to-black fur. The rest of their bodies’ fur colouration can vary from a yellowish-gray to dark brown to black, with golden yellow sides and a whitish or yellowish underside. The face is black, and there are light markings, or ocular rings around the eyes.

Several different sub-species of spider monkeys can be found in locations from Central Mexico to Bolivia. The black-handed spider monkey (Ateles geoffroyi geoffroyi) ranges from Nicaragua into northern Costa Rica.

These monkeys are an arboreal species, and they seldom come down to the ground. They prefer to live in the upper levels of the canopy, and are found in primary and secondary rainforest. They can be found in other forest types if habitat is limited.

They eat mostly fruit, along with nuts, seeds, buds, flowers, insects, and eggs.

There is no regular breeding season. After a gestation period of 226-232 days a single offspring is born. The young is carried on the mother's abdomen for about four months, and then carried on the back. Infants use their prehensile tail to hold onto the mother's tail. The young remain dependent on the mother until about 10 months old. Sexual maturity is reached at four years of age for females and five years of age for males. Females bear young every two to four years. Life expectancy is 25 years.

The most outstanding physical adaptations are the prehensile tail and the hook-like hands - both making the spider monkey ideal for arboreal life. These hook-like hands and long arms allow them to swing by their arms beneath the tree branches. The prehensile tail is longer than the monkeys' body and composed of twenty-three vertebrae, which gives it suppleness and strength. It is longer and narrower than any of the monkey's other limbs and can be used to reach farther and into smaller places than the animal’s arms and legs. The monkey can hang by it, swing by it, pick fruit with it, and even throw things with it. The shoulders are very flexible which allows them to swing from tree to tree. They are very vocal. Spider monkeys have one of the most highly developed larynx, giving them the ability to produce a wide range of vocalizations from bird-like calls to barking and guttural grunting. They use a repeated yap in alarm. Spider monkeys are social animals and in the abundant areas of their territory, they tend to form multi-male groups of up to thirty individuals. For the most part, these large groups split into smaller subgroups of three to four individuals to forage, so only for a few weeks out of the year is the whole group together. Group size varies with habitat type and depends largely on the productivity of the area.

Poaching for food and the pet trade. The high rate of habitat loss has greatly reduced their numbers in recent years. Other than humans, jaguars and pumas appear to be the only significant predator of adult spider monkeys. Eagles and large snakes are also potential predators.