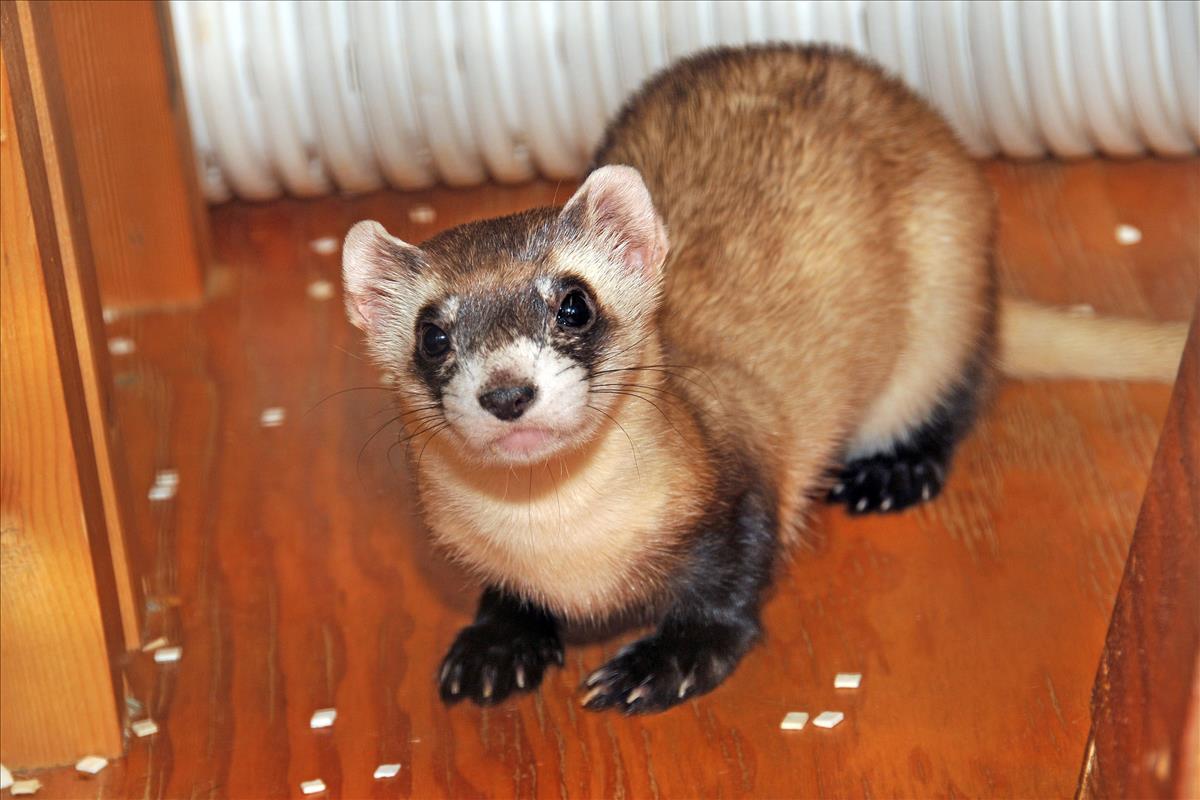 Black-footed ferrets can be identified by their black feet, face mask and tail tip. The coat is generally coloured yellow-buff with a paler underside. The forehead, muzzle and throat are nearly white. The top of the head and the middle of the back are brown. Their head and body length ranges from 38-50 cm with a tail from 11-15 cm long. Male ferrets weigh between 950-1100 g and females weigh 750-900 g. There are just three species of ferrets in the world and the black-footed ferret is the only ferret native to North America. In the wild, black-footed ferrets live up to two or three years of age and in captivity they typically live between five and seven years.

Before European settlement, this species lived throughout North America’s Great Plains. In Canada, black-footed ferrets were historically found in southern Saskatchewan and Alberta. For a few years black-footed ferrets lived strictly in captivity. Today, thanks to ongoing international collaborations, ferrets have been reintroduced to the wild at 28 sites in the US, Mexico and Canada.

Prairie dogs make up over 90% of a black-footed ferret’s diet. It is believed that ferrets will occasionally eat ground squirrels, other small rodents, cottontail rabbits, and birds.

Breeding takes place from late January until early June with most successful matings occurring in March and April. After a gestation period of 42-45 days, one to seven young are born (average of three to four) in an enlarged prairie dog burrow. Baby ferrets, called kits, emerge from the burrow in early July and separate from the mother in September or early October, by which time they are full size. Both males and females are mature at one year of age. Six facilities, including five zoos within the Association of Zoos and Aquariums Species Survival Plan (AZA-SSP), now maintain intensively managed ferret populations at approximately 310 animals to ensure the survival of the species and provide animals for reintroduction. The largest breeding facility is the National US Fish & Wildlife - Black-footed Ferret Conservation Centre, just outside Fort Collins, Colorado. To date, over 8 500 kits have been born in captivity with the majority being released into the wild. Toronto Zoo is the only Canadian zoo breeding ferrets and joined the program in 1992.

Black-footed ferrets are specialized predators that have evolved to hunt prairie dogs. Their sharp teeth and strong jaws are highly adapted for hunting prairie dogs that are often as large as the ferret itself. Ferrets also sleep, hide from predators and raise their young in prairie dog burrows. Black-footed ferrets are primarily nocturnal, although they are occasionally active in the early morning or late afternoon. They have keen senses of smell, sight and hearing and are skillful climbers. If threatened, ferrets use their sharp, non-retractable claws and powerful jaws to defend themselves. Males are territorial and secrete musk to mark their territory.

The arrival of European settlers resulted in a nearly complete conversion of grasslands to agricultural fields. Today urban and sub-urban development is also threatening black-footed ferret habitat. With extensive persecution of prairie dogs by farmers, the food supply for ferrets has dramatically been reduced. Ferrets are also very susceptible to a number of diseases including sylvatic plague, canine distemper, and human influenza that are associated with human intrusion on their habitat. The ecology of sylvatic plague is poorly understood and this disease can rapidly eliminate crucial prairie dog populations.