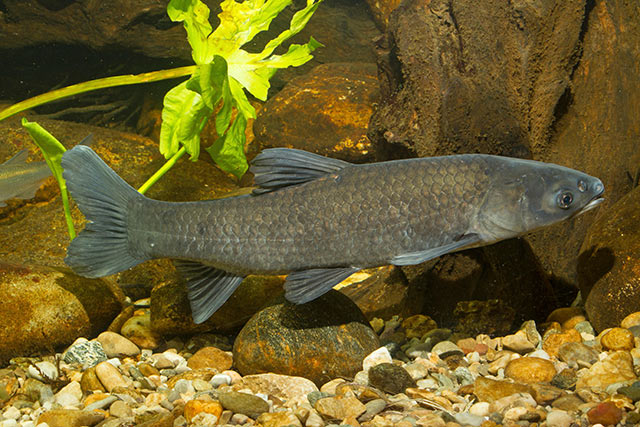 The body of the black carp is brown to black in colour, elongated and covered with cycloid scales. The dark edge of these scales give the black carp a cross-hatched appearance similar to the grass carp. Black carp have a small toothless mouth; pharyngeal teeth in the throat are used for crushing and consuming mollusks. Over their 15 year lifespan black carp can grow up to 1.8 m in length and weight up to 35 kg.

An invasive species in North America, black carp is native to Eastern Asia from southern Russia to southern China and Vietnam

An invasive species in North America, black carp is native to the lower reaches of large rivers and lakes

Zooplankton, insect larvae and detritus as juveniles, mollusks as adults

Black carp reach maturity after approximately 6 years and spawn in the lower reaches of rivers and lakes, particularly in areas of high turbulence. Juveniles feed primarily on zooplankton switching to insect larvae and detritus over time and eventually feed mainly on mollusks as adults.

Strong pharyngeal teeth found in the throat allow the black carp to feed primarily on mollusks despite having a small, toothless mouth.

Threats in the native range of the black carp include overfishing, pollution and river modifications such as dams, flood control devices and land reclamation for agriculture.