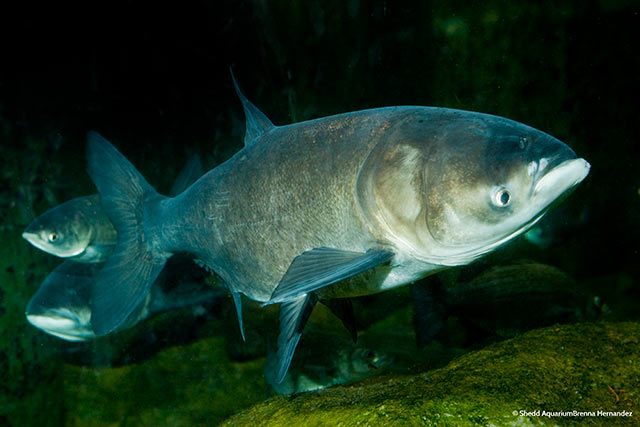 True to its name, the bighead carp has a large head and a large, toothless mouth. Unlike black and grass carp, bighead carp eyes are located very low on the head, below the central axis of the body. Grey with dark, irregular blotches, bighead carp can live over 16 years, reach 1.5 m in length and weigh up to 40 kg.

Bighead carp mature at approximately 2-3 years of age and spawn in a variety of habitats including slow moving rivers and lakes.

A very hardy species and tolerant to temperatures from 4-26oC, bighead carp can adapt to many temperate freshwater environments. Bighead carp also lack a true stomach causing them to eat constantly. Long, comb-like gill rakers allow the bighead carp to strain and consume planktonic organisms from the water.

Threats in the native range of the bighead carp include overfishing and river modifications such as dams, flood control devices and land reclamation for agriculture.