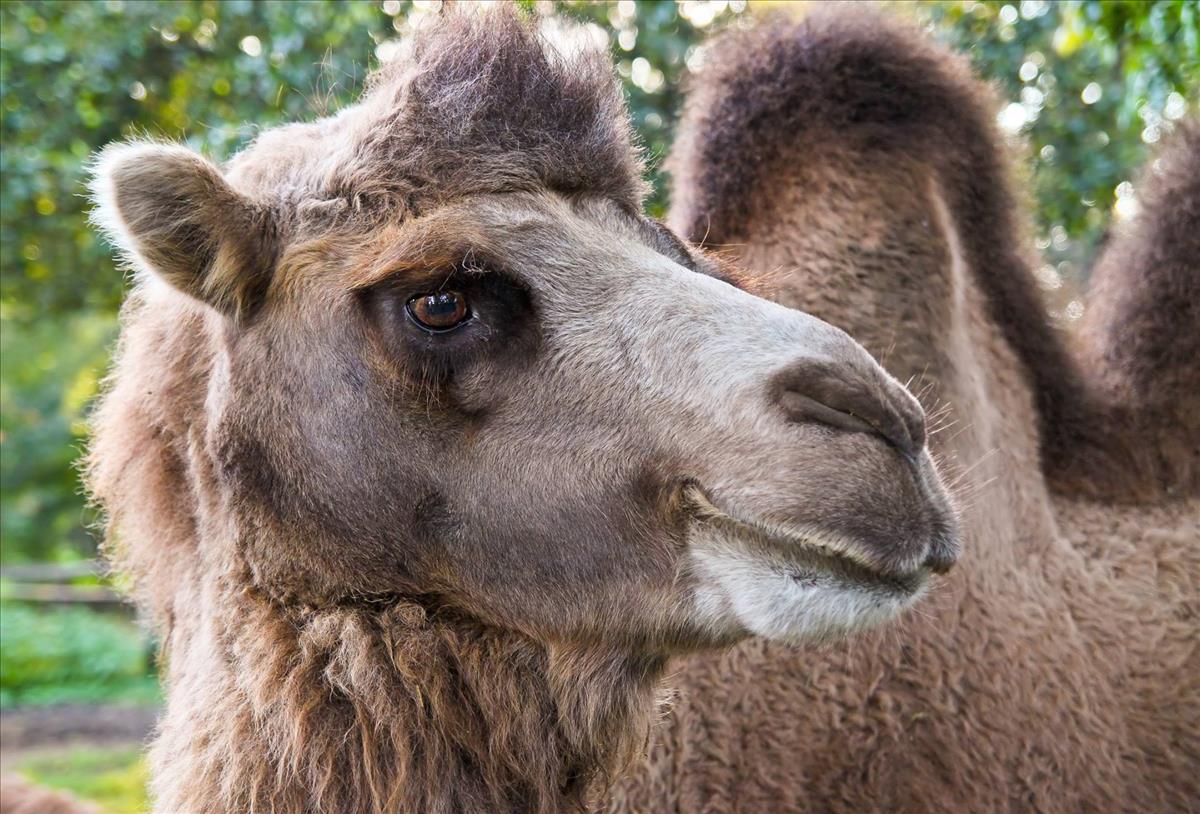 The most noticeable feature of the Bactrian camel is the two humps. Camels with one hump are dromedaries. Bactrians have thick, long shaggy coats during cold weather, which they shed when it gets warmer. This long wooly coat varies in colour from dark brown to sandy beige. Long hair hangs from the neck and gives the appearance of a beard. This mane of long hair on the neck and throat has hairs up to 25 cm long.

They have bushy eyebrows, a double row of eyelashes, and the ears are lined with hair. The face is long and somewhat triangular, with a split upper lip. Camels hind legs are attached to their body at the top of their thigh (horses and cows have their legs attached from the knee upward). The two broad toes on each foot have undivided soles. On average they are 7 ft (213 cm) tall at the hump and weigh about 1,800 lbs (816 kg).

The Bactrian camel was domesticated at least 4,000 years ago in Bactria, near what is presently Turkmenia and northern Iran. From there, their use as draft and pack animals spread into China, where they formed the main source of transportation on the Silk Road.

Bactrian camels inhabit arid regions. They live primarily in Central Asian deserts north of the Himalayas. They are found along rivers in the Siberian steppe during winter, but disperse into the desert when the snow melts in spring. Temperatures range from -29 °C in the winter to 38 °C in the summer.

The age of sexual maturity varies, but is usually reached at three to five years. Camels are polygynous. Polygynous sexual behaviour is the system in which a single male mates with multiple females, but each female mates with only one male. Dominant males defend groups of females from other males during breeding seasons. Females come into heat several times a year. Copulation takes place in January or February and the young are born after a gestation period of about 13 months, with most young being born from March through April. One, occasionally two, calves are produced. Females can give birth to a new calf every other year. The baby calf is precocial, having the ability to stand at birth and walk only a few hours after. The young suckle for a year. The young calf stays with its mother for three to five years, until it reaches sexual maturity.

A camels body temperature fluctuates drastically to regulate and conserve body fluids.
A camel's skin contains no sweat glands. Therefore they lose moisture from their bodies slowly. Needed moisture is obtained by drinking water and eating desert plants. In winter, plants provide enough moisture for camels to go without drinking for several weeks. Their feces are small and dry.
They have efficient kidneys. Even when water is available, they drink only enough to replace the water used since their last drink. A thirsty camel can drink as much as 114 liters of water in just 10 minutes. Humans lose water from their blood when dehydrated, which thickens the blood and makes the heart work harder. Camels however, lose much of their water through their tissue relieving the heart of excess strain. The reasons why water is not lost easily are: blood capillaries next to the skin have unusually thick walls, which prevent water from passing from the blood stream; and the amount of albumen in camels blood is about twice that found in humans. Albumen is a major protein of plasma, whose principal function is to retain water in the blood stream through its osmotic effect. Camels blood cells are oval shaped (most other mammals have spherical shaped cells) and expand allowing rapid water intake without rupturing the cells which would cause haemoglobin depletion or water toxification.

Bactrian camels have tough feet for crossing the rocky Asian deserts. Their tough, even-toed feet help them to travel well through snow or sand. The two broad toes on each foot have undivided soles and are able to spread widely as an adaptation to walking on sand. The long hind legs attached at the top of the thigh enables the camel to rest on its folded legs on calloused areas, keeping its body as far away from hot sand as possible.

The thick shaggy coat protects them in winter, but is quickly shed in summer. They have bushy eyebrows and a double row of eye lashes. Their ears are lined with hair. Special muscles allow them to close their nostrils and lips tightly for long periods. These features protect them from harsh, blowing sand and snow. Camels are said to be good swimmers and can run at speeds of up to 65 km/h.

Wild camels compete with domestic stock for pasture and water. They are killed for sport and for meat. Camels supply milk, meat, wool, hides, sinews, and bones.

Organizations like the Toronto Zoo or Wild Camel Protection Foundation (www.wildcamels.com) are working to help save wild Bactrian camel populations.