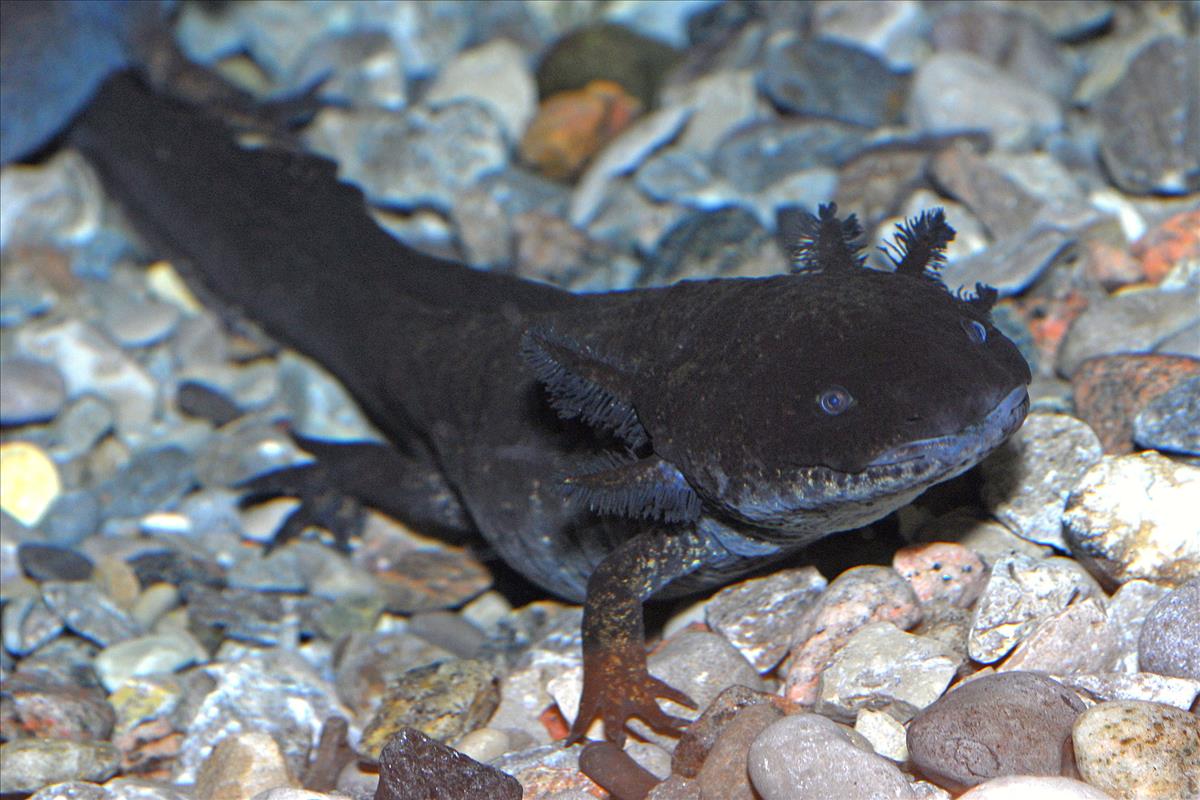 The axolotl is an amphibian, which suggests it has a double life, part water and part on land. The axolotl, however, has a preference for remaining in water as a sexually mature larva; (an adaptation known as neoteny) they do not metamorphose. The axolotl belongs to the order Caudata, since it retains its tail in adult life as other salamanders and newts. The term axolotl should be restricted to the Mexican species Ambystoma mexicanum from Lake Xochimilco, even though it is also used to describe the larval form of the tiger salamander, Ambystoma tigrinum, from western Canada and the northern states of the U.S., and is a close relation to the axolotl.

An adult axolotl has an average length of 25-30 cm although some attain a length of 40-45 cm. The colouring in the wild is gray brown, often with spots but for the aquarium trade, they are being bred in white (albino) and golden colours, even a harlequin (spotted) pattern.

As any vertebrate, the body of an axolotl is built around a skeleton but with a difference. Even in fully grown animals, it isn’t completely bony. The wrists, ankles and particularly, the support system for the gills are composed of cartilage. The number of vertebrae varies; an average of 50 of which 30-35 is in the tail region. It has a powerful musculature with the four limbs controlled by specialized muscle groups. Internally, the axolotl is similar to any other, carnivorous amphibian in principal except that the lungs are rudimentary. It has a large gaping mouth (ambystoma: ambyx=cup and stoma=mouth) with fine teeth on both upper and lower jaw. The thick tongue is fixed as in fishes. Each side of the head is adorned with permanent feathery gills. These allow the axolotl to efficiently extract oxygen while remaining under water. Large axolotls occasionally supplement their oxygen by rising to the surface to take a quick gulp of air to fill their lungs. The average lifespan of the axolotl is 10 to 12 years. In captivity, certain specimen have lived for 25 years.

The shallow lagoons and canals of Lake Xochimilco (Soo-che-mil-co).

The male axolotl matures between 6 and 12 months of age. Females tend to mature later. In the wild, the breeding season, from December to June, is probably controlled by the water temperature. The male deposits small packets of sperm, about 25 per night, and leads the female over these. The female may pick up several. Oviposition (egg laying) occurs approximately 24 hours later. There may be 300 to 1,100 eggs in one spawning. Each egg has a gelatinous coat that will help it stick to plants, sticks, and other items. The embryo develops inside the egg and transforms into a larva. After two weeks the larva has developed small feathery gills, front legs, and a long tail. Within another two weeks, it has developed hind legs and is, to all intents and purposes, a miniature axolotl.

Axolotls are solitary and are usually active during the day. They do communicate with other axolotls; visually or with chemical cues during mating. They can also detect electrical fields to investigate their environment and to discover prey. In the time of the Aztecs, axolotls (the name is derived from Atl=water and Xolotl=dog or Waterdog) provided food for the people and were also used to cure diseases such as consumption. In the mid 1800s, they came to the attention of scientists in Paris, Europe, because of their regenerative capabilities i.e. re-grow body parts lost in skirmishes. They are one of the most widely studied animals in the world being bred in many laboratories for continuing studies including embryology, neurobiology and regeneration. They are also popular in the pet trade; an unusual colourful amphibian, easy to raise and inexpensive to feed.

The axolotl has been quite successful in its stable lake habitat at least, until recently. The axolotl is now critically endangered. The quality of their habitat is being reduced dramatically. The water of the lake is heavily polluted by industry and waste water from Mexico City. Also, the introduction of game fish, carp and tilapia, has diminished the numbers.