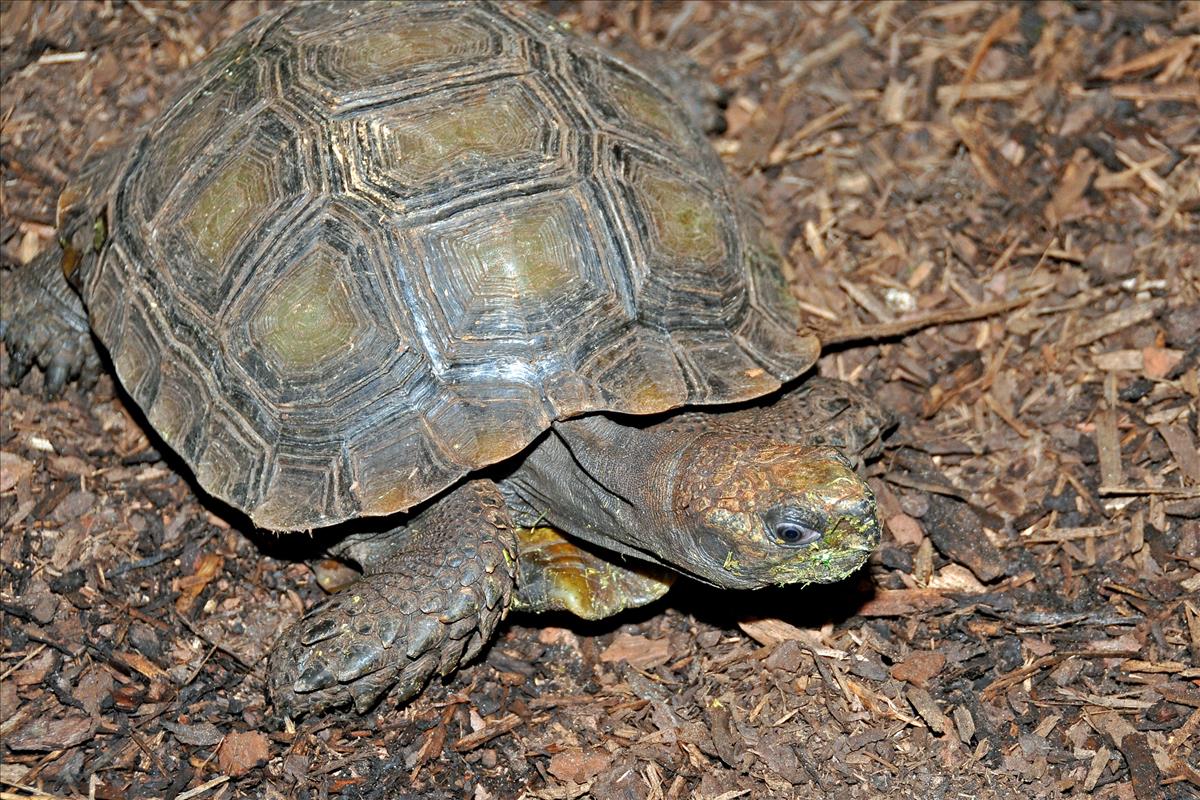 Thought to be the most primitive of all tortoises, based on molecular and morphological studies, this is the largest Asian tortoise species. Manouria emys contains two subspecies, Manouria emys emys and Manouria emys phayrei: which is slightly larger. M.e. phayrei can reach up to 25 kg in the wild and larger in captivity. M. e. emys has separated pectoral scutes while M. e. phayrei has joined pectoral scutes. The carapace (top shell) is broad, flattened, and can reach over 60 cm in length. These tortoises have a cluster of noticeably large tubercular scales on the thigh on either side of the tail, which is so large this species is sometimes referred to as the six-footed tortoise. The carapace is light to dark brown and the plastron (lower shell) is generally pale brown with some dark spots. In juveniles, the carapace is yellowish brown with dark brown markings. Tortoises are dark brown or black with some yellow under the chin.

The Asian tortoise is chiefly herbivorous, typically feeding on grasses, vegetables, leaves, seedlings, herbs, fruits and fungi, although carrion, invertebrates, and amphibians have occasionally been recorded in the diet.

Mating begins with head bobbing and vocalizations by both sexes. This species is the only tortoise species to lay eggs in a nest above ground. The females construct nest mounds made of leaf litter, earth and debris by ‘backsweeping’ the materials with her forelimbs. The female then rearranges the mound to create a nest cavity for her eggs by moving some material away. A female can lay up to 50 eggs, which is unusually high for tortoises. The female covers her eggs and then remains by the nest for 3-20 days. During this time, she will protect her nest by sitting on top of it when potential predators, including humans, come close and will attempt to push, bite, or chase the intruders away if they come closer. She will rearrange the leaves and debris materials and add to the mound. The eggs are spherical and rubbery, approximately 400 mm in diameter, and weigh four to five g. The relatively short incubation period lasts about 70 days.

It is thought that since this tortoise species’ clutch size is relatively large among tortoises and females do not nest every year, the female remains at the nest to protect her high investment. This behaviour also helps to protect the nest by confusing predators and distracting them from the smell of the freshly laid eggs. After a few rainy days, the nest mound will look and smell like any other leaf litter pile in the forest. It is also speculated that the nest attending behaviour is meant to regulate egg incubation temperature. By readjusting and rearranging the layers on top of the eggs, the female attempts to keep her eggs from overheating or overcooling. It may also serve to disguise the smell of the nest, which attracts predators. Although not a particularly social animal, the Asian tortoise seems to have more complex vocalizations and other communication methods than other tortoises. Males engage in vocal disputes and aggressive behaviour to discourage rivals from courting nearby females. They are crepuscular (primarily active at dawn and dusk).

Heavy exploitation by humans for food and the pet trade. Their size makes them an easy target for hunters. Deforestation has diminished their habitats.