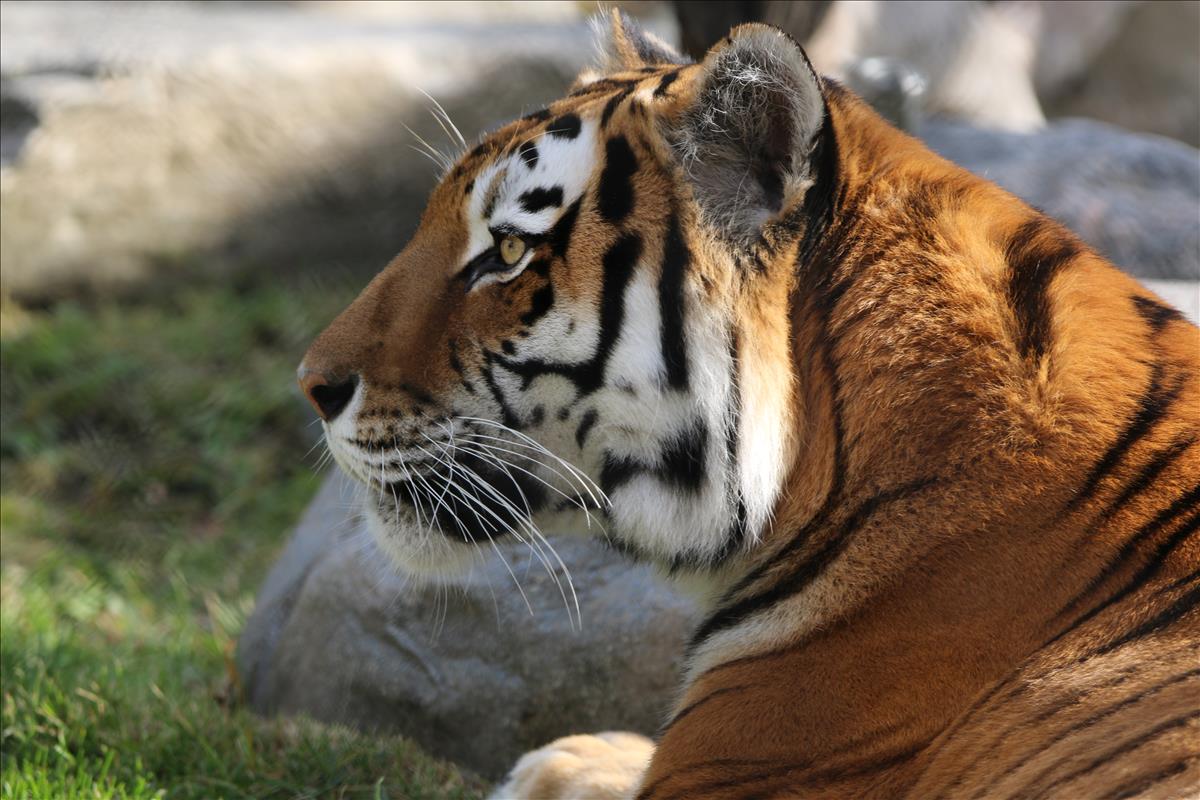 The Amur, or Siberian, tiger is the world's largest cat species. It is a massively built animal with a rounded head, muscular body, and powerful limbs, especially the forearm and shoulder, which enables it to overpower prey larger than itself. The tail is usually slightly shorter than half the head and body length. Ears are small and rounded. Older males have massive forequarters and huge heads. The muzzle is relatively broader than in other tiger species, and they have large canine teeth. The summer coat is fairly short and smooth and tawny gold in colour. The winter coat is very full and long and a more pale yellowish colour. The stripes are brown and less numerous than in other tiger species.

The name 'Siberian' tiger came about because this subspecies was originally found across much of Siberia. Its territory is now so reduced that this tiger is almost entirely restricted to a small area in eastern Russia. A few are left in the Mount Changbai area of northeast China and in the extreme northern regions of North Korea. Due to the fact that the Amur River runs directly through their Russian habitat the common name of the Siberian tiger has changed to reflect their modern-day status and this subspecies is now usually referred to as the Amur tiger.

Reeds and bushes in river valleys, mountain taiga and mixed forests traversed by rivers with rock outcroppings. In summer they live at altitudes of up to 1200 m; in winter they move to lower altitudes.

The Amur tiger's diet consists of deer, wild pig and occasionally fish. If its chief prey is lacking, it feeds on carrion and catches birds, small mammals, turtles, and insects. In summer they also eat grass, cedar nuts, fruits, and berries.

Tigers are solitary and only come together to mate. There is no particular mating season; they mate at any time of the year. A female tiger signals she is in estrus through behaviour, scent, and sound. She lets the males know that she is ready to mate by making certain roars and leaving specific sent markings around her territory, including urine deposits and scratch marks on trees. She will spend five or six days with the male, during which she is receptive for three days.

After a gestation period of three to three and a half months, a litter of two to four kittens are born in a well protected den. This may be located in a natural cave, rocky crevice, or in dense vegetation. The kittens are born blind and will open their eyes at about two weeks. Newborns weigh 780 - 1600 g. The female tiger feeds the cubs until they reach five to six months of age. At this time they are able to go with her on hunting trips. At one year of age, the cubs are able to hunt for themselves. The cubs continue to stay with their mother until they are three to five years old and then they will leave to find their own territories and mates. Sexual maturity is attained in the fourth year.

Tigers are mostly nocturnal, but in the northern regions they are also active during the day. They are cryptically coloured for the habitat. The black lines serve to break up their body shape in tall grasslands. They are seldom found far from rivers or other water sources. They swim well and enjoy launching into the water on hot days.

Tigers are well equipped for hunting. They are extremely flexible. This flexibility is due to the fact that the bones are attached to the muscles and tendons without strong ligaments. Their keen eyesight picks up even the slightest movement. The tiger's large, cup-shaped ears focus sounds, making its hearing very sensitive. A tiger's long, stiff whiskers are used as feelers to help it maneuver through twigs and branches in the dark. The tiger's sense of smell is also excellent.

Amur tigers have long sharp retractable claws for catching and holding prey. The claws are pulled into a protective sheath to prevent them from becoming worn down while walking on rocks or hard ground, keeping them very sharp. Characterized by extreme strength, agility and endurance, they move noiselessly making daily marches of up to 80 km.

The tiger stalks its prey, sneaks up from behind or from the side, then attacks in several large leaps of five to seven metres and two metres high, trying to simultaneously throw it down and grab its throat. Killing is by strangulation or a bite to the back of the neck. The carcass is often dragged to an area with cover or near water to hide it from other predators. The Amur tiger needs to eat at least 9 - 10 kg of meat a day to survive the cold climate of its environment. The tiger can eat up to 45 kg of meat at one meal. Only one hunt out of 10 is successful. When food is available and the tiger remains unmolested, it stays in its selected region. It marks and patrols its territory and avoids fights. Normal range is 400 - 500 square km
.
The male and female tigers are generally solitary animals. They both have their own hunting territories, and they both mark their territories by spraying their urine and scratching trees. The female will not defend her territory, but the male is an aggressive defender. However, male tigers are willing to share their territory with females, but will not tolerate other males. Tigers are not unsociable animals. Adult tigers may come together briefly to share a kill.

Tigers roar to announce a kill and to attract the opposite sex. Vocal calls of tigers include startled ‘woofs”, roars during mating, rasping grunts by tigress to call young, purring, and soft grunts of puffing sounds.

Pressures from illegal killing or poaching, and habitat loss. Tiger body parts are in high demand in all of Asia for fur and medicines, putting the Amur tiger in serious danger of extinction.