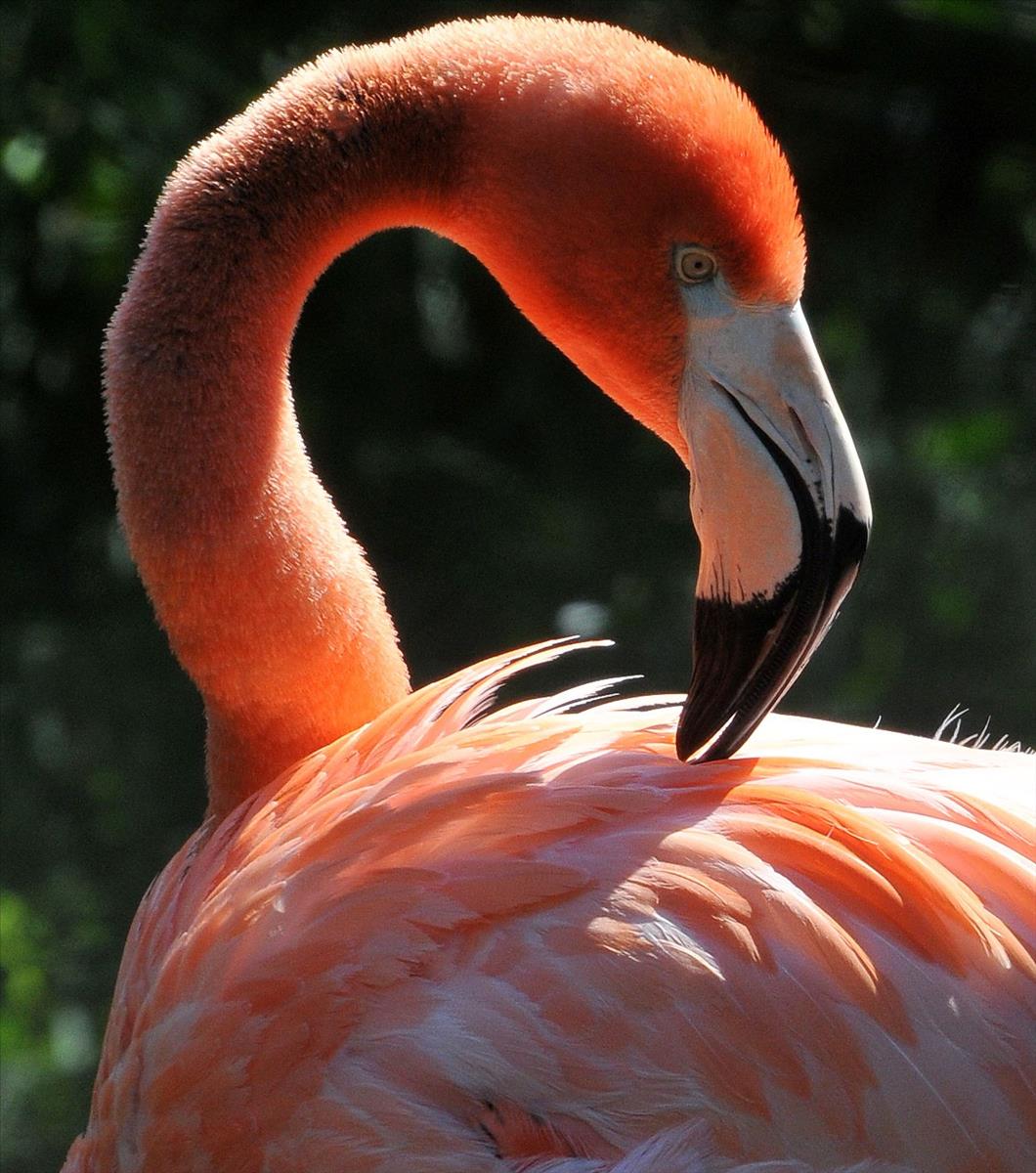 These flamingos have the brightest plumage of all the flamingo species - they are deep pink in colour. They can be bright orange/red. The intensity in colour is determined by the amount of pigment in their food, this varies with location being dependant on what they eat. They are paler below, and when the wings are spread out they show off their black under feathers. As young birds they are whitish grey with black bills but their plumage slowly turns pink as they mature. They have very distinctive heads atop long flexible necks. The bill is pink with a black tip which is bent. All flamingos have orange eyes. They have long, pink legs with their knees being a slightly darker pink, and webbed feet. The ankles on the flamingo’s legs are half way up the leg, and the knees are hidden by feathers. Neck and legs are longer, relative to body size, than any other bird. Males are slightly larger than females.

The Atlantic coast of subtropical and tropical America, locally Bahamas, Cuba, Hispaniola, Yucatan and Guiana. The American flamingo is also referred to as the Caribbean flamingo; it is the only species of this bird found in North America.

Brackish water of salt lakes and lagoons, but can also be found in mountain areas and flat lands, depending where in the world they are living.

Chiefly blue-green algae, crustaceans, mollusks and will sometimes eat water plants for their high nutrient levels. They mainly eat from shallow waters, stomping their feet in the water to rise up their food.

These birds require large colonies for the breeding process to occur and the breeding season varies amongst different populations. Rainfall helps to trigger this activity. Only fully coloured adults breed at approximately three years of age or more. Both sexes attract mates with elaborate displays. These displays synchronize breeding within the colony. Once paired, they remain monogamous for the season and may remain so over several seasons. After mating the bonded pair build a conical mud nest. Nests are usually made of mud which is raked up by the bird with its bill into the form of a truncated cone from 15 to 30 cm high, with a shallow depression on top very near other nesting birds. They are built in shallow water or on open expanses of wet mud, but occasionally it builds on the dry mud flats or even on small, rocky islands on lagoons. In this case, the nest may consist of only a small mound of grasses and gravel or a depression surrounded by a low parapet of clay pellets formed by the birds. Frequently old nests are re-used.

Normally, one egg is laid, rarely two. Flamingos will mate only in times of plentiful food, and water. If there is plenty of food mating can occur more than once a year, but in times of drought or lack of food mating will not occur that year. Incubation is shared by the male and female and lasts 30 to 32 days. Until its bill has developed the characteristic shape, a young flamingo is unable to feed itself and relies on its parents. The downy gray chick is fed regurgitated crop milk, which is produced in the crops of both sexes. To feed a chick, a parent stands behind it and lowers its neck so the chick may take the tip of the parent’s bill into its own. The adult regurgitates liquified food which runs down the chick's throat. The chick leaves the nest after about four days and follows the parent. Parents are able to recognize their own chicks even when they are amongst a dense crowd of other chicks. These crowds are always accompanied by adults. Fledging occurs at about 78 days and the chick attains its full adult plumage at three or four years of age.

These birds are very gregarious. Smaller nesting colonies may contain fifty or so birds, larger ones can contain thousands. They are very social and interactive. A behaviour, such as preening may influence an entire colony, (if one flamingo is performing this activity the whole colony will follow along). The entire colony will assist in the raising of the young, and teach them how to swim and feed. They have several vocalizations similar to those of geese.
Flamingos extract their food from the water by a filtering mechanism, very much like that used by baleen whales. They wade through the water with necks lowered and heads turned upside down, sweeping from side to side. The upper and lower portions of the bill are fringed with bristles which trap particles as the flamingo sucks in water. The outer layer of coarse bristles keeps out large particles, while minute algae such as diatoms are collected on an array of bristles inside the bill. The upper and lower portions of the bill fit tightly together. The tongue fits into deep groove in the lower bill and acts as a piston to pump water in and out. While eating, the tongue moves up and down close to one hundred times a minute. The tongue’s movements are a key component for the digestive system. The bent bill facilitates this feeding process.

The bright colour of the feathers, legs, and beak comes from carotenoids that are metabolized into several different byproducts (pigments) and deposited, through the blood, to different parts of the body. These come from the food these birds ingest.

They live close to water with a very high salt content, which also means they have few natural predators being able to survive in the same areas. Long legs allow the bird to wade into deep water. The webbed feet help them to balance. They will frequently stand on one leg, tucking the other close to the body.

The main threat to them is the disturbance of breeding colonies, especially by habitat destruction. Tropical storms and hurricanes can be lethal to coastal dwelling flamingos, and may alter the habitat by flooding, reducing salinity, and reducing food resources. Predators include raccoons, jaguars, margays and birds of prey.