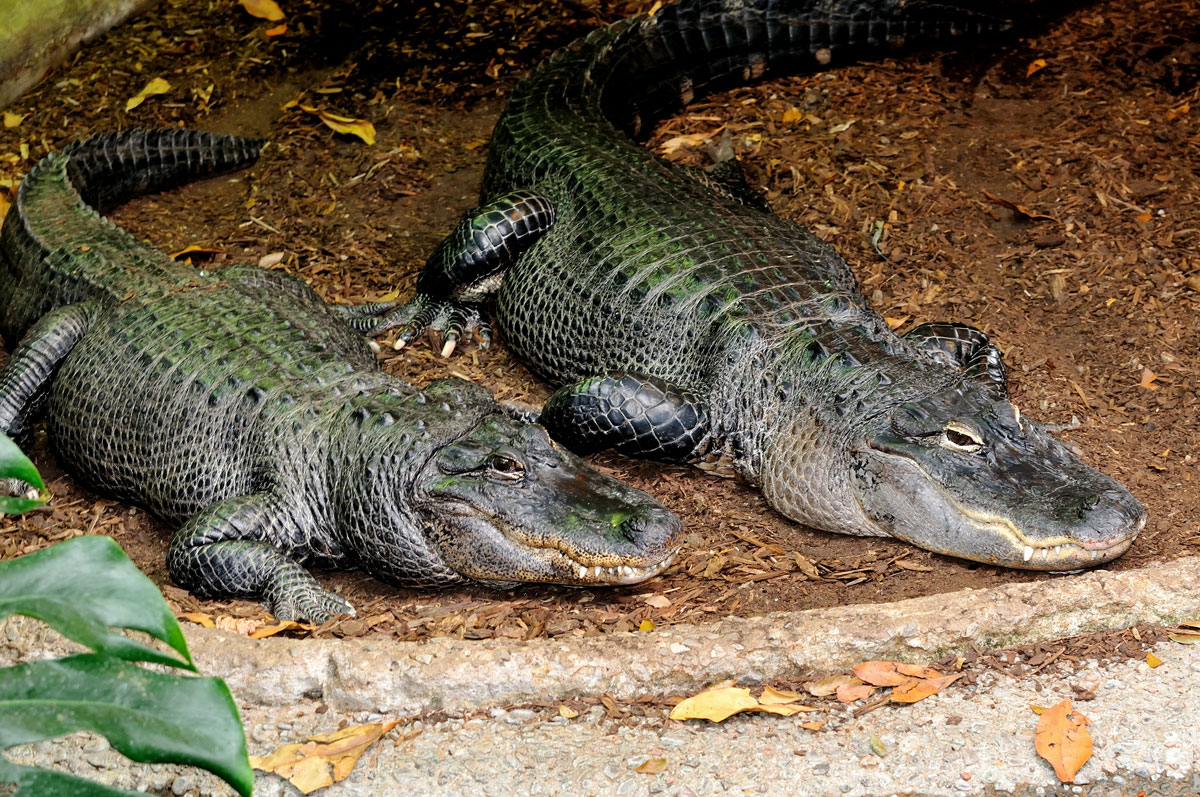 The America alligator is a large reptile; lizard-like in appearance, with a powerful, triangular-shaped head, broad at the shoulders, tapering towards a blunted snout on top of which lies a pair of nostrils. Further up and also on top are a pair of large, imposing, slightly bulging eyes, lidded top and bottom, olive green in colour but variable. Vertical ear slits, covered by an external flap of skin, lie directly behind the eyes. The massive jaws extend the length of the head with only the lower one moveable. When the mouth is closed, the effect is that of a gentle smile. When opened, the jaws reveal a single row of irregular, conically-shaped teeth, both top and bottom about 80 in number, as well as a pit in each upper jaw meant to receive the long 4th lower tooth when the mouth is closed. All teeth are situated in deep hollows in the jaw (alveoli).

The back and sides are covered with square, tile-like, scales, each with a bone and covered with skin (osteoderms). All scales are linked together by flexible, tough, tissue, except on the head where they are ossified and solidly fused to the skull. The scales on the belly and throat do not have osteoderms, they are smooth and softer than those above and are creamy white, darkening towards the long tail that is flattened vertically and narrows towards the tip.

The American alligator is found in the south eastern United States in an area bounded by the Texas-Mexican border on the west, eastward to the Atlantic coast with heavy concentrations along the Gulf Coast throughout the states of Alabama, Louisiana, southern Georgia and Florida, then northward to southern Virginia and the coastal lowlands of North and South Carolina; finally, westward to a sparse population in southern Arkansas.

These alligators are found in and near bodies of still or slow moving fresh water. They are common in coastal swamps, rivers, bayous, marshes, man-made ponds, and waterways. They will tolerate brackish conditions and mangrove swamps for short periods of time.

American alligators become sexually mature at approximately ten years of age, males slightly earlier than females. Courting and mating rituals occur annually in the spring, although earlier in the southern parts of their range. Changes in light intensity, an increase in humidity, air and water temperatures, along with a rise in water levels all combine to trigger spring activity after winter dormancy.

Stentorian roars from the bulls and answering bellows from the females announce that courtship is underway. This process is a complex one involving auditory, visual and olfactory cues. Sometimes travelling over long distances, males will declare their presence to both rivals and females alike. They will try to intimidate the competition by bellowing, charging, snout sparring and displaying their strength often pushing other males under the water. Bulls initiate chorus bellowing, picked up by the females, to separate out rivals and identify mates. This declarative behaviour intensifies during courtship. Head slapping and jaw dropping onto the water, tail wagging and arching, along with body inflating are also forms of attention getting. As well, male alligators can send out throaty vibrations through the water, inaudible to humans, but are made visible through ripples and dancing water drops on the surface around the bull's inert body. These behaviours are often followed by a musky odour produced by glands near the throat and at the base of the tail.
After the female chooses her partner, mating begins in twilight and darkness. Coupling is a slow and quiet affair including body stroking, blowing bubbles and vocalizing. This behaviour gradually intensifies as acquiescence nears. The male is polygamous; the female will not usually partner again that season.
Females search out nest locations high on muddy banks with an abundance of aquatic plants at hand, often on sites she or others have used before. The female then begins tearing up vegetation mixed with mud to form a large mound nest approximately two metres across by four metres high to avoid being flooded out. With this foundation complete, she climbs on top and scrapes out a depression using her hind limbs. A second depression is them hollowed out within the first and it is into this second cavity that she lays some 25-60 white, hard-shelled, porous eggs. The mother then seals them in and shapes the whole thing into a cone.

The nest is supervised but not disturbed allowing the heat and moisture of decomposition to instigate incubation. It is temperature that determines the sex of the young during the first two or three weeks: 31-34 °C degrees produce males, 26-30 °C for females, and 26-31 °C for both.

In a little over two months the hatchlings begin to break out of their shells using an egg tooth, a horny protuberance on the tip of the snout (caruncle) and begin their high- pitched grunting or chuffing. The female responds and begins scraping open the nest with her limbs. Hatchlings orient towards her snout and the mother delicately allows her off-spring to enter her mouth a few at a time where they are held between her teeth or pillowed on her tongue for the short migration to the water. By slowly moving her head from side to side the female lets her young slip into the shallows. They stay with their mother from one to three years. Total life expectancy can easily exceed 50 years.

American alligators are well suited to their life on land and in the water. They are stealth predators, often floating awash in the water, their tough, irregular, knobbed covering with its greyish black colouration, ideal camouflage, easily mistaken for a fallen log or a clump of vegetation. Smooth belly scales allow easy and secretive entry into the water. Their body armour is designed for this reptile's life style including competitive courtship, the killing of prey, thermoregulation, nest building, and the making of gator holes and burrows.

The triangular head allows it to move easily and quickly through the water, particularly when hunting. The high-set nostrils and prominent eyes allow for breathing and seeing while otherwise awash; hence this reptile's preference for smooth, quiet water. The ear openings are closable and the lungs are also protected while the alligator is submerged by a structure far back on the palate which can close off the windpipe. Subsurface vision is enhanced by a nictitating membrane; they are well adapted for night hunting.

The elongated, muscular jaws can lock onto live prey and they are aided in this by the pointed teeth which can tear and rip food. These reptiles do not chew and any teeth ripped out can be easily replaced because they are without roots.

The partially webbed and splayed configuration of the toes and fingers help keep the alligator from miring in oozy banks and bottoms. Their claws are effective in holding onto prey, building nests and creating burrows and gator holes.

The large tail is their only source of locomotion. It is vertically flattened to give oar-like capabilities.

The young are also well adapted to their environment. Their earliest vocalizations begin a bond between mother and child which aids in their survival. They hone in on her snout to begin the safe passage to the water. The shallows with their interplay of light and shadow are a perfect back drop for the hatchlings colouration (cryptic colouration). Their instinct to form nursery groups or pods allows for safety in numbers, where no individual stands out (disruptive colouration). A chorus of alarm chirps carries much more clearly to a guardian female than just one. Riding on mother's back is not only a chance to rest but also a method of keeping clear of underwater predators.

Alligators rely on their environment for warmth (exothermism). Since they spend a lot of time in the water, particularly at night, raising their temperature through morning basking is a necessary activity on sunny shorelines where crowding is tolerated and space is allocated by size and dominance. Warming up leads to cooling off and alligators will seek out shady areas or lie half submerged during the afternoons often with their mouths open for additional radiation.

At the onset of the winter's drier months, when water levels drop and temperatures cool, these reptiles use their powerful bodies to push and scrape wetland muck aside to create and maintain gator holes. These excavations, sometimes 1200m long ponds act as collecting basins for water where alligators can lie half submerged and dormant for several weeks at a time. Burrows, too, are often carved into banks where alligators can lie protected while in a state of torpor. Sometimes they are accompanied by their young
Furthermore, gator holes are integral to the wetland ecosystem. They create a habitat for a wide range of fish, wading birds, waterfowl, mammals, amphibians, reptiles and invertebrates all of whom are attracted to water. These reptiles, then, are the basis for an entire food web. As top predators, alligators maintain balance and biodiversity. Grasses, flowers, scrubs and trees are nourished by the peat thrown up at the gator pond and nest sites. Alligators provide conditions for supplying food and protection for everyone. For example, red breasted turtles lay their eggs in alligator nests without harm.

Alligators are the supportive arch that sustains this ecosystem and are called a "keystone species".

Habitat degradation is a major threat to the long term future of this species. Although the US government has legislated protection against meaningless hunting, human activity continues to have a deleterious effect on alligator habitat. Their encroachment upon the wild places of the alligator's range continues. Contamination of air, land, and water from industrial pollution is a major hazard. Mercury, in particular, interferes with male potency, as well as the production of viable eggs. Wetlands are being drained for housing developments and the resultant lowering of water levels and desiccation of habitat deprives the alligator of opportunities to thermoregulate and instigate courting.

As well, plants and animals that have evolved as wetland species cannot easily flourish. These continuing long term threats cast a shadow over the future of the American alligator and an entire ecosystem.