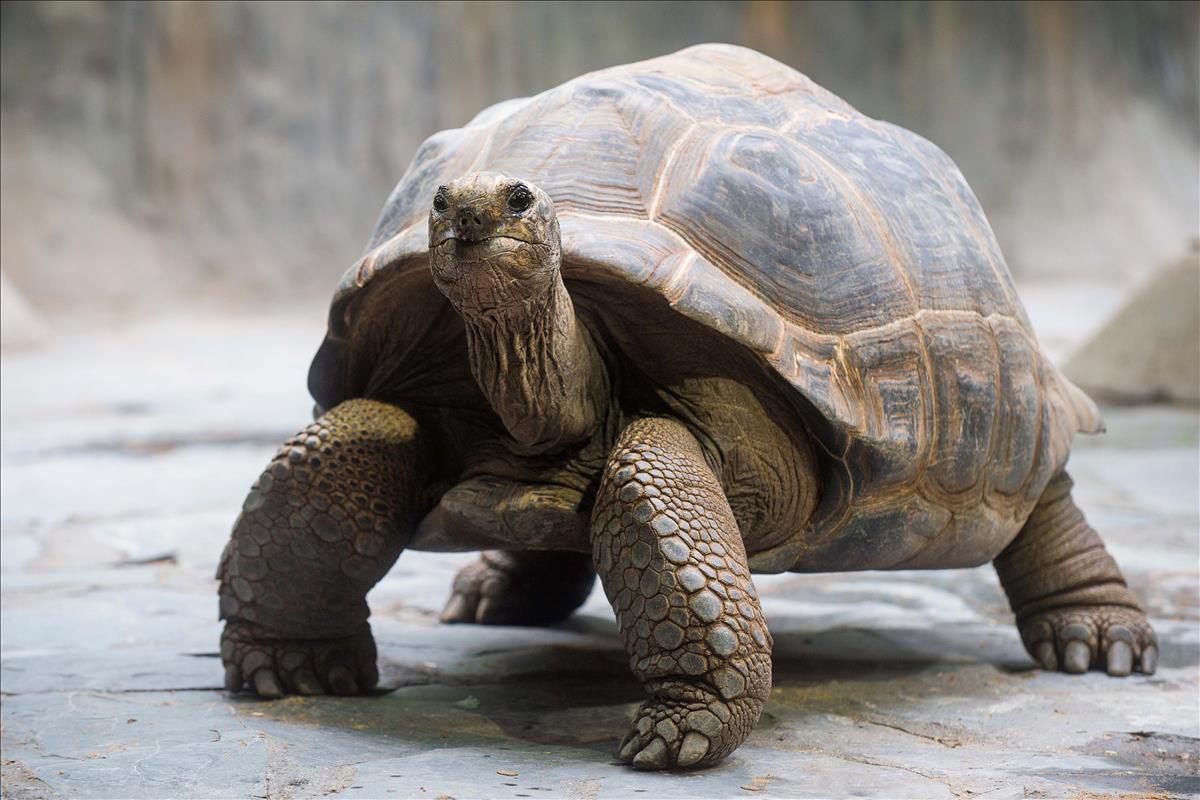 Aldabra tortoises are one of the largest species of tortoise in the world. Males are considerably larger than females and have longer, thicker tails. The male's carapace (upper shell) can measure 4 feet (1.22 meters) in length and they can weigh up to 550 pounds (250 kilograms). The female's carapace can measure 3 feet (91 centimeters) in length and can weigh 350 pounds (159 kilograms). They are dark gray to black in color with a high domed shaped carapace. They have long necks, which helps with gathering food up to a meter from the ground. Aldabra tortoises have stocky, heavily scaled legs to support their heavy body. The hind legs are cylindrical and columnar like those of an elephant. The toes are short and two-jointed. The head is relatively small, pointed and covered by scales.

Aldabra tortoises are found only on the island they are named after, the Aldabra Atoll. This is part of a group of islands of the Seychelles archipelago northeast of Madagascar in the Indian Ocean. The coral atoll of Aldabra is a UNESCO World Heritage site and is now protected.

They can be found in scrub, mangrove swamp and coastal dune habitats, but the largest concentration of tortoises is found in the grassland areas called platins.

Aldabra tortoises eat grasses, leaves, and woody plant stems. They occasionally eat small invertebrates and will eat meat when it is available, even eating the carcasses of dead tortoises. They obtain most of their moisture from the food they eat because there is little freshwater available for drinking in their natural habitat. Aldabra tortoises are able to go without food or water for long periods of time.

The breeding season runs from February to May. During courtship the male batters his shell against the female a dozen or more times. The male makes a deep, trumpeting call when mating. Females lay between 9 and 25 eggs the size of tennis balls in a shallow, dry nest. Usually, less than half of the eggs are fertile and only three to five viable young are produced from a clutch. The eggs hatch between October and December. Females may nest twice in one season.

They use their long necks to reach low leaves on high branches and have even been known to rise up on their hind legs for extra height. Their strong, stocky legs and clawed feet are used like shovels for digging. As the largest animal in this habitat, these giant grazers fill the same role as elephants do on the savanna. Aldabra tortoises have been known to knock over trees and shrubs, make pathways and clearings within the forest, and pass seeds through their digestive tract which eventually sprout into plants to feed other animals.
Aldabra tortoises can live for more than 100 years. An Aldabra tortoise named Adwaitya, who lived at the Alipore Zoological Gardens of Kolkata, India, is said to have reached the age of 255 years (c. 1750 – 22 March 2006).

Aldabra Atoll is very remote and difficult to access. It is for this reason that giant tortoises have survived here. Early European explores discovered that tortoises could live for months without food and water in the hold of a ship, and could be used as a source of fresh meat for sailors who would be at sea for months at a time. Ships would often stop at islands to take on as many tortoises as they could capture. Ships also brought in settlers and new species such as rats, cats, pigs and goats. These combined threats, similar to the fate of the Dodo, led to the extinction of these majestic tortoises from all the other Indian Ocean islands on which they were found. Historically threats included predators such as rats and cats and competition for food from introduced goats. Climate change effects over the coming years are expected to have severe impact on coastal habitats such as Aldabra Atoll. It is expected that rising sea levels and increased frequency and severity of drought will likely result in significant declines in the wild Aldabra tortoise population.