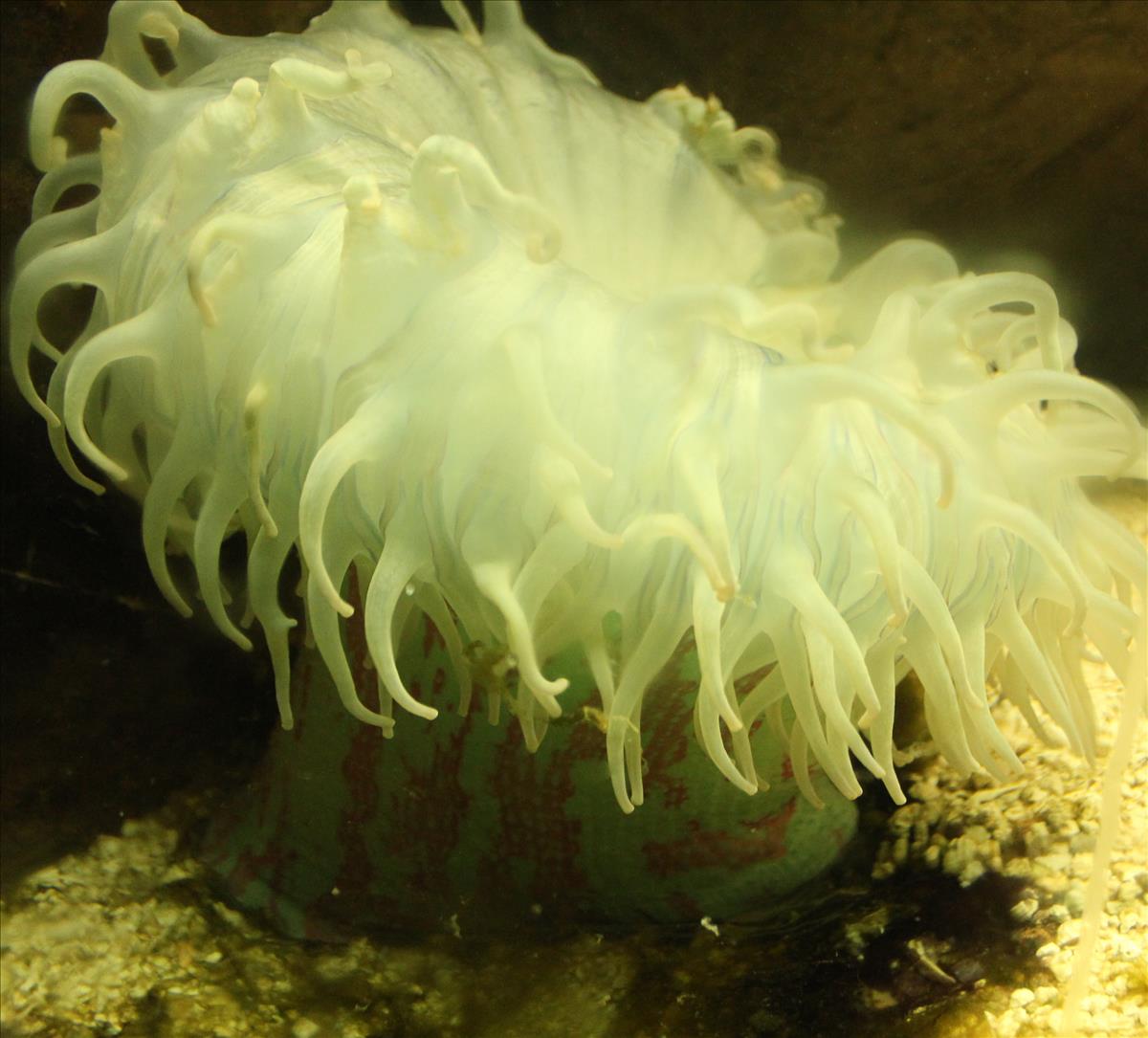 Aggregate anemones rarely exceed an expanded diameter of 7 cm. They have a stout muscular body, most of which is composed of a heavy, greenish-coloured column. The column is expanded at its upper end into an oral disk composed of a central mouth surrounded by several circlets of hollow, pink/purple tentacles. The colours-while distinct-are of a subdued nature. The basal end of the column forms a smooth slimy and very strong pedal disk that acts like a suction foot, allowing the anemone to slide about very slowly and/or cling to surfaces.

Anemones are solitary polyps that lack a skeleton. They are classified by the number and arrangement of tentacles that surround the mouth.

It inhabits the upper parts of the middle inter-tidal zone (the tidal area submerged and flooded for approximately equal periods of time per tide cycle) and tidal pools, where sand and shell accumulates. Frequently, the bases of the anemones are buried in the sand. They will form a dense mat that often covers large areas of rock (colonies can be especially abundant on steep rock slopes facing the sea), pier pilings, beaches, etc. When the tide is out, each anemone folds in on itself, forming a flat spheroid. Since the surface of each individual anemone’s column becomes covered with bits of gravel and shell, these colonies closely resemble the rock they are living on. Aggregate anemone colonies readily grow over many other organisms that are attached to the same surface.

Anemones are carnivores. They eat small fish and other marine fauna, such snails, and crabs. Occasionally they will eat plankton and algae.

While both males and females do exist, aggregating anemones most often reproduce by cloning. One anemone will separate itself into two "daughters". In their turn, these "daughters" will repeat the process of splitting themselves, thus forming 4 individuals from the original animal. This process repeats itself over and over again, and it ultimately creates colonies that are genetically identical. Such a rapid reproduction strategy allows aggregating anemones to quickly form extensive colonies that will carpet large areas.

Stinging Cells: The tentacles surrounding the mouth are covered with millions of cells called cnidocytes. Cnidocytes that sting are called nematocysts. Each nematocyst contains a small vesicle filled with toxins, an inner filament and an external sensory hair. When the hair is touched, it mechanically triggers a cell explosion, and a harpoon-like structure erupts and attaches itself to the organism that triggered it, injecting a dose of poison in the flesh of the aggressor or prey. Disabled, the prey is then swept into the anemone’s mouth where it is consumed.

Anatomy: Anemones have only one opening to and from their digestive tracts, which functions both as mouth and anus. In an anemone’s gullet, downward-pushing, hair-like cells called ‘flagella’ act to force food and oxygenated water into the gastrovascular cavity for consumption. Similarly, upwards-pushing flagella force carbon dioxide and other waste products out.
Territorial Defence: Clones in a colony that are within reach of the nematocysts of anemones belonging to an opposing colony will be attacked and stung by the members of that colony. For this reason a space will develop between colonies: a ‘no anemone allowed’ neutral zone.

Environmental Adaptations: When the tide ebbs, the anemones deflate. Living in the temperate tidal pools helps them withstand the heat of summer as well as the icy waters of winter. Shards of shell and bits of gravel adhere to the anemones’ surfaces, which not only provide camouflage, but also help them reflect sunlight and retain moisture when exposed at low tides. As well, they are hardy and well anchored by their suction feet, factors that allow them to live in areas of crashing surf.

Symbiotic Relationships: The anemone’s colours are derived from two distinct sources. One source is from pigment created by the anemones themselves. The other source comes from algae (two different species, one green in colour, and the other olive). A mutual symbiotic relationship (one in which two or more organisms live in close relationship that benefits both species), has developed between the anemone and the algae. Anemones receive supplemental amounts of nutrients and oxygen from the algae as by-products of photosynthesis. In turn, the algae exist in stable structures (anemones’ bodies) that supply products required for photosynthesis, such as carbon, nutrients and (when the anemones are not submerged) a direct source of sunlight.

Anemones share yet another mutual symbiotic relationship, this one with the clown fish. An anemone’s tentacles are coated with mucous which enables it to recognize them as part of its own body and thus prevents the anemone from attacking itself. There are some species of fish, most notably the clown fish that are coated with the same mucous, and this enables them to live among anemone tentacles. These fish aide in keeping the mouth of the anemone clean, as well as ridding it of necrotic (dead) tissue. In its turn, living within the tentacles of the anemone protects the clown fish from larger predators.

Note: The clown fish is a tropical fish. This specific relationship therefore applies to tropical anemones. Anthropleura elegantissma is not a tropical species.