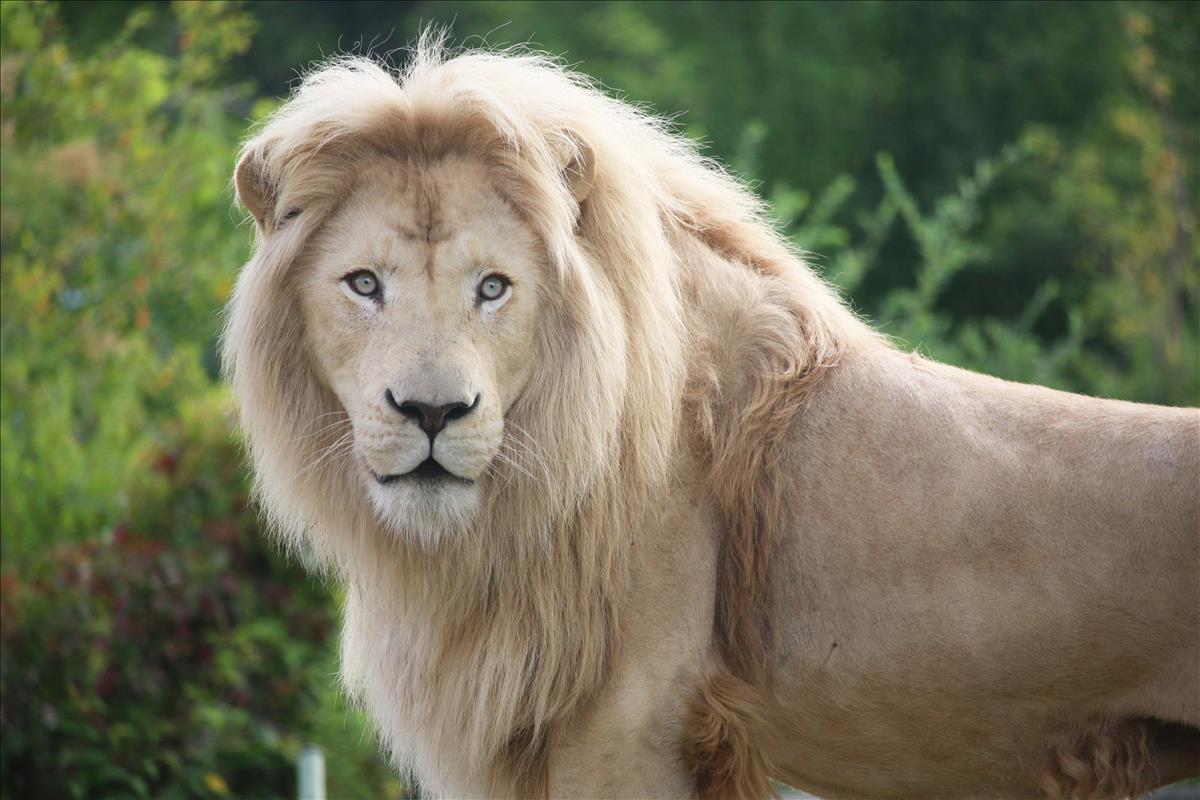 The lion is powerfully built, with a broad head, thick, strong legs and a tail tipped with a tuft of black hair. The body is very muscular with less bone mass than any other animal of comparable size. Both sexes have large amber eyes, their eyes being the biggest of any meat-eating animal. Lion coloration in general varies from light buff to yellowish, reddish, or dark ochraceous brown. The underparts are generally lighter and the tail tuft is black. Lion cubs are born with brown rosettes (spots) on their body, rather like those of a leopard. Although these fade as lions reach adulthood, faint spots often may still be seen on the legs and underparts, particularly on females.

Male and female lions are sexually dimorphic; they differ in size and appearance. Female lions are smaller than males and have a uniformly coloured coat of a tawny brown color. Females lack a mane. Males have a thick, woolly mane of fur that frames their face and covers their neck. It varies in colour from light yellow to black. Body colour also varies from tawny-yellow to reddish-brown.

Africa, south of the Sahara

African lions predominantly prey upon large herd animals such as wildebeests, antelope and zebras. They will eat smaller animals like hares and tortoises. However, if prey is really scarce, lions will eat almost anything that they can find - including snakes, insects and fruit. They also scavenge, or
eat animals that they themselves haven’t killed.

Breeding occurs at any time of the year and a pair of lions can mate up to 40 times in a day. In any one pride, females tend to give birth at the same time. A litter of one to six, usually two or three, is born after a gestation period of 100-119 days. A female normally gives birth every 18 - 26 months, but if an entire litter is lost, she may mate again within a few days. A heavily pregnant female will leave the pride when birth is imminent and find a suitable place to give birth. The site must be free of drafts, with protection from the sun and rain and well hidden from enemies.

The mother lion keeps her cubs by themselves for the first few weeks, but then introduces them to the pride. The newborns weigh about 1,300 grams each, are 30 cm in length and their coats are spotted. Their eyes open at two weeks and the milk teeth appear at three weeks after birth. Cubs are suckled for about six months from any lactating female in the pride. From three months onwards, an increasing proportion of their food is meat. Once they are four months old the cubs follow their mother everywhere. Cubs begin to participate in kills at 11 months and are fully dependent on the adults for food until 16 months. Sexual maturity is attained at two to three years. Growth continues until the age of six. Lions live up to 15 years in the wild and 25 years in captivity.

Lions have excellent sense of sight. Like the eyes of other cats, lion’s eyes are specially designed for seeing at night. Their sense of smell is well developed. Lions mark their territories by means of scent deposits, necessitating a good sense of smell. This also helps them to find kills made by other predators. Lions and all cats possess a special olfactory organ on the roof of the mouth called the Jacobson’s organ. A lion (or even your cat) may be seen grimacing when smelling something. They are opening their lips to draw air over their Jacobson’s organs. This grimacing gesture is called Flehmen.

Lions also have very good hearing. Lions can turn their ears from side to side to catch sounds coming from almost any direction. They can hear prey that is more than a mile away. The colour of the lion’s coat camouflages it well with their surroundings, helping the lion get close to their prey without being seen. Lions have strong muscles in their chests and front legs which enables them to knock and hold down large animals. Powerful muscles and strong tendons in the rear legs provide tremendous leaping abilities. Lions normally walk at a pace of four km/h and can run for a short distance at 50 - 60 km/h.

Leaps up to 12 metres vertically and 11 metres horizontally have been reported. Lions readily enter trees by jumping, but are not adept climbers. Each paw is equipped with soft rubbery pads to make its movements quiet and help them to sneak up on prey. The claws are retractable and very sharp. The retractable feature helps keep the claws sharp and prevent injury during play, etc.

The tail of a lion is used for balance as well as a means to signal to each other during a group hunt. The females use their tail as a “follow-me” signal for the cubs. The mane of the male lion makes him appear larger than he really is. This mane also gives him protection during battles with other male lions or predators. The mane is not fully grown until five years of age.

Lions are social animals and live in a family structure called a pride. A pride of lions consists of 4 - 20 related females and their young, and usually two to four adult males. These males may succeed in holding a pride for several years. Once the cubs reach sexual maturity, the young males are driven out of the pride, while the females remain with their family. The males cooperatively defend the pride against the approach of outside males. Single males, called nomadic males, often live on their own for many years. Frequently, two or more males, often brothers, will form an association, and hunt together. Males who wish to take over a pride will challenge the male(s) in control.

Lions may be active at any hour, but they are mainly nocturnal and crepuscular – hunting at dusk and dawn. The lion usually hunts by a slow stalk, alternately creeping and freezing, using every available bit of cover. When close enough, the lion then makes a final rush and leaps upon the prey. If the prey cannot be caught in a chase of 50 - 100 metres, the lion usually tires and gives up. Small prey may be killed by a swipe of the paw while larger animals are seized by the throat and strangled or suffocated. Two lions sometimes approach prey from opposite directions - if one misses then the other tries to capture it. Also, an entire pride may fan out and then close in on the quarry from all sides. Lions often work together when they hunt as this cooperation increases their chances of getting food. In a pride of lions, the females do almost all the hunting. After a successful hunt, the males of the pride eat first, then the females, and lastly, the cubs.

A lion has 30 teeth. Four large pointed teeth (canines) are used to hold its prey, kill it and tear it apart. Four cheek teeth called carnassial teeth are for cutting through tough skin and tendons. Lions have no teeth suitable for chewing, thus they will swallow their food in chunks. The lion eats anything it can catch and kill, but it depends mostly on animals weighing 50 - 300 kg. Up to 40 kg of meat can be consumed by an adult male at one meal. Lions are also expert scavengers and obtain as much as 40% of their food by stealing it from other predators, or finding already dead animals. For many old males, too old to catch live game, scavenging may be their only way to find food. The average period of inactivity is 20-21 hours per day.
The lion has at least nine distinct vocalizations, including a series of grunts that serve to maintain contact as a pride moves about. The roar can be heard up to nine km away and is usually given shortly after sundown for about an hour, and then again following a kill and after eating. This has a territorial function. The lion also proclaims its territory by scent marking through urination, defecation, and rubbing its head on bushes.

Lions are losing their habitat due to the expansion of human activity (primarily agriculture) and human settlement. Lions are also hunted for sport and persecuted as a predator where they come into conflict with domestic cattle herds.