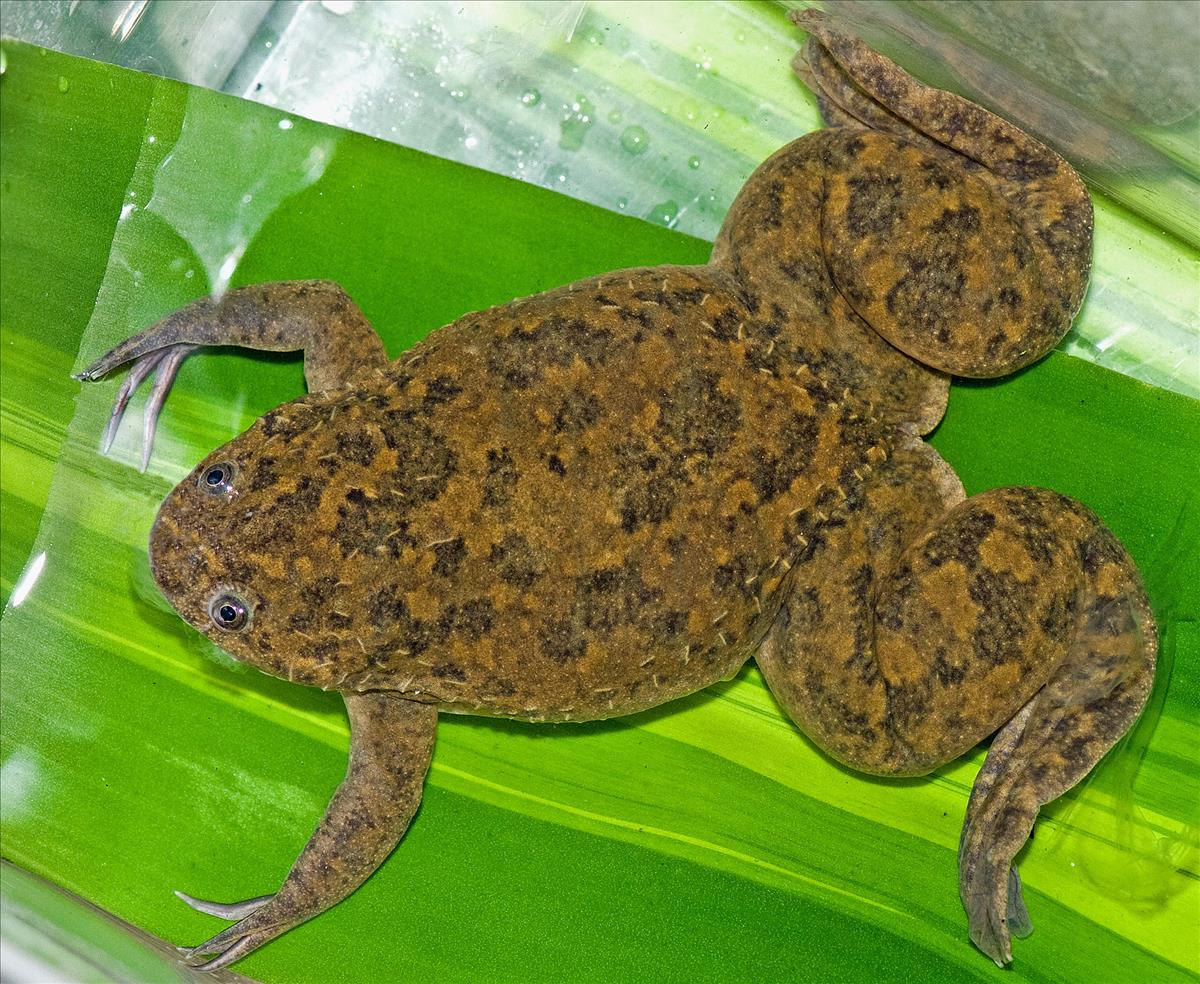 This species of frog has a rather unique morphology; it lacks a tongue and a visible ear. The body is flattened and head is wedge-shaped and smaller than the body. It has two small eyes found on the top of the head and no eyelids. Its front limbs are small and are not webbed. Its hind legs are large and webbed, and the three inside toes on either foot have claws, hence the common name. It has smooth slippery skin which is multicolored on its back with blotches of olive gray or brown and gray, while the underside is creamy white with a yellow tinge. Lateral lines are located along its back. Males weigh about 60 grams, are about 5 to 6 centimetres long, and lack a vocal sac. Females weigh about 200 grams, are about 10 to 12 centimetres long, and have cloacal extensions at the end of the abdomen.

These frogs are found along the African Rift Valley south of the Sahara in east and southern Africa. They are also found in South Africa and Namibia and Angola in western Africa. As an invasive pest species they are now found in freshwater areas all over the world. It has been introduced to, Chile, France, Indonesia, Italy, Mexico, Portugal, the United Kingdom, and the United States.

Xenopus laevis live in warm, stagnant grassland ponds as well as in streams in arid and semi-arid regions. The ponds are usually covered in green algae, devoid of any higher plant vegetation. They can tolerate wide variations in water pH. It thrives in temperatures from 15 to 26 degrees Celsius. It is almost totally aquatic, only leaving the water when forced to migrate.

African clawed frogs are carnivorous and eat anything they can find. They are scavengers and eat living, dead, or dying arthropods and other pieces of organic waste. It has a voracious appetite and attacks anything that passes in front of it. Tadpoles are exclusively filter feeders. Tadpoles swim head down, vibrating the tail filament to stir up food including algae, diatoms, protozoans, and bacteria.

Xenopus laevis is sexually mature in 10 to 12 months. Mating can take place during any time of the year, but is most common in the spring, and can take place up to four times per year. Males vocalize during the evening to attract females. Although the male lacks a vocal sac, it produces a mating call by rapid contractions of the internal laryngeal muscles. This mating call sounds like alternating long and short, raspy trills and is made underwater.

Females will hear the sound, and respond with either an acceptance call (a rapping sound) or a rejection call (slow ticking sound). This is a nearly unique behavior in the animal world; rarely does a female answer the males call. Mating often takes place at night, when there are few disturbances.

Males will develop mating pads on the underside of their forearms and hands. The mating embrace, amplexus, is pelvic, whereas most frogs have axillary (front limb) amplexus. The female can release hundreds of sticky eggs during the three to four hour event, which are typically attached to plants or other anchors, one or more at a time.

Eggs grow into filter-feeding tadpoles. The tadpole then metamorphoses into a small froglet. The tail is absorbed into the body during this time and sustains the nutritional requirements during this four to five day period. The total change from egg to small frog takes about six to eight weeks. African clawed frogs can reach 15 to 16 years old in wild and feral populations. Captive animals have been known to live as long as 20 years.

All species of the Pipidae family are tongueless, toothless and completely aquatic. They use their sensitive fingers, sense of smell, and lateral line system to find food. They lack true ears but have lateral lines running down the length of the body and underside, which is how they can sense movements and vibrations in the water. Pipidae have powerful legs for swimming and lunging after food. They use the claws on their hind feet to tear apart larger pieces of food. Hands are used to shove food towards their mouths while using a hyobranchial pumping mechanism to draw or suck food further inside the mouth.

Adults have an efficient immune system. Although a rather inactive creature, it is incredibly hardy. At times the ponds that Xenopus laevis is found in dry up, compelling it in the dry season, to burrow into the mud, leaving a tunnel for air. It may lie dormant for up to a year. If the pond dries up in the rainy season, they may migrate long distances to another pond, maintaining hydration by the rains. It is an adept swimmer, swimming in all directions with ease. It spends most of its time underwater and comes to surface to breathe. Under conditions of low oxygen they breathe through well developed lungs by gulping air at the surface. They release slippery mucous secretions from the skin to repulse predators.

Some cultures use it as a source of protein, an aphrodisiac, or as fertility medicine. The introduction of the largemouth bass (Micropterus salmoides) has been implicated in the decline of clawed frogs in Africa, where these frogs are used as a popular fish bait. Tadpoles are preyed upon by fish.

Clawed frogs are intolerant of water loss and not capable of sustained overland travel. Extended periods of drought greatly reduce their numbers.

It has become an invasive species all over world because it was used in human pregnancy tests in the 1940's. When more effective means of pregnancy tests were made available, many were released to the wild and became very prolific in several countries.