Roads pose a major threat to many reptile and amphibian (collectively called “herps”) populations. Animals, including herps, need to access different resources available in different parts of their habitat depending on their age and the time of the year. When roads go through the habitat, they separate animals from these resources and from other individuals, causing habitat fragmentation. This forces animals to cross the road to try and reach these other resources, leading to wildlife-vehicle collisions. This is especially true in southern Ontario, as it has the greatest density of people in Ontario (leading to increased traffic) and roads. Did you know in southern Ontario you cannot travel more than 1.5 km in a straight line without hitting a road? This increases the risk of vehicle collisions for urban herps.

Compared to other animals such as birds and mammals, herps especially are at risk of vehicle collisions. Amphibians, such as frogs and salamanders, are slow-moving and may cross roads when dispersing from their natal ponds (the ponds where they were born) to other habitats. Snakes use roads as a heat source to bask (warm their bodies by laying in a warm, sunny place) and cross roads to reach nesting or hibernacula (overwintering) sites. They also respond to incoming cars by stopping. Turtles travel to find mates, nesting sites, and overwintering sites, and sometimes nest on the side of the road. Snapping turtles will jump when threatened, so will hit the underside of cars if people try to drive over them. Road mortality is especially harmful for turtle populations, as turtles have a low chance of surviving to adulthood. Once turtles reach adulthood, it is crucial that they survive and continue to reproduce – the death of even a small number of adults can lead to population declines. 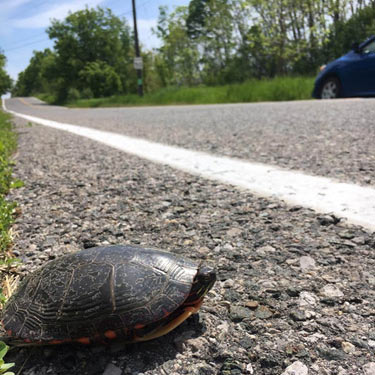 Roads pose a major threat to turtles and other herps through habitat fragmentation and wildlife-vehicle collisions. Herps are especially at risk of vehicle collisions as they do not avoid roads, cross slowly, and may cross roads multiple times throughout their active season (approximately April to October).

To better understand road mortality threats to urban herps, the Adopt-A-Pond team has been collecting road mortality data on roads near the Toronto Zoo. The Ontario Road Ecology Group (OREG) first surveyed these roads in 2010 and 2011 and Adopt-A-Pond has continued these surveys since 2017. Our road mortality surveys take place along stretches of road near wetlands and green spaces. When a deceased animal is found on the road or the shoulder, its precise location is recorded, along with weather conditions (like precipitation and air temperature) and habitat information (such as if it’s close to a wetland or train tracks). We use this data to identify areas where there are high numbers of animals crossing the roads, called “mortality hotspots”, and to model the factors that influence where and when animals decide to cross. These results tell us the best places to focus mitigation efforts. You can help collect data on crossing turtles and frogs through Adopt-A-Pond’s Turtle Tally and FrogWatch Community Science programs. This data is shared with interested parties across Ontario to inform mitigation projects, meaning your contributions are helping to prevent future road mortality! 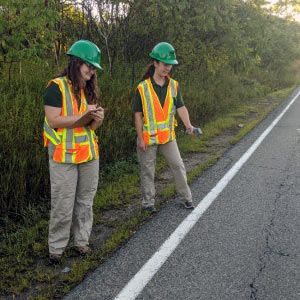 The Adopt-A-Pond team records weather conditions and habitat information to model the factors that influence where and when animals decide to cross roads.

After identifying road mortality hotspots near the Toronto Zoo, Adopt-A-Pond received funding from the Species at Risk Stewardship Fund (formerly managed by the Ontario Ministry of Natural Resources and Forestry, now by the Ontario Ministry of the Environment, Conservation, and Parks) in 2018 to start a mitigation project. With partners including Parks Canada, City of Pickering, Toronto and Region Conservation Authority (TRCA), and University of Toronto Scarborough (UTSC), we installed fencing to prevent small- and medium-sized animals from crossing the road. The fencing was installed on both sides of the road and connected to a concrete culvert. The fencing allows the culvert to act as an “ecopassage”, which means a tunnel or bridge that allows wildlife to safely cross a road or a similar hazard. 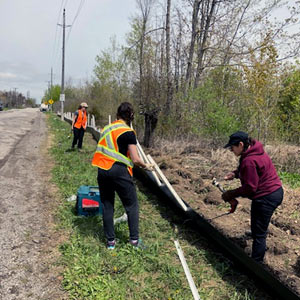 The Adopt-A-Pond team installed fencing in May 2019 to prevent animals from accessing the road and direct them to cross through the culvert. 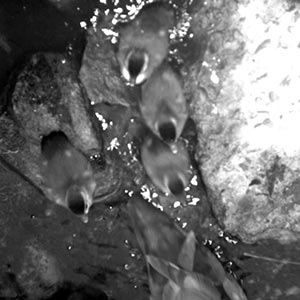 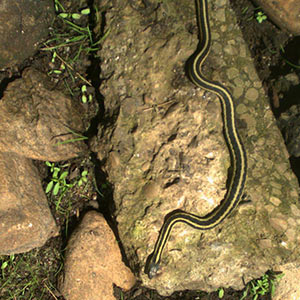 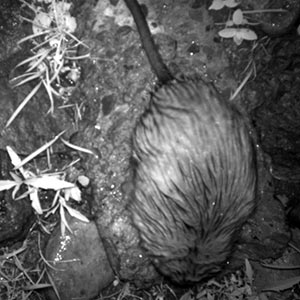 Photos of mallard ducklings, an eastern garter snake and a muskrat crossing the culvert as an eco-passage.

Helping a Turtle on the Road

Small turtles can be picked up easily by holding both sides of the shell with your thumb on top of the turtle's carapace (upper shell) and your fingers on the bottom of the turtle's plastron (belly shell). Hold the turtle's belly away from you because frightened turtles may nip and some will pee when they are scared. Although all turtles have the capacity to bite, most will simply hide in their shells. Snapping turtles are the exception - they will try to snap at you and scare you away. Remember that the turtle does not know you are there to help and is often very frightened, thinking you are a large predator. Carry the turtle close to the ground, it may claw and squirm when picked up and you don't want it to fall very far if it wiggles out of your hands. Be sure to move the turtle to the other side of the road in the direction that it was headed; otherwise it will turn around and try to get there on its own again.

What you need to move a turtle across the road:

To move a small turtle: To move a Snapping Turtle:


If you stop for a turtle and find that it is injured, there are a number of wildlife rehabilitators that will take it in and fix it up. A list of these can be found at the bottom of this page. You are legally allowed to have a turtle for 24 hours while it is in transit to a licensed rehabilitator. Remember that the turtle may have internal injuries that are not yet apparent, so handle with care during transport. Keep the car radio low and take care turning while driving to reduce stress to the turtle. During this time keep the turtle dry and warm. Do not place it in water or offer it anything to drink or eat. The turtle should be kept at room temperature, around 18-22 degrees Celsius. If it is in your car, place it in an area away from the air conditioning vents. If the turtle has died, but you believe it still has eggs inside, many rehabilitators will remove the eggs and incubate them artificially. The eggs can survive in a deceased mother if they are not exposed to extreme temperatures, so it is still worth it to try and get the turtle to a rehabilitator as soon as possible. If you are planning on taking a turtle to a rehabilitator, be sure to call them first. Many function only with volunteer staff and may not be available if you show up unexpectedly. Your call will also give them a chance to let their veterinarians know that a turtle is coming in. Be sure to record the location where the turtle was found so it can be released back into its home once it recovers.

What you need to take an injured turtle to a wildlife rehabilitator:

By keeping these supplies in your car you will be well equipped to help turtles you may encounter while driving. You can take injured turtles to the following centres in Ontario. Contact these locations for more information on local rescue centres in your area:

You can also contact your local Ministry of Natural Resources office for a list of authorized wildlife rehabilitators in your area.

Please note that the Toronto Zoo does not take in injured or unwanted turtles.