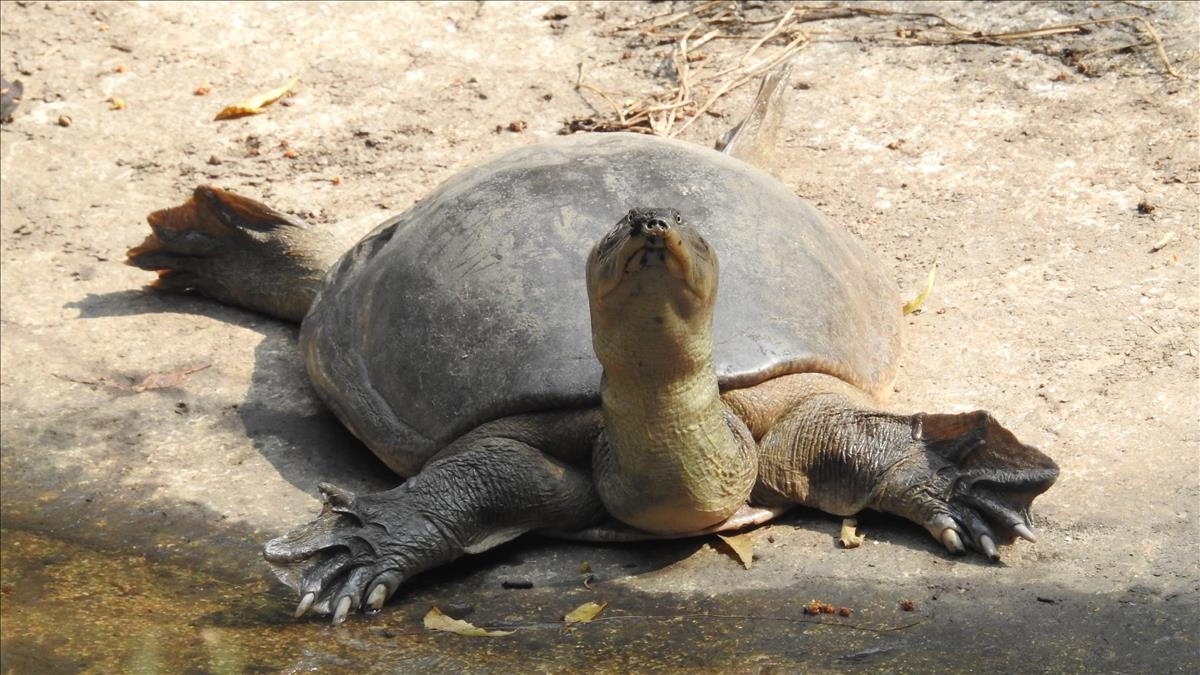 In contrast to other turtle species, softshelled turtles lack horny scutes. They are covered instead with a tough, pliable, leathery skin. The body lacks scales with the exception of modified scales on the limbs. The carapace is broad and flat. The carapace of young turtles is olive to light yellowish-brown or grey, with black-bordered "eye spots" around the shell's rim. There is some size and pattern sexual dimorphism. Males retain their juvenile colouring. Females tend to darken and become blotched or brown. Males are smaller than females and have longer and thicker tails. The male carapace is slightly rougher. Short, inconspicuous spines at the front of the carapace give this turtle its name. The limbs are olive to light brown and may be mottled brown. Their feet are strongly streaked and spotted. The head is long and narrow with a black-bordered yellow streak that extends from the snout through the eye and onto the neck. The snout is long with flexible nostrils, each bearing a lateral ridge from the nasal septum.

The eastern spiny softshelled turtle, Apalone spinifera spinifera occurs in the eastern United States and southern Ontario, west through Wisconsin and south to Mississippi. In Canada, it is restricted to the Thames and Sydenham river drainage; North Shore of Lakes Erie and St. Clair; and Hamilton Harbour.

It is highly aquatic, and rarely leaves the vicinity of water. Commonly found in open areas such as large streams, inland lakes and reservoirs, marshy creeks and farm ponds, ditches, gravel pits, and other permanent bodies of water. Prefers shallow water with a sand or mud bottom but can withstand moderate currents, using their long snouts to breathe at the surface of the water.

They breed in May through to August. Mating takes place in deep water. They respond to tactile stimulation. In courtship, males nudge the female's head while swimming and if she chooses to mate, the male will swim above the female without clasping her with his claws (unlike most other turtles). Females lay clutches along a sunny sandbar or gravel bank in a flask-shaped cavity that they dig close to water as quickly as possible (usually within an hour). Females invest energy into supplying their eggs with nutrients for development and deposit them into a safe nest. Once the eggs are laid there is no further parental investment. Spiny softshelled turtles sometimes nest more than once during a single season. Clutch size varies, usually between 12 to 18 eggs. The eggs are 28 mm in diameter. Hatchlings emerge late August to October.

They are strong swimmers with large webbed feet and are extremely fast both on land and in water. Much time is spent basking in the sun on logs or river banks. If disturbed, they will quickly retreat into the water and bury themselves in sand, leaving only their heads visible. They sit on the bottom of the water and rock back and forth covering themselves with mud and sand until buried. It can lie like this for hours, either with its nose at the surface of the water or taking oxygen directly from the water through vascularized areas in the mouth and cloaca. They also take refuge by hiding under rocks. This also enables the turtle to wait for prey to swim close. They use their sense of vision and touch to find prey. Spiny softshelled turtles spend October to April in the water buried underneath substrate in a state of dormancy.

Habitat pollution, exploitation by humans and loss of suitable nesting sites. Nests are readily destroyed by raccoons, foxes, and other mammals. Hatchlings are also vulnerable to predation by raccoons, herons, and large fish. Adults are susceptible to boat propeller injury.