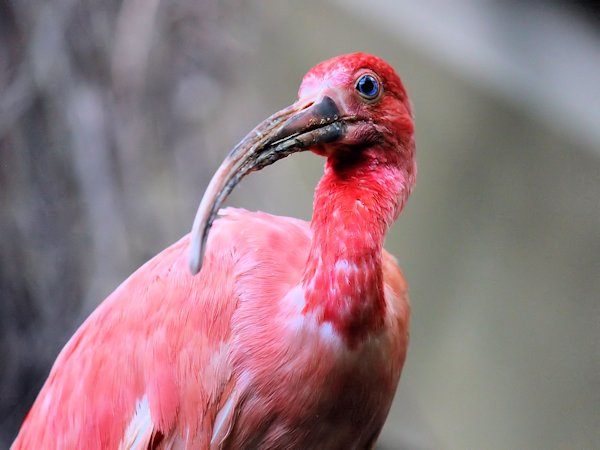 Eudocimus ruber has deep scarlet plumage, a long, downwards-curving dark bill, black eyes and long scarlet legs. Its wings are wide with black primaries. It stands 70 cm in height. While the males may be slightly larger, both sexes are very similar in appearance. Young birds are duller and have light brown to greyish white feathers.

They range along the coasts of northern South America, also Trinidad (where it is the national bird) and Tobago. Occasionally they wander into Central America and have been introduced to southern U.S.A.

The coastal areas of tropical rainforests, mud flats and wetlands, including mangrove swamps.

Males use elaborate preening and flight displays to attract females. Breeding pairs will at times, intertwine their necks as part of the courtship rituals. The female lays one to three eggs, but normally two. The incubation period averages 23 days. Eggs are a pale bluish-green colour with brown markings. Both parents guard the nest. In the wild these birds can live up to fifteen years, and in captivity up to twenty.

Immature ibis are brown-white. As they mature, they develop their scarlet colour by eating crustaceans. Although they spend long periods of time in aquatic environments, their feet are only slightly webbed. Having separated toes allows them to perch in trees and to move through the mud more easily. The long curved beak is used to probe for food in muddy, shallow waters, guided mostly by touch. As well, scarlet ibis use their beaks for preening (cleaning) feathers.

The scarlet ibis lives in large breeding colonies that can include thousands of individual birds. A social structure that favours high population density helps the birds keep watch for predators. In addition, large colonies provide ‘safety-in-numbers’ for both the birds and their eggs and hatchlings.

Tree climbing- or tree dwelling predators such as cats and monkeys can predate the eggs or the birds. Raptors are also a threat to survival. Water dwelling predators such as caimans, turtles and snakes pose dangers to the wading adults. In Trinidad, the creation of a road through the Caroni Swamp disrupted breeding for many years. They have started nesting in this location again.