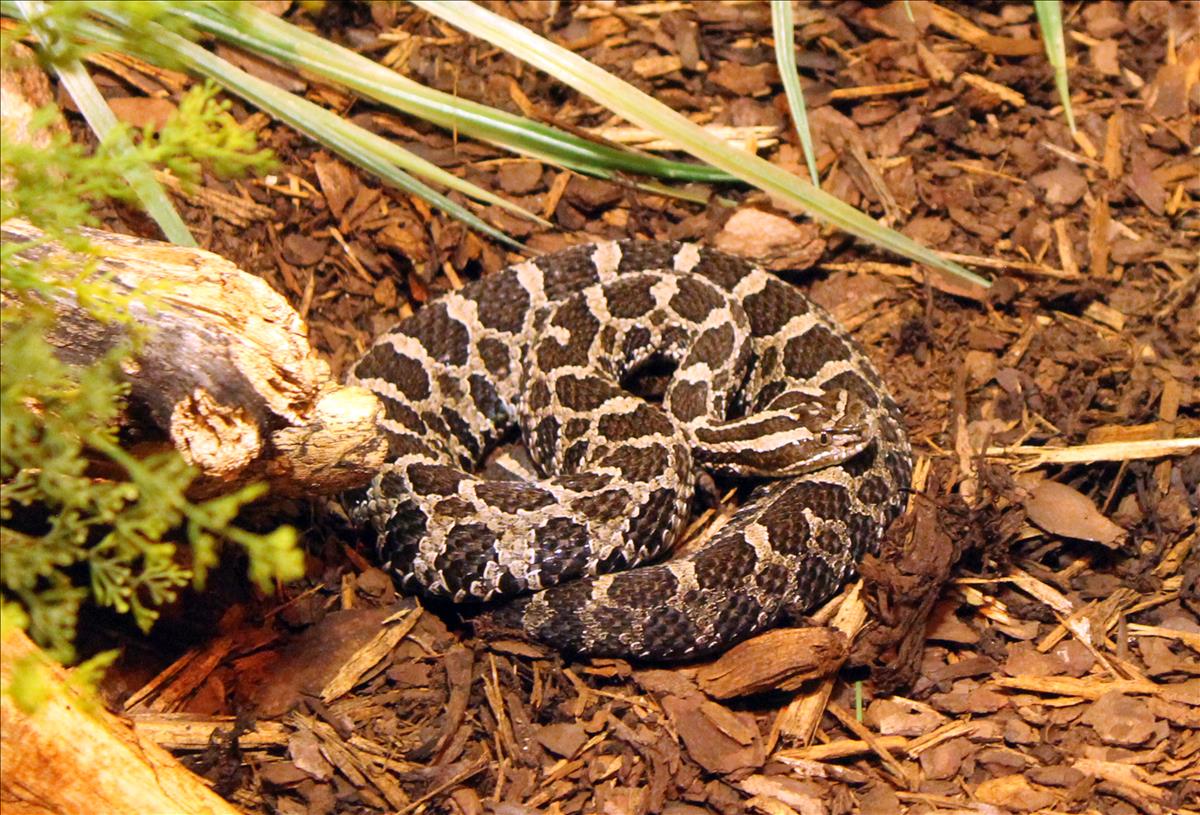 The northern pacific rattlesnake, Crotalus oreganus, is one of the largest species and the only venomous snake in British Columbia. The snake ranges in size from 60 to 150 cm. The background colour is brown, tan, olive or gray overlaid by large, dark-brown blotches along the back and smaller blotches along the sides. In older animals the blotches may be surrounded by a white or cream coloured ring. Toward the tail, the blotches appear to be more like bands around the body. There is a broad, dark stripe on each side of its face, from below the eyes to the corner of the jaw. The under parts are usually yellowish-white. Both males and females have a similar appearance. Juveniles are usually lighter in colour.

They have been recorded in British Columbia in the Ponderosa pine zones of the Okanagan-Similkameen, Thompson, Nicola and Kettle valleys as well as in the Lytton-Lillooet portion of the Fraser Canyon. This is the most northern range of the species. They are also found in California and the Sierra Nevada mountains. It is an accepted theory that all rattlesnakes in the Americas originate from north-central Mexico.

Rocky terrain or talus areas in forest or grassland habitats with high rodent densities. In summer they are found in dry, open grasslands with sparse or scattered tree cover basking on sunny, rocky ledges. During hibernation, from September to April they hide in rock fissures or caves; located on south facing rocky slopes or ridges at elevations of 500 to 625 metres. In the Sierra Nevada Mountains they have been found at 3,500 metres. At this altitude, they hibernate for up to seven months.

Studies in British Columbia have shown that female rattlesnakes do not produce their first litter until they are six to eight years old. The males reach sexual maturity in three to four years. Mating occurs in August or early September. The females store sperm over winter with ovulation and fertilization occurring the following spring. Pregnant females stop feeding and stay close to their den during summer as embryos develop. An average of five young is born live, 13 to 14 months after mating. Immediately after birth, the emaciated females enter hibernation while the newborns stay near the den for two weeks, shed their skins and then enter the den to also hibernate.

Females undergo a total fasting period of 19 months or longer during pregnancy and hibernation. Reproduction takes place every two to three years on the average since females need to double their weight before breeding again.

Rattlesnakes, which belong to the Crotalinae family, have facial pits, long movable fangs, specialized venom glands which are located behind and below each eye on the upper jaw and venom. In rattlesnakes, the preeminent method of acquiring food is by injecting venom. The snake body coils and strikes forward when attacking prey. A half body length is the usual striking distance. The prey is stabbed and injected with venom from the hollow fangs. Their venom is chemically complex but it acts primarily to break down proteins affecting the cardio vascular system.

Under the British Columbia Wildlife Act, they are considered to be
“vulnerable/sensitive” and are legally protected. Since the shorter above ground period in British Columbia and the northern states limits their feeding, they grow more slowly and mature later than in the south. The slower reproductive rate means a slower recovery after disturbances such as habitat destruction. Loss of habitat can be the result of land development, either homes or agriculture, and overgrazing by livestock causing reduction of prey animals. They are persecuted by humans out of fear.