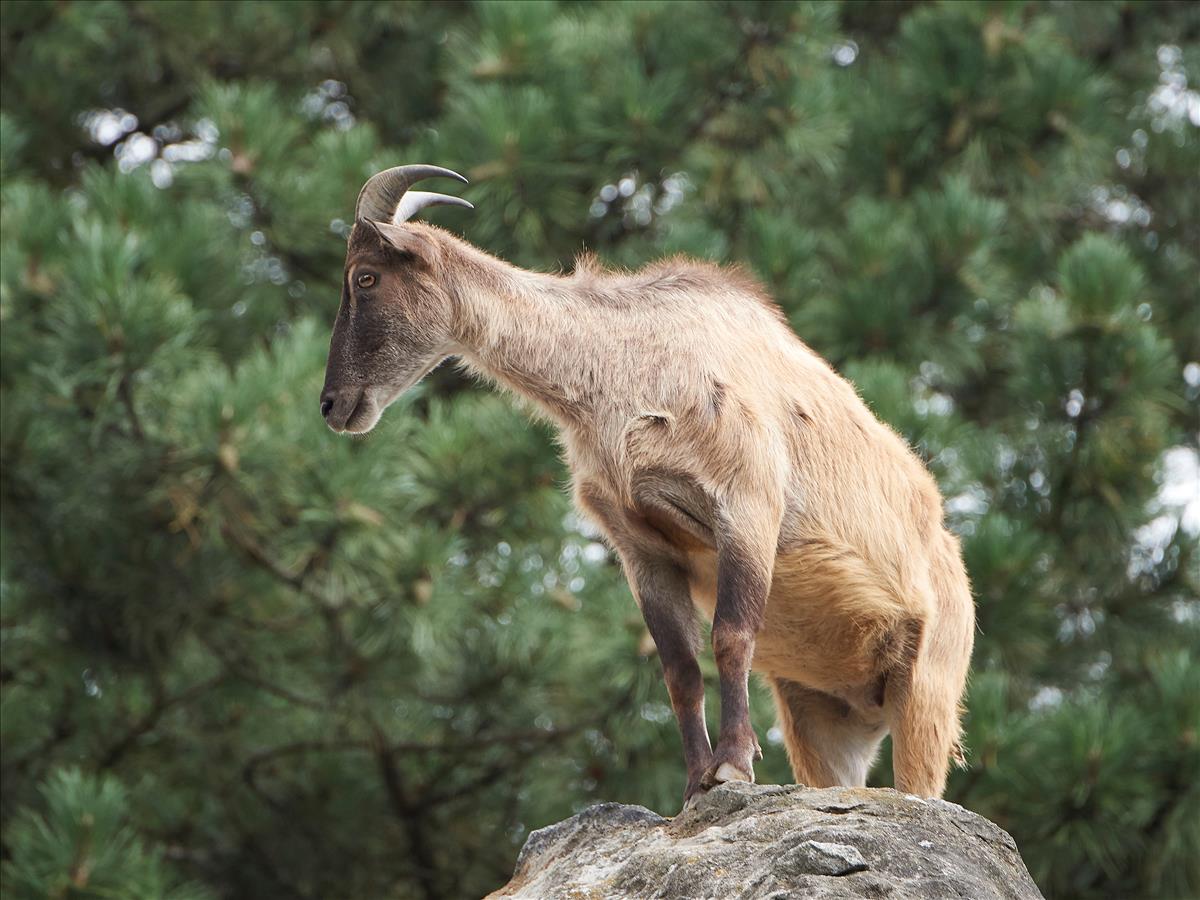 The tahr is a near kin to the goat, referred to as a goat-antelope. Hemitragus means semi-goat and the Himalayan tahr looks like a goat wearing some other creature’s red-brown coat. The general appearances of these animals is similar to true goats, however, they differ in a number of respects. In this genus males lack beards, the muzzle is naked, the feet have glands, and the horns are not twisted, but are somewhat laterally flattened. Both sexes have horns which curve up, back and then in. The small horns grow close together and are almost semi-circular in section, similar to those of goats. Horns are composed of a bony core, which is attached to the frontal bones of the skull and covered with a hard sheath of horny material. The shaggy mane around neck and shoulder extends to the knees and is reddish to dark brown in colour. It can be as long as 250 cm. The summer coat in both sexes is shorter and lighter brown in colour. Males are larger than females.

It is native to the southern flanks of the Himalayan Mountains from Bhutan to northern India and as far north as Tibet. It has been widely introduced elsewhere.

They live in mostly craggy and precipitous places, but never above the tree line. They prefer rocky areas where there is some shrub and forest nearby. These sub-alpine and alpine regions are from 3,500 to 4,000 metres in altitude. Seasonally, they use forests as low as 2,500 metres and alpine meadows as high as 5,000 metres.

Tahr are herbivores. They eat alpine herbs and sub-alpine scrubland plants, also leaves of trees, shoots and browse from plants in the high forest areas.

The rutting season runs from mid-October to mid-January. Younger males will follow groups of females attempting to mate with them. Older males also follow and defend individual females in estrous. Competing males display by walking stiffly, parallel to each other, heads down, horns exposed, with their main and dorsal ridge erect. When displaying to a female, the male faces her, at a right angle with his head and muzzle high, his mane erect and hiding his horns. A series of head nods are followed by brief copulation. Gestation is six months. Females leave their groups to give birth from April to July. They have one, or occasionally, two kids. The kid is able to nurse within a few minutes and can walk within three hours. Mother and kid return to the group after a few days. Kids stay with the group until they are at least two. At this age males disperse to form male only groups. Females remain in the group.

They are most active in the early morning and late afternoon. This is when they feed.

Half the daylight hours are spent resting. Vertical migrations occur daily, up slope in the morning, down slope for the night. They are wary and difficult to approach, particularly from below as they post a sentinel to keep watch for enemies, looking downhill for danger. This is a herding, gregarious species. Glands on the hooves release a substance onto the ground having a characteristic scent which an isolated animal can follow back to the herd. They are very nimble climbers, hooves being very well adapted for their mountain habitat. They have a hard rim of keratin surrounding a soft spongy convex pad. These hooves and strong dew claws allow them to be excellent climbers. The old males herd separately during the summer, living in the least approachable places, returning to the main groups only in the winter when pairing takes place. This conserves food for the main herd during the summer months.

Snow leopards are natural predators. Tahr are hunted for their meat by the people who live in the hills. The meat is thought to be a cure for rheumatism and fever. Accidental deaths due to rock slides or avalanches are not uncommon.