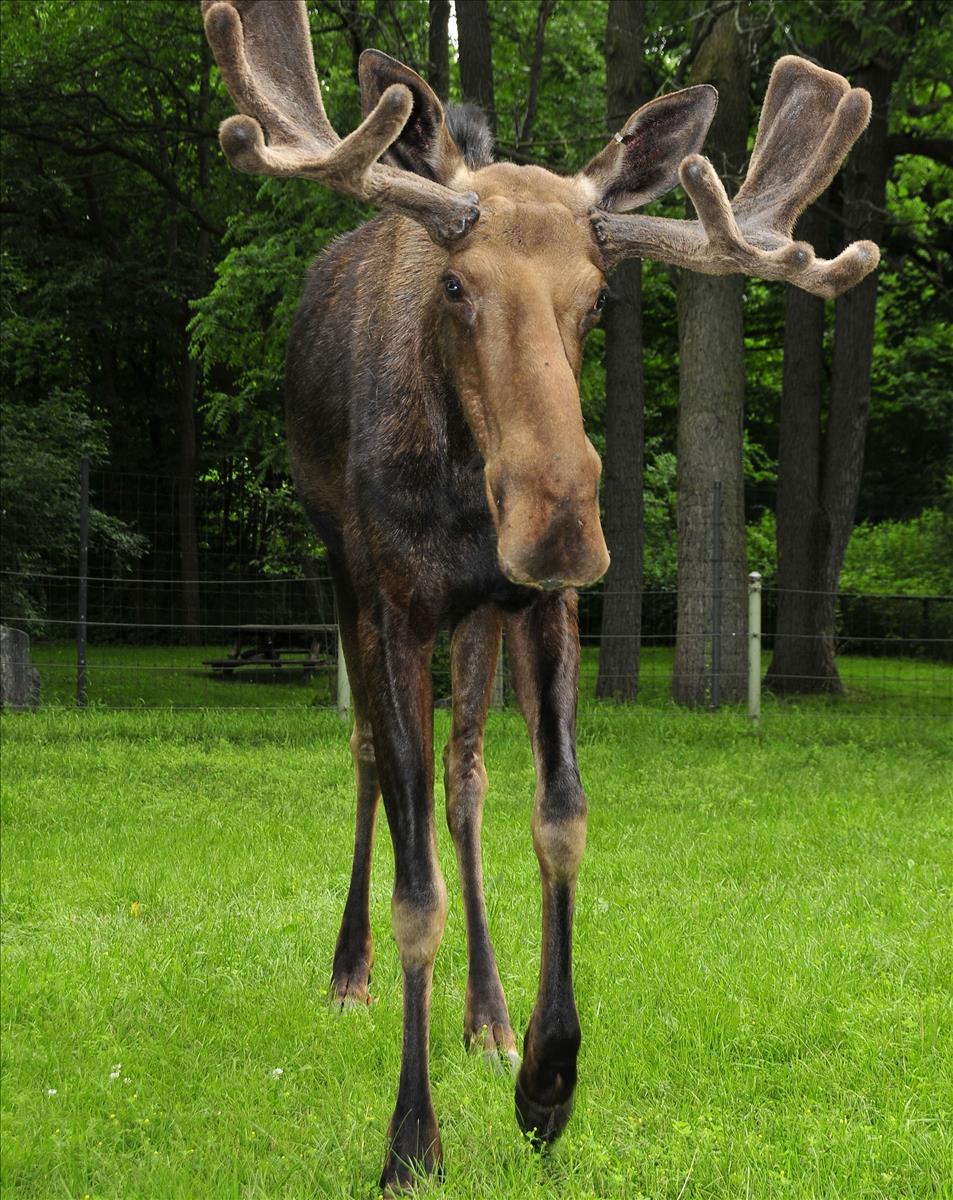 Moose are the largest member of the deer family. Legs are long and slim, ending in cloven hooves. Front legs are very long and body is deep at the shoulder, giving it a humped appearance. They are low-rumped with slim hindquarters and a well-haired stubby tail 5 -12 cm long. The neck is short, the head heavy and compact and the nose extends over a long flexible overhanging upper lip. Ears are mulish, although not as long. From the throat hangs a pendant of fur-covered skin called a dewlap (or bell) up to 35 cm long that decreases in length with age. The moose varies from dark brown, almost black, to grayish or lighter brown. Under parts and lower legs are lighter. Calves are more of a reddish color. An adult moose has 32 teeth –12 upper and 20 lower.

A mature bull in season carries a large rack of antlers which may extend two metres or more between the widest tips, but are more often 120 - 150 cm in span. The heavy main beams broaden into large palms and are fringed with a series of spikes usually less than 30 cm long. Mature bulls shed antlers in December, but younger bulls may carry theirs until March.

Northern Canada from Newfoundland to the Pacific Coast and Alaska. They are also found in northern Europe and northern Asia. European moose are known as elk and are smaller in size than the North American moose.

Temperate forests, both deciduous and coniferous, and tundra of the northern hemisphere. Found along the margins of lakes, muskegs and streams of the boreal forest, rocky hillsides of the western mountain ranges as well as the northern tundra.

In summer, moose browse on a wide variety of leaves, plants and aquatic vegetation in great quantity. Early stages of regrowth following disturbances by fire, logging, flooding, etc. provide excellent forage. Twigs and shrubs supply the winter diet and when food becomes scarce, moose will strip bark from trees. “Moose” is an Algonquin First Nations name meaning “eater of bark”. In the summer adult moose eat 20 - 24 kg of forage daily and 16 - 20 kg of twigs daily in the winter.

Breeding occurs in the fall and calves are usually born in late May and June after a gestation period of 240 - 250 days. The male’s bell has been identified as a scent organ. It is splashed with urine when bulls dig rutting pits and serves to attract females. Bulls will fight for a cow. The cows are also aggressive toward each other. In contrast to other antlered species, females assume an active role during the rut using vocal signals sounding like a long quavering moan which can be heard at a distance of three kilometers. Male vocalization during the rut is a “croak”. Most births produce a single calf but twins are not uncommon and occasionally three are born. As the time of birth approaches, the cow seeks seclusion and, if associated with her young of the previous year, will aggressively drive the young away. The yearling generally does not stray far from its mother and may re-associate with her several weeks after the birth of the new calf. Calves grow rapidly on a diet of milk and plants. They are helpless at birth and kept in seclusion for a couple of days, hidden in a thicket or on an island. At the age of only a few days a calf can outrun a man and swim readily. They stay with their mother for one year - sometimes longer. Females are sexually mature at two to three years but breed most successfully between four and twelve years. Males reach maximum weight from seven to ten years and cows around four to five years. Life expectancy in the wild is eight to ten years, seldom more than 16.

Long legs, built for wading through bogs and shallow lakes, carry the moose easily over deadfall trees or through snow that would slow down a deer or a wolf. The cloven hooves spread widely to provide support on muskeg or soft surfaces. Trotting speed is about 25 km/h, but when pursued they can travel up to 35 km/h. Moose are powerful swimmers and are quite at home in the water, sometimes diving five metres or more for plants growing on the bottom of the lake. They have been known to swim up to 19 km. Eyesight is very poor but highly efficient senses of smell and hearing compensate for this. It allows for early detection of possible danger and prompts moose into a dense cover of trees where they stand motionless until the danger has passed. They will also make for the nearest water when seeking protection.

Before bedding down, a moose will usually travel upwind for a time and then swing back in a partial circle. Thus any hunter will have to approach from windward. Both sexes attain maximum weights during late summer, early fall, and may increase their late winter-spring weights by 21-40% before entering rut.

Moose are essentially solitary and have one or several seasonally distinct home ranges to which they are strongly attached. These areas are relatively small, 5 - 10 sq. km. Although cows with calves may be an exception, moose are not considered territorial.

Main predators are wolves and bears preying upon young calves in the spring. Habitat is being altered by lumber operations. Hunters prize antlers as trophies and one moose can supply up to 270 kg of meat. Deaths on highways and railroad tracks are common, particularly when salt on roads attracts them. Moose are also susceptible to parasites hosted by the white-tailed deer, one of which is called “Parelaphostrongylus” - the common name being “moose sickness”. This is fatal to moose and as a result moose numbers decline when their range overlaps with white-tailed deer.