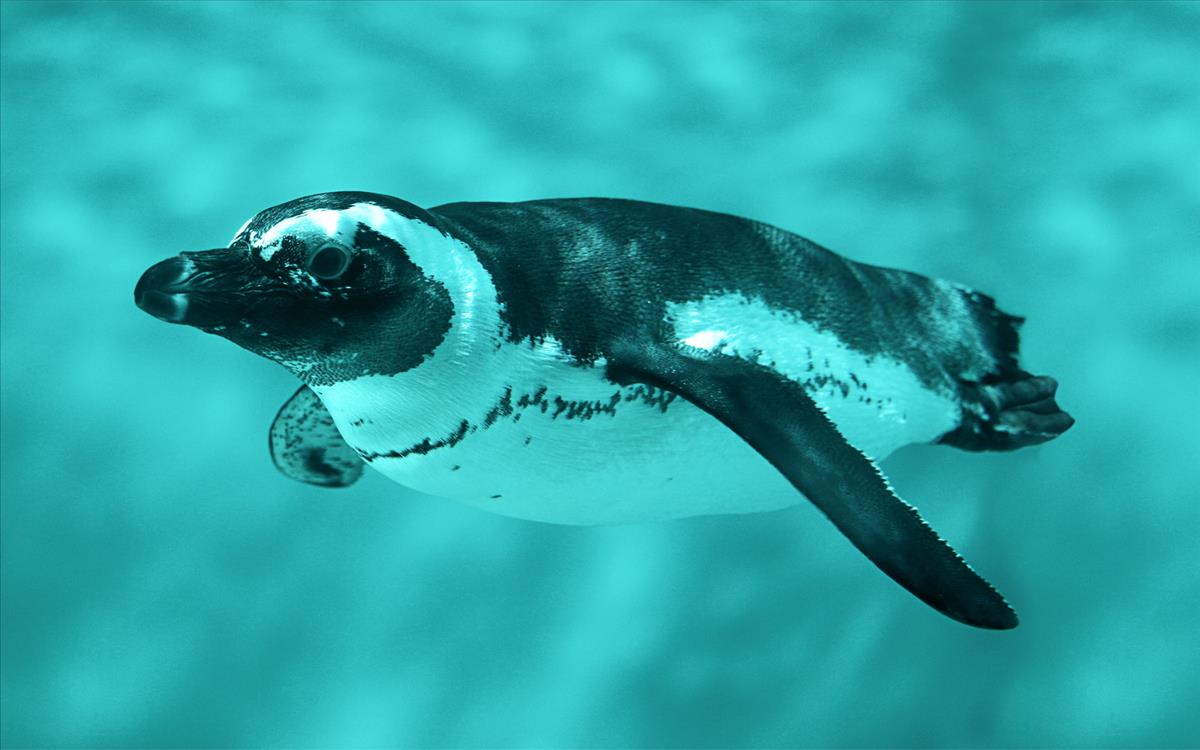 The African penguin is also known as the black-footed penguin and formerly as the jackass penguin. This medium-sized penguin has a robust body with black plumage on its back and white plumage with black markings on its chest and belly. The head, chin, throat, uppermost parts of the breast, and the whole of the upper parts are black. A broad white band commencing at the base of the bill runs above the eye, and continues around the cheeks, broadening over the upper breast.

Under parts are white with a narrow black band across the chest extending down each side of the body to the feet. A pattern of black spots on the chest is unique to each penguin, much like human fingerprints. The iris is a dark brown with a well defined white orbital ring. They have pink glands above the eyes. The bill is black with a distinct white band across both mandibles towards the tip. The legs and feet are black. The tail is short. Wings are hardened, flat oars, fused at the elbows. Sexes are similar in appearance, the male being slightly larger and with a larger beak. Juveniles have gray-blue plumage that darkens with age.

Spheniscus demersus is found on the coast and islands of southern Africa and Namibia. There is a chain of islands between Hollamsbird Island, Namibia and Bird Island in Algoa Bay, South Africa where these penguins form colonies, or rookeries, for breeding and moulting grounds. This is the only penguin species which breeds in Africa.

They spend a great percentage of their lives at sea. They return on a regular basis to their breeding grounds on land and continue to return to these sites year after year. Time is also spent on land for the few months required for their chicks to develop. Moulting occurs annually between November and January in South Africa and between April and May in Namibia when the penguins come ashore for about three weeks, long enough to moult. They fast during this period of time.

There are 17 different species of penguins; not all are found in frigid waters. One species, the Galapagos penguin, lives near the equator.

They feed primarily on shoaling pelagic fish such as anchovies, pilchards (sardines), horse mackerel, and round herrings, supplemented by squid and crustaceans. The distance they have to travel to find food varies, both temporally and spatially. On the west coast a typical foraging trip could range from 30 to 70 km for a single trip. On the south coast, foraging birds cover an average of 110 km per trip. When penguins are feeding their young, the distance they can travel from the breeding colony is more limited.

Although they form vast breeding colonies, these birds are monogamous. Pairs bond together and will return to the same breeding sites year after year. They start breeding from between two to six years of age, but normally at four years old. They have a very interesting courtship display; the male performs a shuffling dance around the female, periodically touching her bill-end. There is an almost human-like embrace when the two birds stand breast to breast, enfolding each other with their flippers and with bills interlocked. This ritual reinforces the bond between them. About 80 to 90% of pairs remain together in consecutive breeding seasons, and some are known to have remained together for over 10 years.

These penguins nest in burrows they excavate themselves, or in depressions under boulders or bushes. When excavating they lie on their breast and use their bill as a pick-axe. Historically, nests were excavated in the cap of guano that existed on most islands. However, with the removal of the guano for commercial purposes, surface nesting and nesting under bushes and other objects has become more frequent. Shelter at the nest site is important to provide shade (and protection against the temperate climate), and for protection against predators of eggs and chicks. The nest is sometimes lined with a few dried grasses or a pad of seaweed. From the time it is built, it is never left unoccupied otherwise materials would be taken by other nesting birds.

Two eggs are usually laid. The incubation period is about 40 days, with the male and female participating equally in the incubation duties. The length of the incubation shift is dependant on the availability of food at the time, but it is typically about two and a half days.

All penguins have a patch of bare skin at the base of their bellies, sometimes called a "brood patch"; this helps the parent provide enough heat to incubate the eggs. Following hatching the parents continue to brood the chicks. The chicks soon begin to attain control over their own body temperature. Adults feed their offspring by regurgitating food into the chick’s mouth. Very young penguins are at risk from predators and the parents continue to guard them until they are about 30 days old. Parents at this point return to the sea.

Chicks are then left alone in creches, or groups, a characteristic common to bird species that breed in large colonies, while their parents forage for food. The adults continue to feed chicks while the young are still present at the colony. Young penguins leave the colony once they develop their juvenile plumage, in between two to four months. When the young do leave the colony, they do so without their parents. These juveniles remain away from their natal colonies anywhere from 12 to 36 months after which time they return, to moult into adult plumage. Juveniles have gray-blue plumage that darkens with age until they have the same colouring and markings as adults when they are about 3 years old.

African penguins have developed unique adaptations to life in the temperate zone. They limit their daylight activities at breeding sites on land to early morning and early evenings to avoid too much sun. They also build their nests where there is protection against too much solar radiation. Penguins that are not breeding typically spend the entire day in the ocean or, they stay on the beach in large groups and swim frequently to stay cool. They have pink sweat glands above their eyes. The hotter the penguin gets, the more blood is sent to these sweat glands so it may be cooled by the surrounding air, thus making the glands pinker.

Their distinctive black and white colouring is a vital form of camouflage–white for underwater predators looking upwards and black for predators looking down onto the dark water (counter shading). When on the hunt for food, they can reach a speed of 20 km/h. An average dive lasts about two and a half minutes, and is regularly about 30m in depth, although dive depths of up to 130m have been recorded. Solid bones enable them to dive. Wings have become flippers, enabling them to streak through water. The feet are webbed and strongly built.

Moulting takes about three weeks to complete. Prior to the moult penguins, spend about five weeks laying down fat deposits, but lose almost half their body weight during the moult process. At the end of this phase, penguins return to sea and spend about six weeks fattening up again. This layer of fat also serves as a source of food during the breeding season when they are out of water for long periods of time.

Natural predators at sea include cape fur seals and sharks. Predators on land include mongoose, genet, and feral cats. Avian predators of chicks and eggs include sacred ibis and kelp gulls.

By far the greatest threat to these interesting birds has come from humans. The present population is probably less than 10% of that in 1900, when there was estimated to be about 1.5 million birds on Dassen Island alone. By 1956 the population had fallen to roughly half that in 1900, and had halved again by the late 1970s, when there was an estimated 220,000 adult birds. By the late 1980s the number had dropped to about 194,000 and in the early 1990s there was an estimated 179,000 adult birds. Breeding no longer occurs at 10 localities where it formerly occurred or has been suspected to occur.

The reasons for the significant decline in the African Penguin populations are well known. Initially, the decline was due mostly to the exploitation of penguin eggs for food, and habitat alteration and disturbance associated with guano collection at breeding colonies (removal of the guano layer resulted in increased predation of eggs and chicks). These factors have now largely ceased, and the major current threats include competition with commercial fisheries for pelagic fish prey, and oil pollution. Given an annual rate of decline of about 2% per year, there is considerable concern about the long-term viability of African Penguins in the wild. By the late 1990s the population had recovered slightly, and in 1999 there was an estimated 224,000 individuals.

In South Africa, all breeding localities are national parks, nature reserves or are otherwise protected. Collection of guano and eggs is no longer allowed within penguin colonies. Oiled birds are rehabilitated with great success: the population is 19% larger than it would be had no rehabilitation measures been implemented. More than 80% of birds admitted for rehabilitation are returned successfully to the wild.