We are going to be making good use of our animal waste; by using it to fuel a 500kW biogas facility. The facility, to be built on three hectares of land east of Meadowvale Road, will combine Zoo waste and food waste from a major grocery retailer to be converted into electricity, heat and fertilizer.

The 500kW facility will produce a third of the Zoo's electricity demand and will reduce our CO2 emissions by 10,000 tonnes. Using renewable energy sources, such as biogas helps in the fight against climate change by reducing greenhouse gas emissions into the atmosphere.

The plant will be operated by ZooShare Biogas Co-operative Inc. a non-profit, non-share capital renewable energy co-operative. The project represents an investment of $ 5.4 million, the majority of which will be raised from the community through the sale of Community Bonds. The project will be the first co-operatively owned biogas plant in Canada and the first zoo-based biogas plant of its kind in North America.

More information about ZooShare, the biogas project at the Toronto Zoo and its progress are available at www.zooshare.ca. 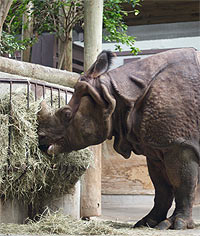