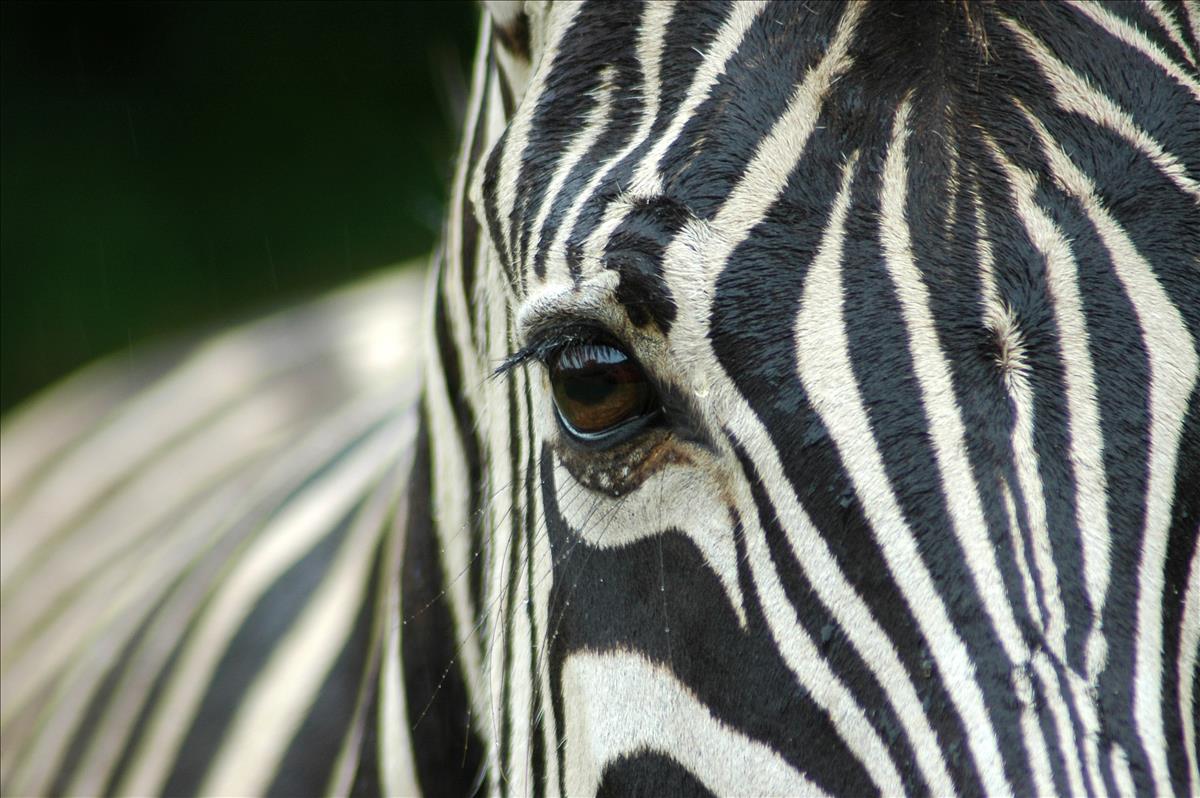 The Grevy’s zebra is the largest living wild equid. It can be distinguished from other species of zebra by its larger ears and narrower stripes. Vertical stripes cover most of the head and body, with the exception of the belly, which is white. The stripes are narrow and close-set, being broader on the neck, and they extend to the hooves. The belly and the area around the base of the tail lack stripes. The legs are long and are marked with horizontal stripes which extend down to the hooves.
A broad black stripe runs along the centre of the back, and is separated from the other stripes by a narrow white zone. The mane is very tall and erect, and also striped. Its head is large, long, and narrow with elongated nostril openings. The eyes are large, round and heavily fringed. It is mule-like in appearance with a brown muzzle and a relatively short, strong neck. The ears are very large, rounded, and conical. Foals are born with brown and white striping, with the brown stripes darkening to black as they get older. They have a mane that extends to the length of the back and shortens when they reach adulthood. There is no difference between the sexes.

Herbivorous nomadic grazer: feeds primarily on coarse grasses and sedges, but will eat bark, leaves, buds, fruits, and roots. Grevy’s zebras have incisors that they use to clip grass and numerous cheek-teeth that grind their food.

Within a single population, around ten percent of the mature stallions will occupy territories from which they have sole access to receptive females, although other males are still tolerated within the area, provided females are not in oestrus. Amongst these territorial stallions, the most dominant ones control territories near open watering holes, which mostly attract mares with foals, while more subordinate stallions control territories away from water with more abundant vegetation, which mostly attracts mares without foals. The resident stallions of territories will try to subdue the entering mares with dominance rituals and then continue with courtship and copulation.

Grevy's zebras can mate and give birth year-round, but most mating takes place at the beginning of the rainy season and births mostly take place in August or September after the rainy season. Mares become sexually mature at three to four years. A female in estrous may wander though as many as four male territories a day and will mate with the dominant stallions in each of them. Bachelors, or outside territorial stallions, sometimes "sneak" copulation of mares in another stallion’s territory. While female associations with individual males are brief and mating is promiscuous, females who have just given birth will reside with one male for long periods of time and mate exclusively with that male. Lactating females are harassed by males more often than non-lactating ones and thus associating with one male and his territory provides an advantage as he will guard her against other males.

Gestation of the Grevy's zebra normally lasts 13 months, with a single foal being born. Within an hour after birth, the young are up and about. Initially, the mare and her newborn stay away from the others for a few days, preventing other mares from approaching her foal. Isolating the foal in this way helps with bonding and prevents it from accepting another female as its mother. She imprints her striping pattern, scent and vocalization on her foal. After this period of bonding, and until the foals reach the age of three months, females form small groups (three females and their foals). Mares may leave their foals in "kindergartens" while searching for water. Kindergartens tend to be guarded by an adult which may be a territorial male. Foals remain dependent on their mother’s milk until six to eight months of age and stay with its mother for up to two to three years.

Zebras rely largely on their sense of sight and hearing. Large eyes set far back on the head give a wide field of view. The large ears can rotate to pick up sounds from many directions. The zebra’s stripes are used as a camouflage to hide the zebra from its predators. The stripes on a moving zebra serve as a disruptive pattern, confusing a pursuing predator. Long legs and hooves help the animal to run fast. A zebra can run up to 64 km/h. Speed is its only defense from predators (lions, cheetahs, and hyenas), from which they can outrun over long distances.

As a response to the sparse plant life in their habitat, Grevy's zebras usually do not form stable herds and only congregate during periods when they must migrate to find grazing or water. Grevy’s zebras have a much more open society than those of other equid species and associations between individuals, other than between a mother and her foal, rarely last for more than a few months.

Male territories are patrolled and marked with dung and are the largest of any living herbivore - up to ten square kilometres. Territorial males also vocalize loudly to assert their dominance within the territory. To adapt to a semi-arid environment, Grevy's zebra foals take longer intervals between suckling bouts and do not drink water until they are three months old. Stallions have large testicles and can ejaculate a large amount of semen to replace the sperm of other males. This is a useful adaptation for a species whose females mate polyandrously.

There has been a 70% reduction in population size in the last 30 years. Threats include hunting for skin and meat, and loss of grazing habitat and access to water, due to competition with increasing herds of domestic livestock. Additional threats are due to reduced river flow due to irrigation, and uncontrolled tourism in reserves, which causes disturbance and destruction of vegetation.