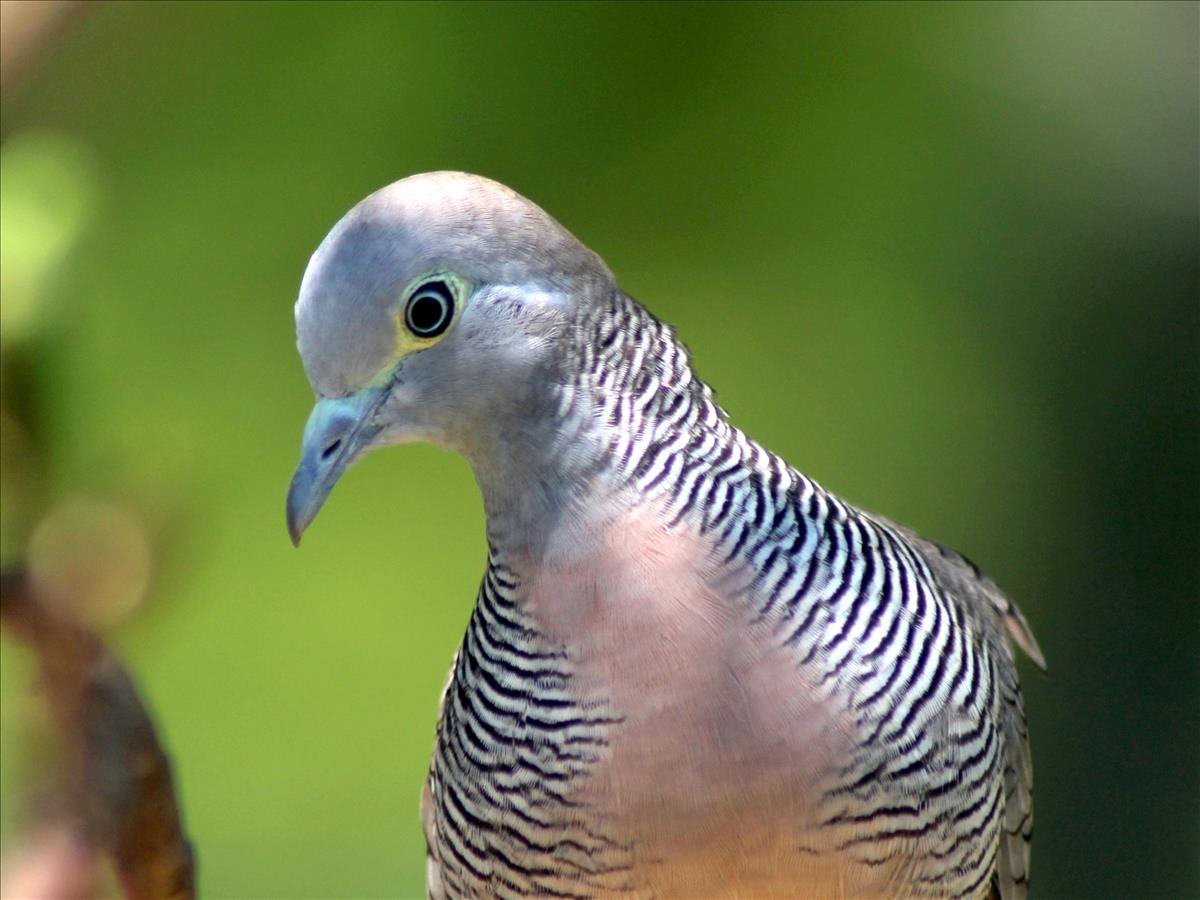 A slender, long-tailed dove measuring 21 cm. The forehead, face and throat are a pale, bluish grey; the top of the head and nape are grey-brown. The hind neck is finely barred in white-brown and black; the sides of the neck, breast and flanks are barred black. The center of the breast is mauve pink becoming white on the belly and under-tail coverts, the upper-parts are light brown becoming grey on the wing-coverts with a black edging to the feathers giving a barred effect. The secondary and primary feathers are a dark, greyish brown with some chestnut on the basal parts of the inner webs forming an obscure patch on the underside of the wing. The under-wing coverts are pale rufous barred with black. The central tail feathers are of equal length but the three outer pairs are progressively shortened, graduating the tail when spread. These feathers are grey while the outer pairs are blackish with prominent white tips. The orbital skin is blue sometimes having a greenish or grayish tinge; the bill is grey or grey-brown at the tip and a bluish or greenish grey at the base. The feet and legs are a dull pink. Both sexes are the same; juveniles are paler and browner than the adults and have barred feathers on the back and buff fringes on the wing-coverts.

The zebra dove inhabits a wide variety of low-lying, open country with some trees and bushy growth including dry woodland or scrubland and occasionally along the edges or in clearings of primeval jungle or forest. They also appear in agricultural areas and even in cities and gardens.

Typically found in Indo-Malayan and Australasian regions from southern Tenasserim, south and east to Luzon in the Philippines, the Lesser Sunda Islands, Tenimber and Kei Islands and southern New Guinea. They have been successfully introduced into Thailand, Sumatra, Borneo, Moluccas, Madagascar, Seychelles, St. Helena and the Hawaiian Islands.

The diet consists of a variety of small seeds, especially weed and grass seeds with a limited amount of insects. Where available, they will learn to feed on cultivated grains such as rice and even artificial foods including breadcrumbs. They feed on the ground in pairs or small groups and in large numbers at good feeding grounds.

The zebra dove nests in a tree or a bush anywhere from one to ten metres above the ground or even on the ground when there are no predators. Nest building varies per location: in Hawaii the nest is quite flimsy; in Seychelles it is very substantial. Breeding occurs when conditions are favourable usually during the early months of the year. During the copulation ceremony the male performs a bowing display with a raised and fanned tail. After the male mounts the female for a few seconds, he dismounts holding the head high uttering a single “cro-o-o-o” sound. The process is repeated a second time. At the third mounting, the male gives three consecutive “cro-o-o-o” sounds and then copulates. There are two white eggs, the incubation period is 13 days and fledging occurs 11 to 12 days later. Both parents produce crop milk to feed their young.

Wild zebra doves are often heavily trapped for sale as cage birds. It is one of the more favoured “song” birds in S.E. Asia. Avian pox and avian malaria (both introduced via mosquito vectors) is a serious threat in some areas. In Hawaii, native forest birds have no natural immunity to it. In agricultural habitats they are affected by the use of pesticides and herbicides.