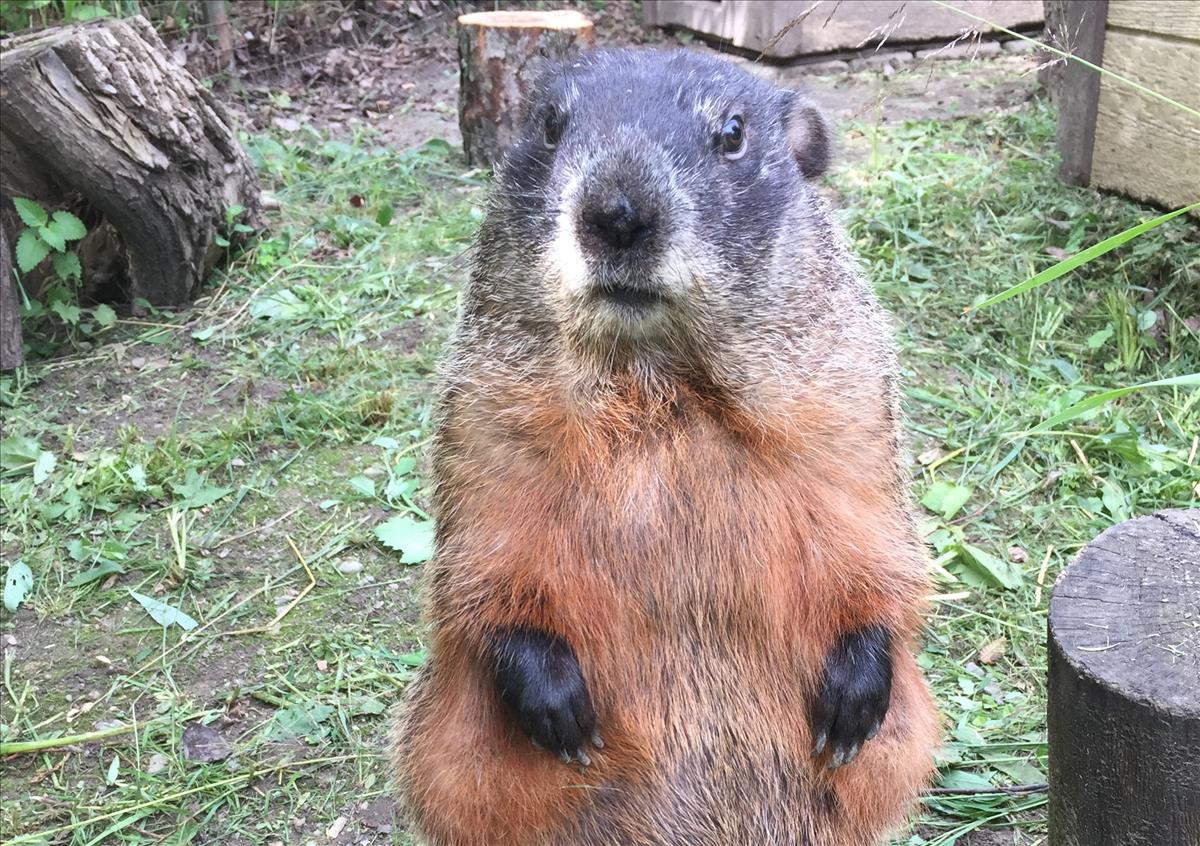 The woodchuck, or groundhog, is a member of the marmot family, which is a large group of ground-dwelling squirrels. It is the best known of the American marmots. There are six geographically defined subspecies of woodchucks varying slightly in colouration and size.

The woodchuck has a thickset body, broad, flat head, very little neck, short rounded ears, short limbs, and tail. The dark-coloured, bushy tail is about one-fourth as long as the total body length, much shorter in comparison to other squirrels. Their hind feet have five well-developed digits; one of the five digits on the front feet is rudimentary and covered with a flat nail. All other toes have flattened curved claws suitable for digging. Females have four pairs of teats.

The dense woolly underfur of the back and sides of the woodchuck is somewhat obscured by longer, less dense, guard hairs. These guard hairs are banded with alternating dark and light colouring (bands usually yellowish to reddish brown, hairs tipped with white), giving this mammal a frosted appearance. The underfur of the woodchuck is gray with yellow tips, much paler from the dorsal area. The small, low ears are on top of a black-coloured head with small black eyes. The woodchuck is the largest sciurid in its geographic range.

The six geographic subspecies of woodchuck occur over the northeastern United States, all of the Canadian provinces and territories (except Prince Edward Island), the Yukon, and central Alaska.

With the deforestation of North America, and the cultivation of fields and pastures, the woodchuck has thrived. They prefer fields, fence rows, farmlands, as well as deciduous and coniferous woodlands.

Mainly herbivores. Eat mostly green vegetation such as clover, alfalfa, buttercups, dandelions, plantains, goldenrod, and asters. In early spring, before vegetation growth, they eat bark and twigs of trees such as sumac, cherry, and dogwood. They also eat garden crops such as corn, carrots, beans, beets, lettuce, cabbage, turnips, strawberries, and melons which makes them a pest to growers. They may eat insects and ground nesting young birds opportunistically.

Females may breed after 11 months of age, but usually at about two years. Males are sexually active on emerging from hibernation in the spring and may fight for partners. Gestation is 31 - 32 days and all young are born in May. Litters may be from one to eight with an average of four. The young are born naked, pink, blind, and helpless in a lined nest. They get short black hair after two weeks and start to crawl after three weeks. Their eyes open at day 26 and they soon start to eat green material. At five weeks they emerge from the den and play and romp around the entranceway. The young are weaned at about six weeks. They are usually forced to disperse in their first summer of life.

The woodchuck usually feeds during the day, around noon in the early spring, and early in the morning during hotter weather. It excavates two types of burrows for shelter; a hibernating den, which is commonly in woods or fence rows, and a summer den in a field. The burrow of an adult woodchuck may have two to five entrances and several chambers which are kept clean and often well padded with leaves. Faeces are buried in a blind tunnel or in the soft earth of the entranceways. The short, but powerful legs are well adapted for digging. It has a slow walk, but can run to its den when scared, giving a sharp whistle signifying danger, and putting up a strong defense with chattering teeth when challenged. Quick bursts of speed and diving down den entranceways keeps them safe from predators.
They are true hibernators; they enter a prolonged state of torpor with lowered body processes. Heartbeat slows down from 100 beats per minute to as few as 15 beats per minute, body temperature drops from about 35 ˚C to 8 ˚C and respiration also decreases. It usually hibernates when it gets cold in November to the first mild spells in April. Females usually share their den with offspring over the winter. Woodchucks are usually solitary, but pairs may share a den during summer.

Woodchuck incisors are ever-growing and are heavily constructed. The anterior tooth face is ivory or yellowish ivory in colour, lacking the dark yellow pigmentation of other rodents.

They are predated upon by cougars and wolves, but with the reduction in numbers of these two species, the woodchuck population has increased. Large hawks, rattlesnakes, coyotes, and red fox predate young woodchucks.