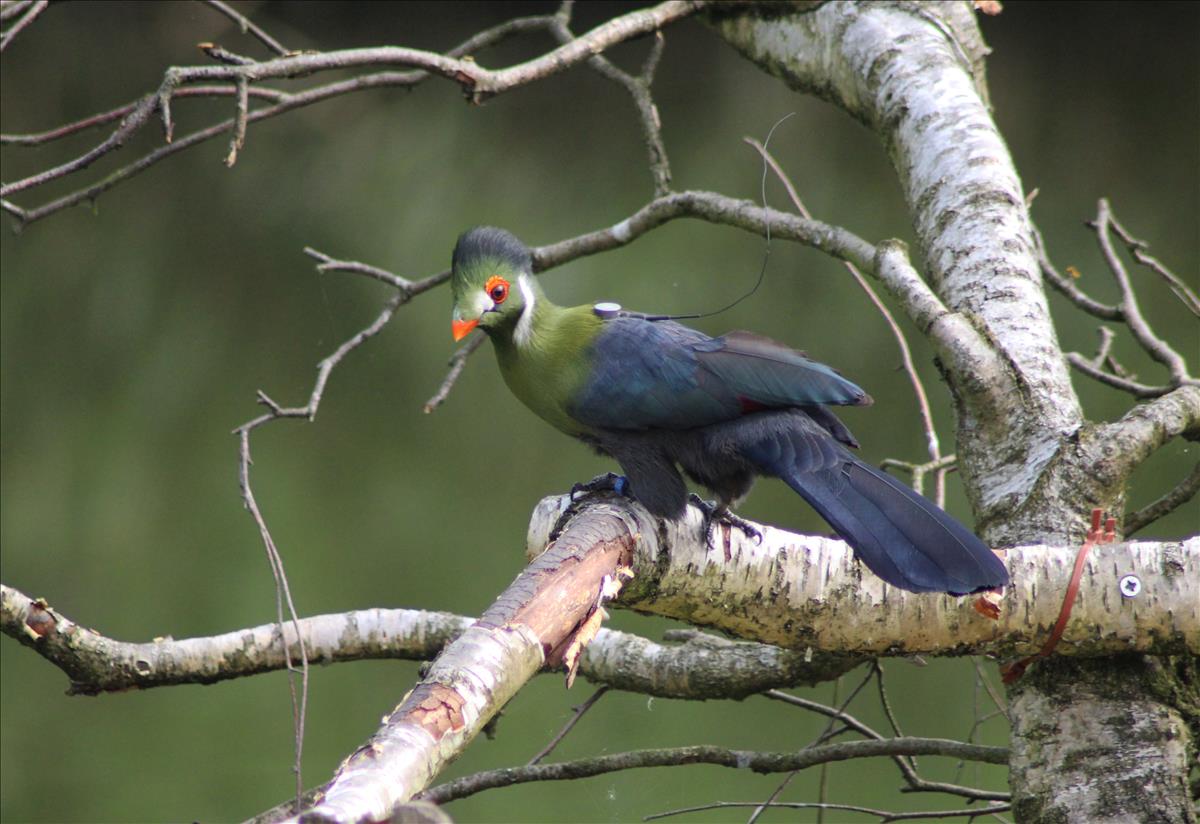 A striking, crested head describes most of the 23 turaco species. On the white-cheeked turaco, the rounded blue-black crest has hairlike feathering which is elongated and slicked back. Prominent red eyerings also stand out. Lacking feathering, they are composed of wattles: a single row of tiny ones below the eye; two or three rows of larger wattles above and to the sides. In front of the eye is a roundish white patch. Below, this patch is bordered by a thin black line which runs from the eye to the gape. A bright orange-red bill has a sharply downcurved tip to the upper mandible. The base of the bill is greyish-green, but is unseen because of forward-facing loral feathers. And finally the feature for which the white-cheeked turaco is named: the white crescent that blazes down the neck.
Other than the above features, the top third of the body is green. This includes the forecrown, face, neck, throat, mantle and breast.

The lower two-thirds is dull and dark. The last third of the body of Tauraco leucotis is bluish-grey. The uppers appear blue with various tinges of glossy green and black. When it spreads its wings to fly however, a brilliant display of red eclipses the drabness. Above and below, the outer secondaries and all primaries except the outermost announce this turaco's presence.

Legs are grayish-black. Toes are semi-zygodactylous. That is, the outer toe is normally at a right angle, but can be switched backwards or forwards. Claws are short and sharply curved. There are two subspecies: T.l. leucotis is described above. T.l. donaldsoni has a crest that is green towards the front and dull crimson at the back. Wings are a dull violet-blue.

T.l. leucotis dwells in the highlands from western Eritrea south through Ethiopia to southeastern Sudan. Its range turns eastward up the Rift Valley and terminates in central Ethiopia. T.l. donaldsoni continues along the slopes on the south side of the Rift Valley to terminate about 300 kilometres from the Gulf of Aden.

Prefers humid montane forest at elevations from 1800 to 3200 metres. They also like trees and bush along rivers down to about 1500 metres. But they have been observed below 850 metres.

Feeds on a variety of fruits and berries, preferring juniper, podocarpus, and fig trees. Insects are eaten for their protein as well as the occasional small lizard.

For a forest turaco like the white-cheeked, breeding occurs in the rainy season. Breeding behavior begins with increased vocalization and chasing from tree to tree. Courtship feeding takes place with the female taking a position slightly below the front of the male. She then turns her head to the side and up. This stimulates the male to feed her regurgitated food.

Two eggs are laid in a thin, fragile nest made of twigs. The pair chooses a forked branch 5 to 20 metres off the ground amidst dense foliage. Incubation, by both sexes, is 21 to 23 days. When incubating, the parents take turns at hourly intervals. As a changeover ritual, the arriving parent will offer a twig, which the sitting parent accepts and places on the nest. Another twig is picked off a nearby branch, offered, accepted and placed. In this way, nearby foliage is soon stripped away.

Hatchlings are covered in thick dark-brown down. Eyes are at least partially open and the young have wing-claws. One parent is always on the nest while the other hunts for food. On day five pinfeathers appear on the wings; day nine on the tail. By day 12, wing feathers start to emerge from their sheaths. At day 20 approximately, the young start wandering around the branches with some difficulty. About the same time, the red flight feathers emerge. The young fledge at about day 25. It takes another five days before they're ready for flight. It is another 18 weeks before full adult plumage is achieved.

Some turacos, including the white-cheeked, have the almost unique ability among all animals to take copper from plants and store it in relatively large amounts. Turacin is the red copper pigment that the white-cheeked turaco stores quite a bit of in its wing plumage. Turacoverdin comprises two green copper pigments found in its feathers. Crown feathering has a reduced number of barbules so that the crest appears like elongated hair. Crests and facial colouring assist turacos in identifying their own species.

Loud calling at dawn is followed by an early departure to their favoured fruit trees. This they do quietly and in single file. White-cheeked turacos are difficult to see as they keep to the base of branches amidst foliage in the treetops. They are quite agile as they leap from branch to branch or run along limbs in pursuit of fruit. They spend time basking and preening in the sun. In the heat of the day, they take time off. In midafternoon, they resume eating. And as the sun nears the horizon, they head back to their roost, which will be in dense foliage.

Pairs are strongly territorial. The male will often chase intruders. Sometimes he approaches an offender, bows low, extends his wings outward and forward, and does a pigeon like whooo call. Tauraco leucotis is sedentary.

Within their distribution area, white-cheeked turacos are widespread and common in suitable habitat. However, as with any forest bird, deforestation is a concern. As well, they are often killed so that their flashy red feathers can become fashion accessories.