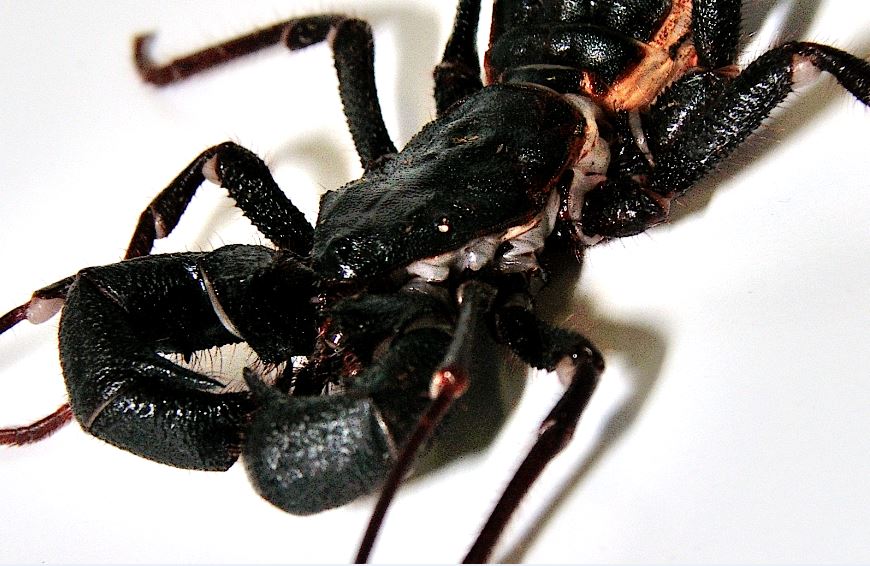 There are at least 140 species of whip scorpions. This species is known as the vinegaroon. It lacks a scorpion’s stinger; in its place is a long, whip-like tail curled forward over its back and used as a sensory organ. It is approximately 75-80 mm in length and may be reddish or brownish black in colour. It has eight eyes; two in the middle, and three on either side of the head. There are four pairs of legs, although the first pair are held forward and are used primarily as sensing organs, similar to the antennae of other arthropods. The chelicerae (mouth parts) are prominent and form pincers used for both food acquisition and defence. Females usually have wider bodies and smaller pedipalps than the males.

Southern and southwestern USA and Mexico.

Vinegaroons are commonly found in oak and scrub habitats. They also occur in desert areas among debris, under rotting wood and logs, as well as in grassland, pine forests, and mountains.

They are carnivores, feeding on arthropods, slugs, and worms. They are known to eat baby vertebrates (lizards and snakes).

During reproduction, the male will deposit a spermatophore (a sperm sac) on the ground before inviting the female over it. The female recovers the sac and the eggs are fertilized. She will then produce 20-35 eggs wrapped in a sac which she carries under her abdomen. As with true scorpions, after the eggs hatch, the colourless offspring will ride on the mother’s back for protection until their first moult.

The vinegaroon gets its name from one of its defence mechanisms. When threatened, it sprays a vinegar-scented, acetic acid mixture from glands located at the base of its telson (or tail). This spray is capable of stinging or burning potential predators.

The vinegaroon is nocturnal and has poor eyesight, despite its eight eyes. It senses vibrations created by the movement of other animals.
It has a hard, protective exoskeleton. The chelicerae (mouth parts) are not only used for catching and eating food but they are also an effective defence mechanism, delivering a painful pinch when necessary.

Enemies include medium sized mammal predators such as raccoons, cacomistle, coatimundi, weasels, skunks, ground birds such as roadrunners, lizards, tarantulas, one another, and possibly scorpions.