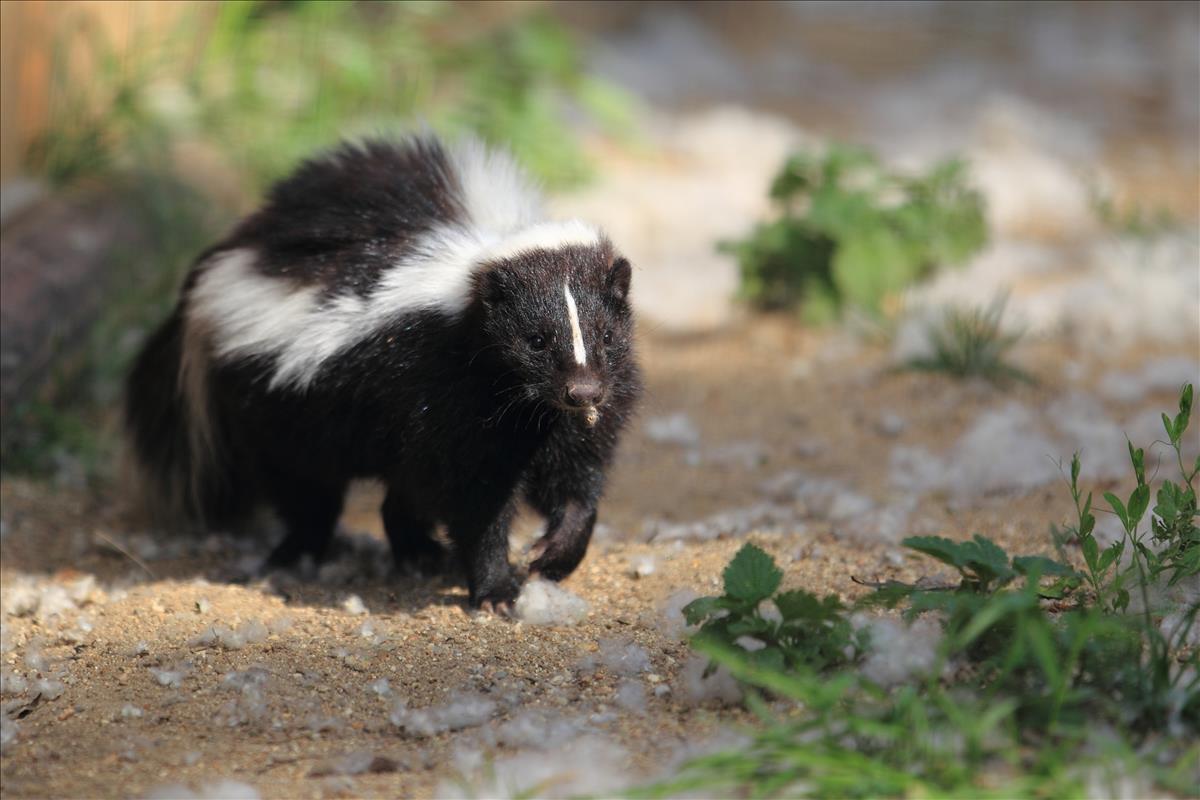 Striped skunks are easily recognized by their characteristic colours and pattern. The fur is black with a white stripe that begins as a triangular shape on the top of the head, forks into two stripes that travel down the sides of the back, and usually merges again near the base of the tail. A thin white stripe runs from the base of the snout, between the eyes, ending on the forehead. Stripe width and length vary with each individual. Stripes sometimes occur on the tail, but more often the tail is composed of intermixed black and white hairs. Striped skunks are about the size of a domestic cat, with small heads, small ears, short legs, and long, fluffy tails. Feet are plantigrade with five partially webbed toes. Claws are longer on the front feet to aid in digging. Males are larger than females.

The whole of Canada (with the exception of the far north and British Columbias West Coast), the United States, and northern Mexico.

Prefers areas of mixed forests, grasslands and open prairie, usually close to water. It is also found in mixed agriculture and tree-cleared areas. Skunks adapt really well and have made towns and cities home. Dens can be found in hollow trees, rock cavities or abandoned animal burrows. In summer, skunks like to den above the ground, but in winter they prefer belowground where it is warmer. Sometimes, several animals den together throughout the cold months.

Omnivorous (eats both vegetables and meat). The diet consists of rodents and other small mammals along with insects, grasses, leaves, buds, grains, nuts, carrion, and mollusks. They also eat birds eggs and nestlings.

Skunks typically mate in early spring and are polygynous, meaning that (successful) males seek to mate with more than one female. When encountering an estrous female, a male will approach her from the rear and then smell and lick the vulva area. The male grasps the female by the nape, followed by mounting and copulation. The males defend harems of females. Once a female is impregnated, she fights off any male that tries to mount her. However, females that lose their litters may mate again. Before giving birth, the female excavates a den to house her litter of four to eight kits. She gives birth after a gestation period of about 66 days.

When born, skunk kits are blind, deaf, and covered in a soft layer of fur. By eight days, the youngs musk odour can be emitted. By 22 days, their eyes open. The kits are weaned for about two months after birth. Generally, they stay with their mother until they are ready to mate at about one year of age. The mother is very protective of her kits and often sprays at any sign of danger. The male plays no part in raising the young. The young remain with the mother all summer, foraging with her until autumn, when some of them disperse. Lifespan is four years in the wild and up to six years or more in captivity.

All mustelids have anal musk glands that are used to express aggression or displeasure, but skunks have developed this capacity to the extreme. The musk glands of the striped skunk, about the size of a grape, are surrounded by powerful sphincter muscles. When the animal is annoyed or frightened, those muscles force the fluid musk down a duct and out through a kind of nipple protruding from the anus. With considerable muscular control over the spray, the skunk is able to produce a fine cloud of mist or to direct a concentrated stream of spray on animals as far away as 4.8 metres. At distances of 1.8 metres to 3.1 metres, their aim is accurate enough to hit most large mammals.
The musk gland contains about 28.4 ml of an oily sulphur-alcohol solution called butyl mercaptan, enough to produce half a dozen sprays. When ingested, the musk poisons the nervous system, and can cause death. As an external spray however, it is only temporary, although intensely nauseating and irritating. Temporary blinding can also occur. Skunks are not immune to their own spray and try to avoid spraying if they are likely to be soiled. The high physiological cost of manufacturing the musk also makes them hesitant to spray.
Skunks have evolved a very conspicuous black and white colouring to deter their enemies. They use a wide range of behavioral threats to frighten predators before resorting to the spray. They arch their back and walk toward the intruder. They hiss, click their teeth, stamp their front feet, and do headstands with the tail raised in a very clear warning posture. Some skunks can spray from a headstand position, but the striped skunk bends its body into a U-shape with head and anus pointed in the same direction.

The skunk is normally active at night searching for food with its keen sense of smell. At sunrise, it retires to its den. While the male dens by itself, several females may live together. The striped skunk does not hibernate, but instead goes into a dormant or semiactive state.

Skunks are predated upon by the great horned owl.