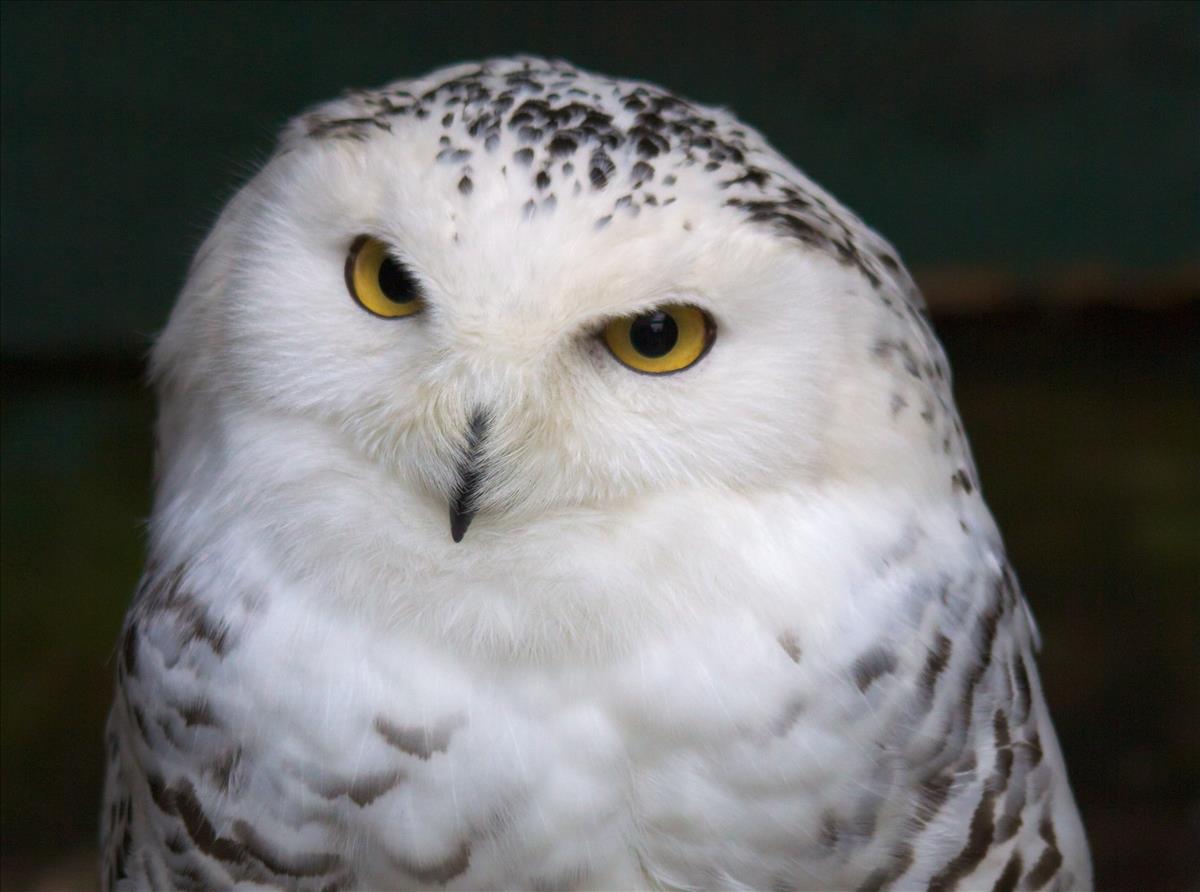 It is the heaviest North American owl, and one of the largest in overall size. As with most owls, the females are slightly larger. Weight: female average 2.3 kg, male average 1.8 kg. Height: 52 to 70 cm. Wingspan: 125 to 145 cm. They have large, round heads, black beaks, yellow eyes, and no visible ear-tufts. The talons are 25 to 35 mm long.

The feathers of adult males may be almost pure white in colour. Adult females are mostly white, their feathers being barred with dark brown. First-year birds of both sexes are darkly marked. Immature males resemble adult females. Immature females are heavily barred, appearing almost grey from a distance.

This owl is a large carnivorous bird of the Arctic regions of the world. They occur in Asia, Europe, Greenland, and North America.

In the breeding season they are typically found in areas of tundra across the Northern Hemisphere. In North America, they nest north of the tree line in the high Arctic from Alaska to Labrador. The Canadian summer breeding range includes the islands of the Arctic Archipelago, from Ellesmere Island in the north, to Baffin Island in the east, to Banks Island in the west, and along the northern coast of the continent from the Yukon Territory to Labrador. Some snowy owls over winter in the same areas where they nest, while others migrate south. Migratory snowy owls spend the winter in areas of North America similar to their summer habitat. These include prairies, marshes, open fields, or shorelines; all resembling the treeless tundra.

They are raptors and prey primarily on lemmings, mice, and voles. Rabbits and other small mammals are also consumed as well as other birds, fish, and even insects. Being opportunistic and patient hunters they will wait for, or grab at, anything which comes close enough to catch. Small prey items are swallowed whole. Stomach juices digest the flesh, but indigestible bones, teeth, fur, and feathers are compacted into pellets and regurgitated. Prey is grabbed by their claws and small items may be carried in the beak.

Upon return to their breeding grounds males begin to court the females. He performs display flights, ground displays, and frequently carries a dead lemming to further impress his female of choice. Once paired mating takes place, she scrapes out a nest, which is a simple shallow depression. Clutch size is variable, depending on the availability of prey items. When food is plentiful they lay large clutches, with as many as 11 or 12 eggs. If food is less plentiful clutch size may drop to four to seven eggs. When local lemming populations crash they may not nest at all, or may move to another area. Eggs are laid at intervals of every second day. The female incubates the eggs and this begins with the first egg laid and lasts from 32 to 34 days. She also broods the newly hatched young, while the temperatures are usually below freezing, and she must perform these duties almost continuously. Throughout this time the male provides food for his mate as well as most of the food for his developing chicks. Newly hatched chicks are covered with white down and they quickly grow an additional coat of dark grey down. They leave the nest when three to four weeks old but cannot yet fly.

Remaining in the general area adjacent to the nest they continue to be fed by their parents. They have voracious appetites and growth is rapid. Snowy owl parents are very protective of their offspring from the egg to the time they become independent. Fledging occurs at seven to eight weeks of age and by this time they have immature plumage and are now hunting for themselves. Parents continue to care for them for a few months. As summer approaches its end most young birds will start their first migration. Young owls, especially males get whiter as they get older, while females never become totally white. They are able to breed at two years of age, and can live to at least ten years in the wild.

This owl has many hunting strategies, including swooping onto prey from a perch, taking birds in the air or from the surface of water, and snatching prey while walking on the ground. It frequently perches in silence and patiently waits without moving for prey to appear. They have keen eyesight and acute hearing. Owls have binocular vision with the fields of vision overlapping and providing excellent judgment of distances. They can see in all directions by completing a three-quarter turn of the head without moving the body. Their eyes contain more light-gathering cells than human eyes and they are able to detect small objects far away. They are surrounded by disks of stiff feathers that reflect sound waves to the ear openings, enabling them to detect prey hidden under thick vegetation or snow cover. Unlike other owls they are not nocturnal; these owls hunt during daylight and darkness. Daylight is almost continuous within the Arctic Circle.

They are territorial and will defend their nests against all comers – even wolves. A means of defense against intruders is to act as if wounded by dragging a wing and luring the predator away from its nest. They have no fixed attachment to a breeding area and will nest wherever food is abundant. A dense layer of down, overlaid with thick feathers insulates the body, including the legs and toes. Owls living in colder higher latitudes have more heavily feathered legs and toes.

The biggest threat to snowy owls is global warming. Changing Arctic climate conditions may affect the breeding of lemmings and consequently their food supply. They have only a few natural predators. Mainly young birds are at risk from Arctic fox and gulls. Adult owls are at risk when they migrate south from a variety of circumstances relating to human intrusion and development, affecting habitats and migratory routes.