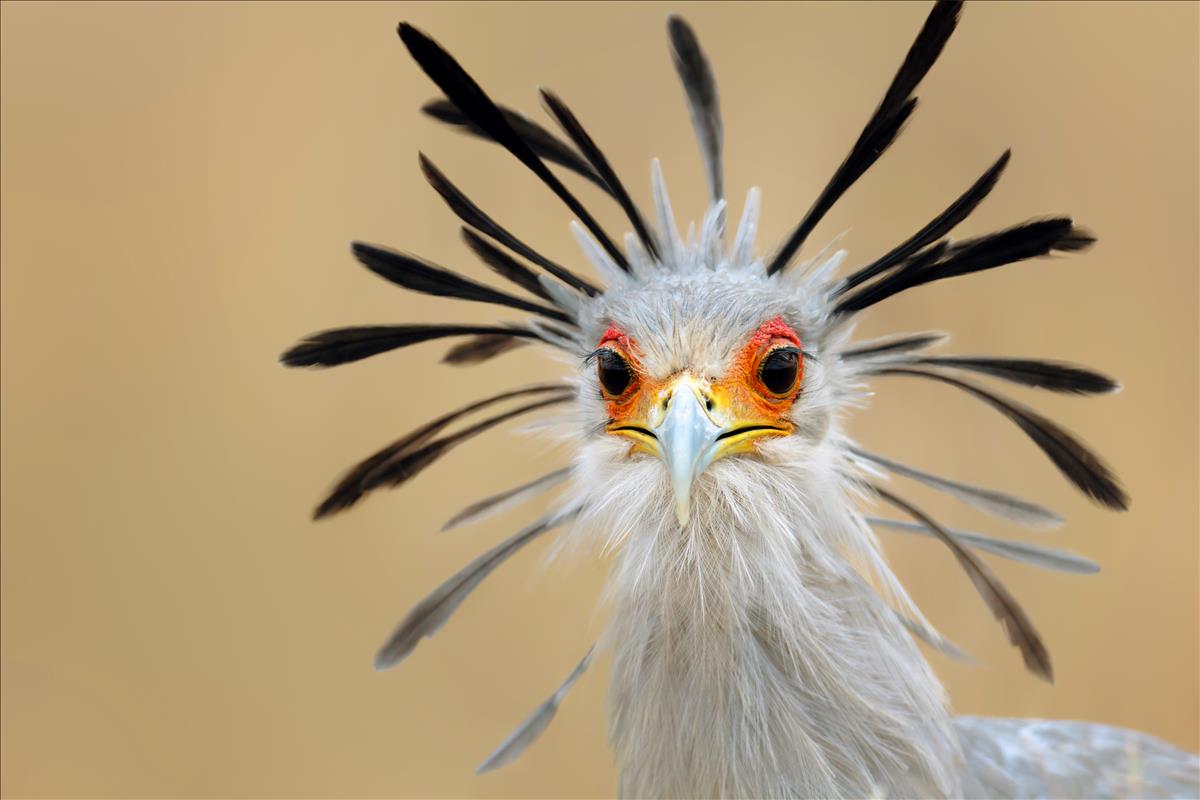 Secretary birds are long-legged terrestrial birds of prey, resembling a crane. Male and female look alike, with grey plumage on the wings and back, and off-white to grey underparts. They have pale grey tail feathers, with two very long central tail feathers tipped in black and white making the tail wedge-shaped. Their flight feathers are black and there is a very identifiable erectile crest of black tipped feathers on their head. They have short, stubby toes on their long, powerful, stork-like legs with black thigh feathers - looking rather like boots. There is bare skin on their faces around the eyes ranging in colour from red to yellow to orange. They have the hooked beak of a raptor.

Sub-Saharan Africa. These are non-migrant birds.

Open areas, such as savannas, grasslands, scrub, or grain fields.

Secretary birds are monogamous and are thought to pair for life. In courtship, they give a croaking call while displaying in the air and on the ground. Aerial displays consist of high soaring and diving performed by a single individual (usually the male), or by the pair when the male will dive toward the female and she will half-turn to present her claws. This courtship behavior is very similar to that of other birds of prey. On the ground, their displays are very crane-like with the two birds dancing around with their wings outstretched. Sometimes small groups of secretary birds will all join in this ground display behavior. After courtship displays, mating will usually take place on the ground, although some pairs mate in trees.

Pairs build large stick nests in the tops of isolated low thorny trees, like acacia. These flat nests are lined with grass and may be used for several years. Two or three greenish-white eggs are laid and incubated by both parents for 45 days. Both male and female secretary birds invest heavily in the care of their young. After the eggs hatch, parental care is constant.

Chicks are downy and helpless, getting feathers at about 30 days and fledging at 60 - 70 days. There is no competition between chicks and often two young are raised. Both the male and female feed the young via regurgitation, although the female mostly regurgitates food that the male has brought back to the nest for her. The young are fed pre-digested insects in a regurgitated liquid form. Since secretary birds have short toes, they cannot carry prey to their young in their feet, but instead bring all the food in their crops. Snakes are brought to the nest for young birds, but the parent pulls the heads off the snakes before feeding them to the young. When the chicks fledge and leave the nest, the parents will teach the chicks how to hunt for prey. Once the offspring know how to provide for themselves and are independent, they generally head off on their own, leaving the parents’ territory.

Secretary birds are diurnal, active during the daylight hours. They are majestic walkers seen often early in the morning. When hunting, they can walk up to 24 km daily through the grasslands looking for prey. They nod their heads back and forth as they go, and stamp their feet repeatedly on the grass for up to 30 seconds at a time. This flushes out the prey which the bird then chases down with the aid of its powerful legs. It is able to catch the moving prey, hitting it with its strong feet and striking out with its hooked beak. When the secretary bird is hunting snakes it uses its wings as shields and attacks the snakes by punching them violently with their fisted feet.

Some pairs remain resident and defend large territories aggressively. Others become nomadic and follow insect or rodent plagues. Secretary birds are good flyers and if disturbed will run and glide on open wings. They soar like eagles or vultures, mainly in nuptial displays, but sometimes just to move around. They can reach altitudes of 3650 metres.

Secretary birds are generally only vulnerable to predation as eggs and young birds in the nest. Their large, open nests leave the nestlings vulnerable to predation by crows, ravens, ground hornbills, and birds of prey, such as kites or eagle-owls. They are threatened to some degree by people who can easily reach their nests to rob them of their eggs.