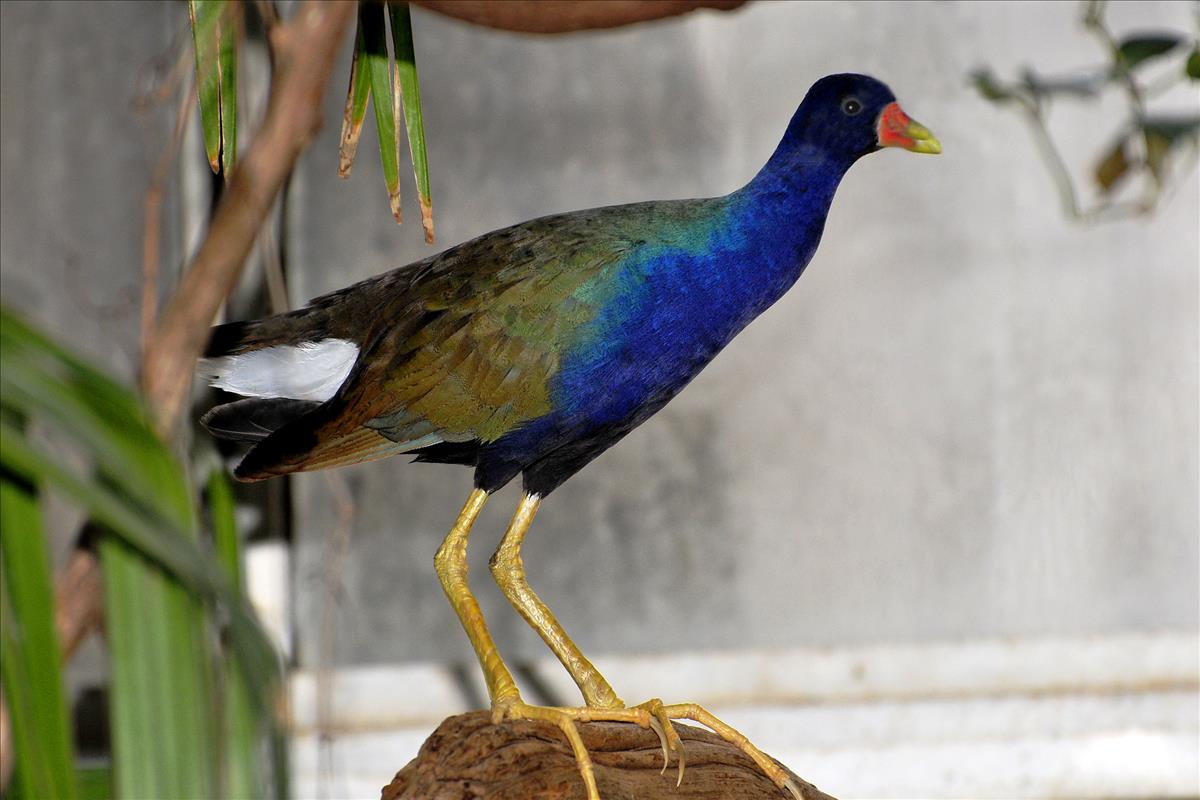 The male and female are similarly built and coloured; a pale blue frontal shield with a thick bill, coloured red with a yellow tip. Head, neck and under parts are a brilliant bluish purple, almost iridescent. The back and wings are a bronze green with white tail coverts. The legs with exceptionally long toes are bright yellow. The female is smaller. Males weigh 203 - 305 g where as females weigh 141 – 291 g. They have a length of 27 - 36 cm and a wingspan of 50 - 55 cm.

Found in the South Atlantic and Gulf states of the USA, as far north as Maine, New York and Wisconsin and further south to the West Indies, Central America into north South America i.e. Brazil.

They inhabit the coastal fringes of their territory in both the USA and in the subtropical and tropical areas, in lush wetlands, grass covered marshes, overgrown swamps, ponds, and slow moving channels of water and ditches.

In North America, they breed from May to August whereas, in Central and South America and the West Indies, this period is extended from March to November. The purple gallinule is monogamous and very territorial during the breeding season. Both male and female build a bulky nest from available plant material on mats of floating vegetation which may be water hyacinth, alligator weed, cut grass, or wild rice. The nest measures 28 cm across and often has a canopy for the protection of the young birds and a ramp for easy access. The number of eggs average six to seven. They are cream to buff coloured spotted with brown or a pale purple. Incubation takes 18 to 20 days. The parents feed them for about a week, after that, they feed themselves. The chicks are a buff-brown colour with an olive back, greenish wings, a dark brown forehead and a dark olive bill. Their legs and feet are a dull olive colour. The all white under tail coverts is conspicuous in all ages. They are capable of flight in five to seven weeks.

The purple gallinule walks across floating vegetation to feed, turning over lily pads to find food underneath. This bird swims and dives easily but stays away from open water in fear of predators. They climb without difficulty into bushes and trees quite high off the ground and have an affinity for rice fields. They are opportunistic feeders raiding cultivated gardens and picking up food discarded by humans.

Although there are no exact statistics as to the number of purple gallinules in existence, they are not considered threatened. However, since these birds are totally dependant on wetlands, the continuing destruction of these habitats will eventually affect the future of these birds.