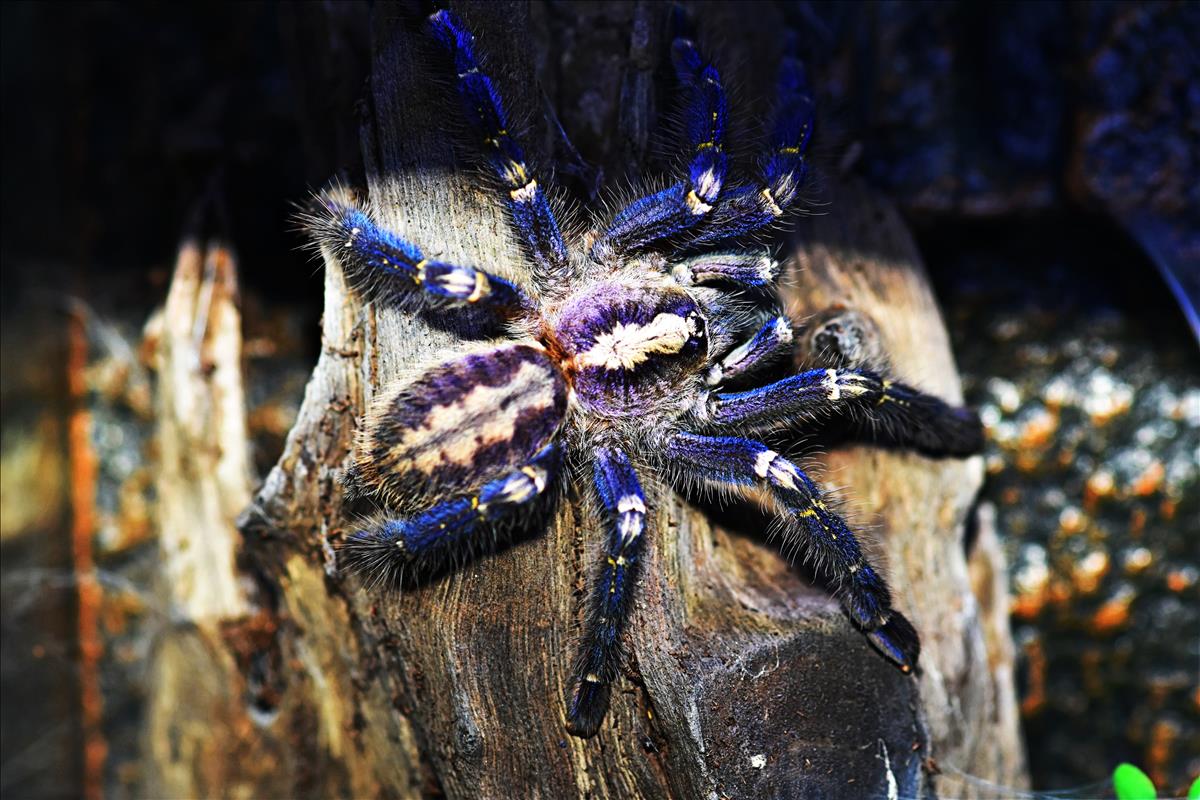 The ornamental tree spider is an elongated species. The females are silvery-grey, while the males tend to have a brownish colour. Both sexes have a complex pattern of white and black stripes and chevrons. All have bright yellow “warning” bands under their front legs. These spots can best be seen if the spider is cornered and frightened, for that is when it will raise its legs in a defence posture. As well, both males and females have a broad white-beige band across the front end of their abdomens. Mature males are slender and long-legged when compared to females. They average 18 cm in length, females may reach 22cm. After reaching maturity, females live considerably longer than males (up to twelve- compared to the males’ three year life span).

They live in climates that are hot and humid with seasonal variations. In the wild P. regalis lives in holes found in tall trees located in either forests or plantations. They spin funnel webs that are not symmetrical. These webs are not used to catch their prey.

Their primary prey mainly consists of various flying insects, which they catch manually (they are very fast spiders) and paralyze with one of the strongest venoms possessed by any other tarantula species. They will also eat small lizards, mice and other vertebrates.

Breeding time is dangerous for male ornamental spiders. Unlike other tarantula species, these males have no hooks on their front legs that can be used to catch and immobilize the females’ fangs. As a result, many are killed and eaten by the females before mating occurs. Males make their presence know by “drumming” with their front legs. Females will drum in response to indicate that they are also ready to mate. The egg sacs of ornamental tree spiders can contain as many as 200 eggs; however the average number is considerably less, usually between 35 to 70 eggs. The young grow quickly and, as long as the food supply is plentiful, can live communally.

These spiders are very fast, and their venom is very potent. Strong, quick-acting venom helps to ensure that the prey is quickly immobilized, and cannot escape. The yellow bands on the undersides of their front legs act as warnings, and they tend to startle would-be attackers.

The main threat to P. regalis is loss, fragmentation and degradation of their habitat.