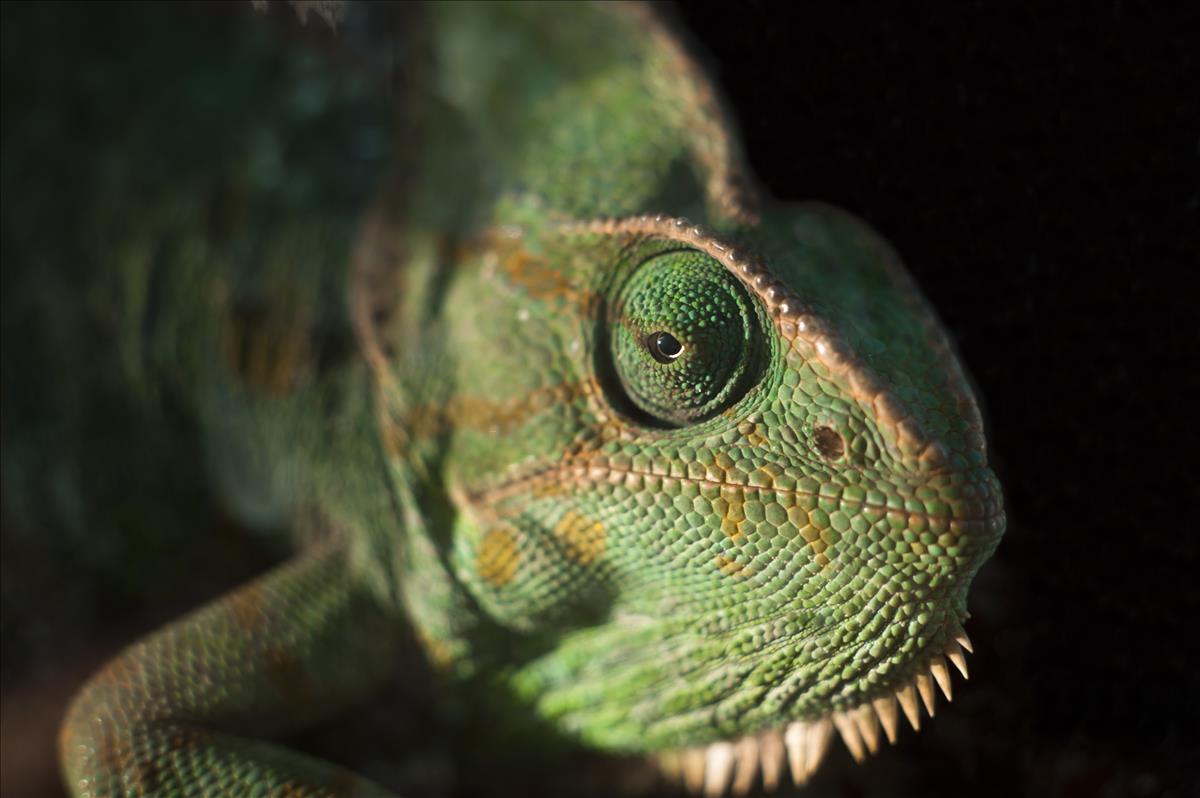 Meller’s chameleon, the largest chameleon on mainland Africa, can grow up to 60 cm. Females are slightly smaller with a less prominent helmet and dorsal crest, and the male has a swollen bulge at the base of his tail which houses the hemipenes. The sexes are similar in all other respects. When this lizard is at rest, its colouring is deep to lime green with yellow stripes splashing down its flanks with random black spots scattered over it. The body is slightly compressed vertically and is covered by heterogeneous scales both large and small. Those at the throat run in horizontal lines. Although there is no gular (throat) crest, the neck is thick. The head, large in relation to the rest of the body, can be as long as 7 cm, and tapers toward the snout.

The moderately sized, helmet (casque) stands upright at the back of the skull. Immediately behind this are two large occipital lobes. A ridge of large scales (the medial crest) flows over the edge of this helmet and continues down the face to the top of the mouth. Also, a ridge of scales (preorbitals) begins above each eye and descends down the face to the snout. A small, stubby, protuberance or horn extends from the upper lip.

The eyes are raised, and sit in turret-shaped eyelids with large beaded scales at their base. They move independently and can see around the body in a complete arc. The lids do not close entirely and the pupil is visible through this opening (turret hole). There are no external ears. The interior of the mouth is yellowish-tan in color.

In place of teeth a bony ridge covers the gums. The tongue, a blob of flesh, sticky and concave at its tip, fills the entire mouth and is connected to the throat by coiled accelerator muscles. When extended, it can reach 50 cm. The dorsal crest undulates down the ridge of the spine and the length of the tail which is stubby and about one-third the length of the body. The legs have five opposable digits wrapped in two fleshy bundles, two fingers on the outside of the forelimbs and three on the inside (zygodactylism); on the rear limbs the arrangement is reversed. From each digit a short sharp claw emerges through the skin.

These lizards are found on tropical grasslands and in the treetops of bush land savanna.

Because Meller’s newborns are big, relative to other chameleon species, they progress to eating large prey quickly. Hatchlings begin with small insects, flies, bugs, and worms. As adults they consume locusts, cockroaches, spiders, small lizards, and hatchling birds: anything that moves and is the right size. This lizard is also known as “the bird eating chameleon”. They are carnivorous.

Meller’s chameleons are extremely territorial, and at breeding times the males are especially pugnacious. Females who have already mated (gravid) and those not interested in breeding will turn black with cream and grey colouring, hiss, and rise on their rear limbs when approached. Males also attempt to ward off rivals with an aggressive display. They turn deep green mottled with black, roll their eyes and move with a staggered gait. When males are intimidated or refused by females, they will show dark submissive coloring and move away. Males will flush red in order to entice females. Consenting females will at first show disinterest and move away but will then be receptive. She indicates this with a display of brilliant yellow, blacks and creams. He will raise his occipital flaps, flair his throat, and advance with an unsteady gait. Males will also roll their eyes, and display a gaped mouth while moving his tail, swaying from side to side. He climbs onto her back and she moves her tail aside letting him insert one of his hemipenes.

Intercourse lasts a varying length of time, from a brief encounter to 15 or 20 minutes. She then moves off and may mate several times over the next few days. Females are capable of delayed fertilization (storing viable sperm) and can, from one mating, lay multiple clutches of approx. 50 - 90 eggs over a year. She may sometimes mate twice in twelve months. Eggs, 1.5-2 cm long, white and oval, gestate from three to six weeks and are then deposited in a ground nest 20-30 cm deep and covered. There is no further maternal involvement. Incubation lasts from four to five months depending on temperature and humidity. The newborns free themselves from the shell using an egg tooth. These young are the same colour as their parents. Moving quickly into the trees, hatchlings begin to search for food. They are very vulnerable to predation, but if they survive, life expectancy can be approx. 12 years.

Because Meller’s chameleons live a solitary life style, move slowly and are incapable of loud vocal communication, they have developed a system of signaling to each other with swift colour and pattern changes. Like other chameleons, this lizard shares information about mood, wellness, nutrition, reproductive status, body temperature, territorial disputes, and readiness to fight or submit. Light levels, the season and the time of day will also effect changes in colour. It is the at rest colouring that is used for camouflage. The epidermal layer of the chameleon is transparent and is sloughed off in patches as the lizard grows. The top layer of permanent skin contains colour cells (chromatophores) that can create red and yellow. Beneath this are blue and white reflector cells and the deepest of the three produces deep brown and black pigments. Chromatophores are activated by brain impulses. Their ability to create various shades, colours and patterns is accomplished by muscles attached to them that, by pulling on them, change their shape, allowing colours to blend together. Every species of chameleon understands only its own coded colours.

Meller’s chameleons cannot run from threats so they place objects between themselves and danger (shadowing) and remain still. Remaining motionless for long periods enables them to stay safe. Their swiveling, turret eyes, make them aware of their surroundings but they are deaf to sound. A double lens in each eye lets them judge distance and, when used binocularly, they can focus on prey with great accuracy. By using its projectile tongue attached to a jointed bone in the head (the hyoid) and powerful accelerator muscles, it has become an adroit hunter. Since Meller’s chameleon is arboreal, its opposable toes and fingers, sharp claws, vertical legs, and their prehensile tail give them balance, maneuverability and sure-footedness permitting it to climb, perch, dig, and remain stationary on narrow limbs.

Meller’s chameleon has adapted to a very specific environmental niche and cannot respond to change or move away quickly. Human activity is encroaching upon its habitat, altering and degrading it. Because of its large size and handsome appearance, although it is illegal to do so, the pet trade seeks out this species. However, it is extremely susceptible to stress and many do not survive being transported.