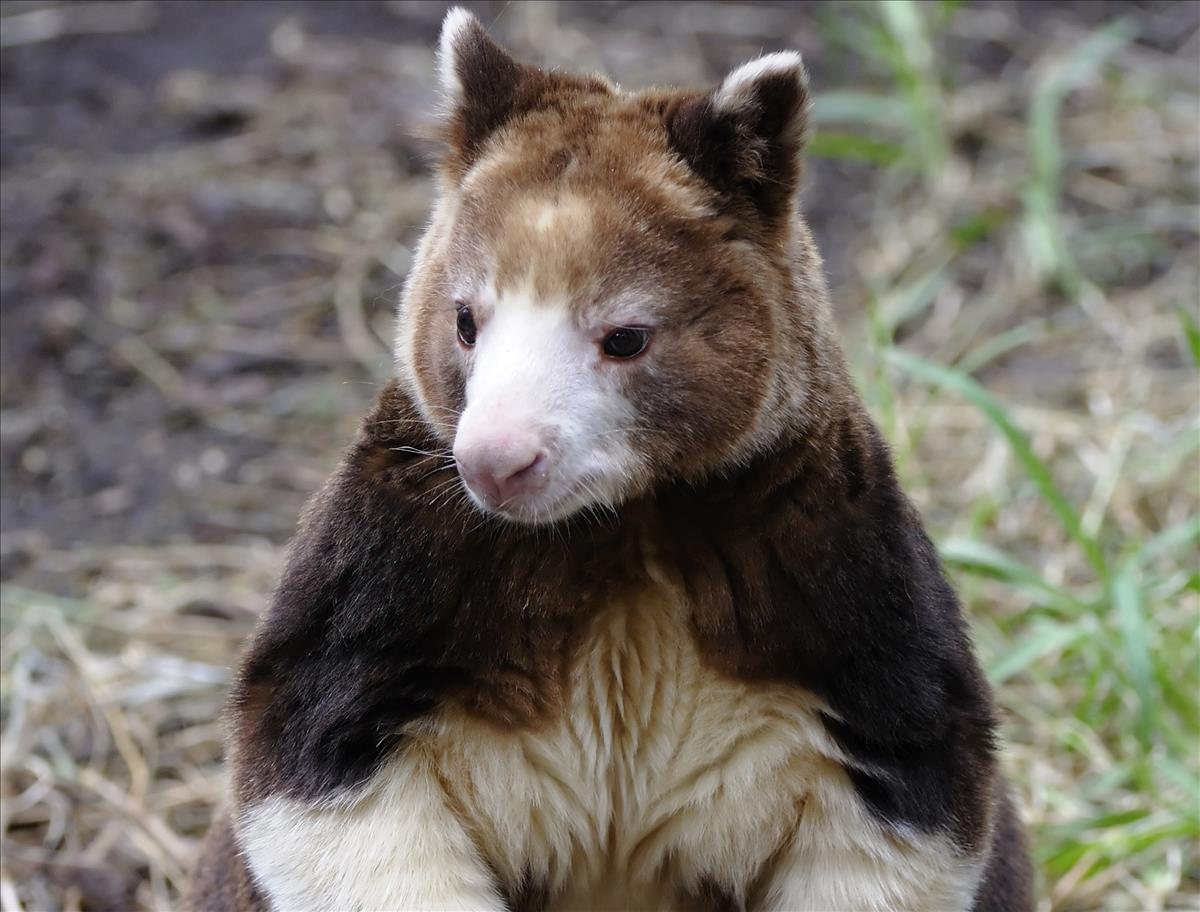 Matschie’s tree kangaroos have thick, dense fur that is mahogany-coloured or red on the back, and bright yellow on the limbs, feet, tail, and edges of the ears. The face is yellow and white. A dark stripe runs down the back. The body is short and stocky, only 50 - 76 cm in length, with a tail 42 - 93 cm long. The furry, cylindrical tail is not used for grasping (non-prehensile), but rather for balance while leaping among the tree branches where it is normally found. The tree kangaroo’s forelimbs are muscular and similar in length to the hind limbs, unlike ground-dwelling kangaroos. In addition, the feet are shorter and broader than those of ground-dwelling kangaroos, and all four have curved claws used for climbing. The feet lack opposable thumbs. Pads of roughened skin on the feet aid with gripping. The eyes are large, but the ears are small, although larger than those of other tree kangaroo species.

This species is restricted to the high elevations of the Huon Peninsula on the island of Papua New Guinea as well as on the nearby island of Umboi where they were almost certainly introduced by man.

Matschie’s tree kangaroos are arboreal, spending nearly all of their time in the trees. They are found in the mountainous tropical deciduous and tropical rainforests at 900 - 1500 m above sea level.

They are considered herbivores, although they will feed upon animals such as young birds and insects. The main part of their diet consists of leaves, but they will also feed upon flowers, fruit, nuts, bark, and sap.

Matschie’s tree kangaroos have no defined mating season and females go into heat every 51 - 79 days. They are solitary creatures and only come together to mate. After a gestation period of 39 - 45 days, the longest of any known marsupial, the undeveloped joey is born at only 2.5 cm in length. It must climb up the mother’s belly, into her pouch and locate a teat. The joey remains dependent on the mother and her pouch for nearly a year, only venturing out of the pouch for brief periods beginning at about 300 days after birth.

All kangaroos are believed to have evolved from small arboreal marsupials that descended to the ground and evolved bodies that were able to move rapidly over the earth. Why the ancestors of the tree-kangaroos returned to the trees is probably related to changes in the topography when open ground became scarce. Those who were able to live in trees were naturally selected to survive.

On the ground, tree-kangaroos are slow and clumsy, but in the trees they are bold and agile, leaping from branch to branch. They can jump to the ground from remarkable heights without injury. They have strong forelimbs for climbing, powerful hind legs for hopping upwards and long tails for balance. Thick fur on the back of the neck grows in a reverse direction so that water will shed easily when the animal is sitting (typically it sits with its head lower than it’s shoulders).

The tree-kangaroos teeth are adapted for tearing leaves rather than cutting grass. Bacteria in their large stomach help to break down the fibrous leaves during digestion.

Matschie’s tree-kangaroo are threatened by over hunting for food by the natives of Papua New Guinea. They are also threatened by habitat loss due to farming, logging, mining, and oil and gas production.