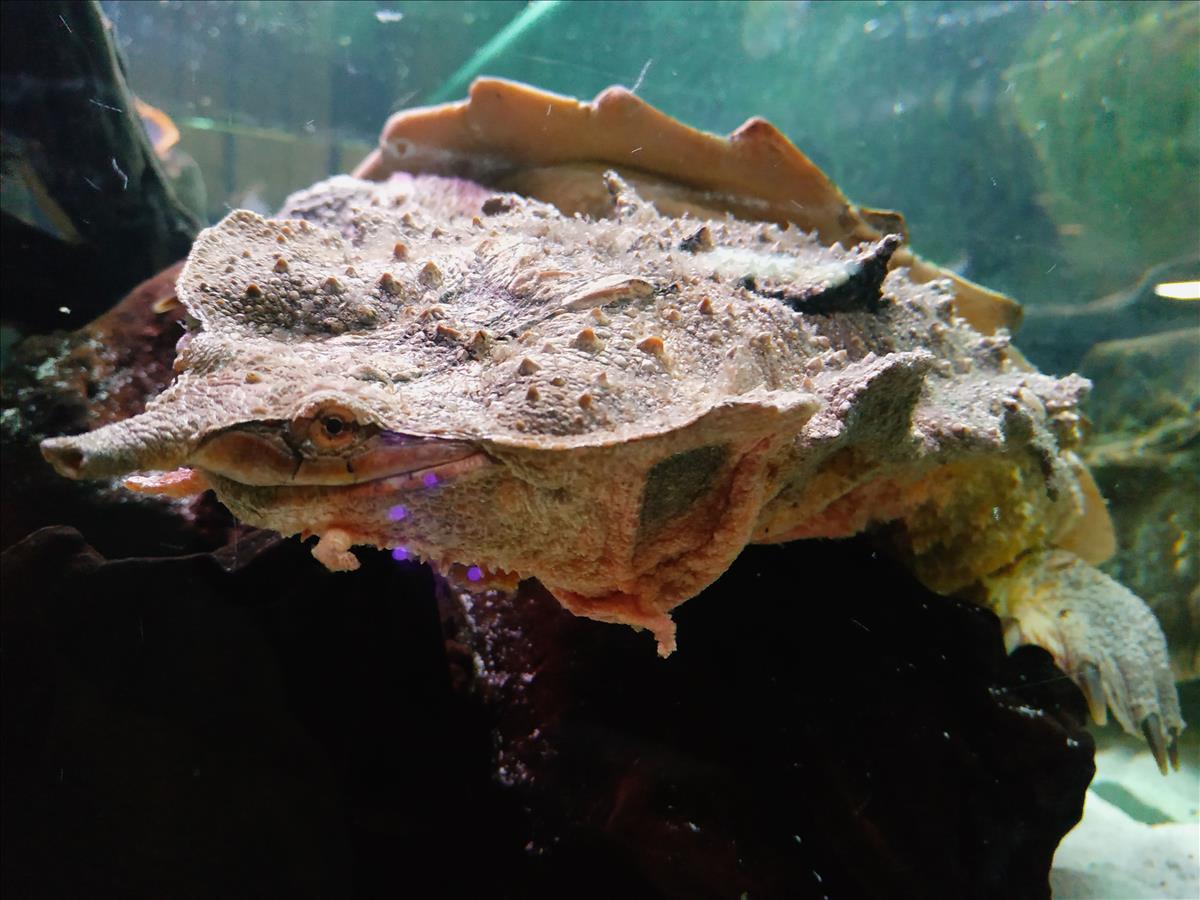 This is a large (up to 45 cm in length, and 15 kg in weight), very flat turtle. The carapace is exceedingly rough with longitudinal rows of pyramidal scutes. Its head is large, flat and triangular, and it ends in a long flexible nasal extension (snout). It has a very wide mouth. The eyes are small and located close to the snorkel-like snout. The neck is thick, elongated and fringed at the sides.

Adults display sexual dimorphism (the sexes differ in appearance). Mature males have a concave plastron (bottom shell) and rather long, thick tails; females have a flatter plastron and smaller tails. The carapace (the upper section of the shell) and neck range from a dark brown to mahogany in colour. The plastron of the adult is yellow and brown. Hatchlings are more brightly coloured than the adults.

The family Chelidae is comprised of side or snake-necked turtles. In the case of the mata mata, the neck is longer than the backbone within the shell. Unlike most other chelonians whose necks are withdrawn into the carapace in a vertical S-curve, the mata mata and other chelidae, retracts its neck in a horizontal S-curve.

They live on the bottom, in the shallow areas of muddy, slow-moving bodies of water such as rivers, swamps and marshes.

Mata matas feed primarily, upon live fish. In addition, they will eat amphibians, invertebrates (such as insects and crustaceans), small mammals, and birds.

Prior to mating, the courting male turtle will extend its head towards the female while opening and closing its mouth. After mating (normally from October to December), the female excavates a nest and deposits from one to two dozen eggs in it. She does not guard the nest. Unlike most reptiles (whose eggs are soft and leathery) the mata mata’s eggs have brittle shells. They are almost round and are about 3.5 cm in diameter. The incubation time is approximately 200 days. Nesting takes place in October in Amazonia and Colombia.

The snorkel-like snout allows this turtle to lie fully submerged while breathing, with the least possible disturbance of the water surface.
Despite the presence of "tapetum lucidum" (a visual adaptation in the eyes which assists the collection of light), these turtles have poor vision. However they do have excellent tactile and auditory senses. The complex folds of skin on their bodies hold sensory nerves that help to detect motion, and there is a well developed tympanum on both sides of the head. As well, the neck is innervated and is sensitive to pressure waves, which enables it to detect the presence of approaching fish.

The mata mata lays on the bottom of shallow rivers, moving so little that a thick growth of algae forms on its rough shell. Its neck fringes along with the algae growth provide a near perfect camouflage. Prey approach in search of food and are captured in a unique fashion; the mata mata opens its mouth at such a great speed that there is an inrush of water that also sucks in the fish. The jaws close, the water is expelled and the fish is swallowed.
Camouflage, as well as having a hard shell serves to protect the turtle from potential predators.

Habitat degradation and capture for the pet trade could prove to be future causes for concern.