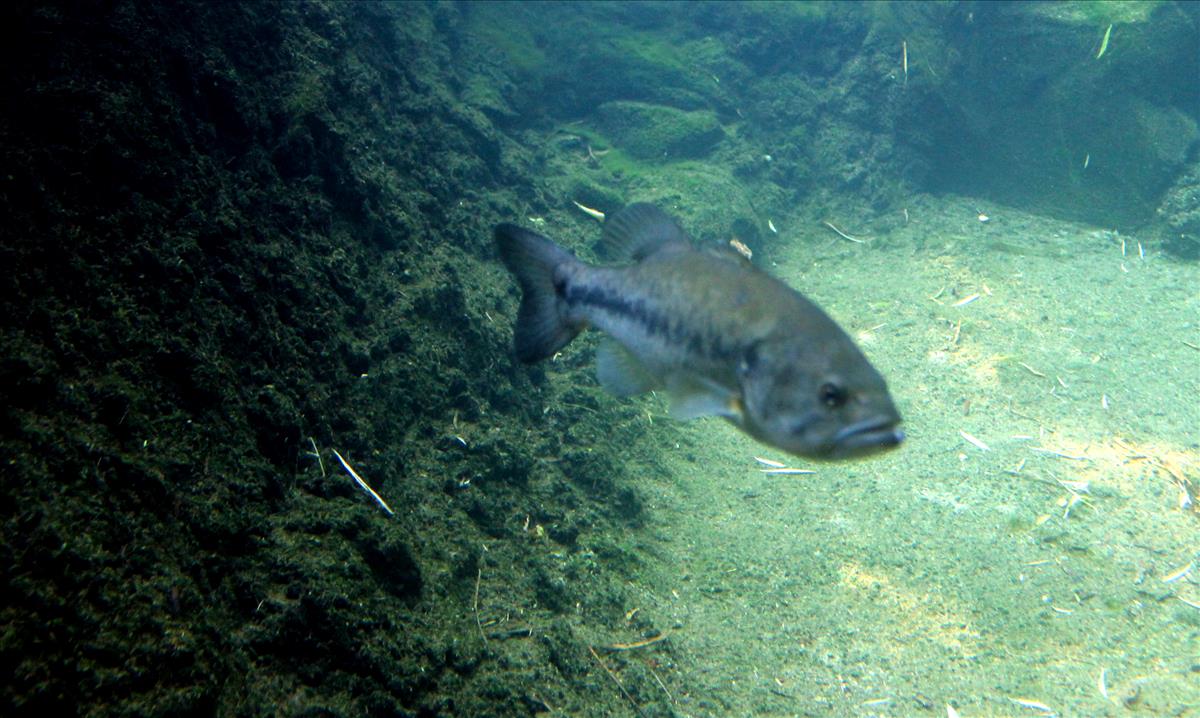 The robust body is mostly greenish with dark green or brown mottles on the back and sides. The belly is off-white. The dark lateral streak running the length of the body, the large mouth and the upper jaw that extends back beyond the eye is very species specific for identification purposes. These features can be used to distinguish largemouth bass from the smallmouth bass. The dorsal fin has a deep notch separating nine spines from 12 to 13 soft rays. In warmer southern habitats, largemouth bass reach their greatest maximum size, up to 9 kg. Maximum weight for more northern regions is four to five kg. Adult length is 25 to 55 cm with a maximum of 97 cm.

The native range includes the St. Lawrence River, Great Lakes, eastern North America, the Mississippi River system, Florida and northeastern Mexico. This fish has been introduced throughout the lower states of the United States and Hawaii, as well as into Europe, South America, Southeast Asia, and Africa as a sport fish.

Freshwater – temperate. It is found in many shallow freshwater habitats. They prefer clear, still or slow moving water, such as slow moving streams, rivers and lakes with abundant aquatic vegetation.

The young of this species feed on insects and other invertebrates. Once they reach about 3 cm in length they begin to actively hunt smaller fish. Adults eat smaller fish, including their own kind, frogs, insects, crayfish, and even mice and ducklings.

Spawning takes place in the spring when water temperatures reach about 15¢ªC. The male becomes aggressive and stops eating. He clears a nest on the bottom in shallow water. Females are attracted to the site and deposit 1,000 to 25,000 eggs in the nest. Females may deposit eggs in several different nests. Once mating is complete the male chases off the female and any other intruders and remains to defend and fan the eggs. The eggs hatch in three to six days and the young fry may be protected by the male for another two to three weeks. Young fish usually school together. After one year they may reach 10 to 15 cm, up to 20 cm in their second year and 30 cm in their third year. Largemouth bass are mature at 3-4 years, but in ideal habitat may mate at two years of age. Adult fish are usually solitary and the average life span is 16 years.

Adult fish tend to shelter near sunken logs, rocky debris or man made objects. Largemouth bass are adaptable predators that can establish populations easily when introduced into areas with clear shallow water and abundant food. The species is very popular with anglers because of its aggressive feeding behaviour and vigorous fighting when hooked. As a result it has been introduced for sport fishing into many new habitats where it often displaces other predatory fish and eliminates other fish species. It has been declared one of the top 100 most damaging invasive species by the Global Invasive Species Database. The largemouth bass is one of the most important sport fish in North America with many millions of dollars spent annually in its pursuit.

Predators of largemouth bass include herons, loons, mergansers, larger fish such as pike, walleye and muskellunge, and human anglers. Erosion may destroy habitat as they do not thrive in muddy water.