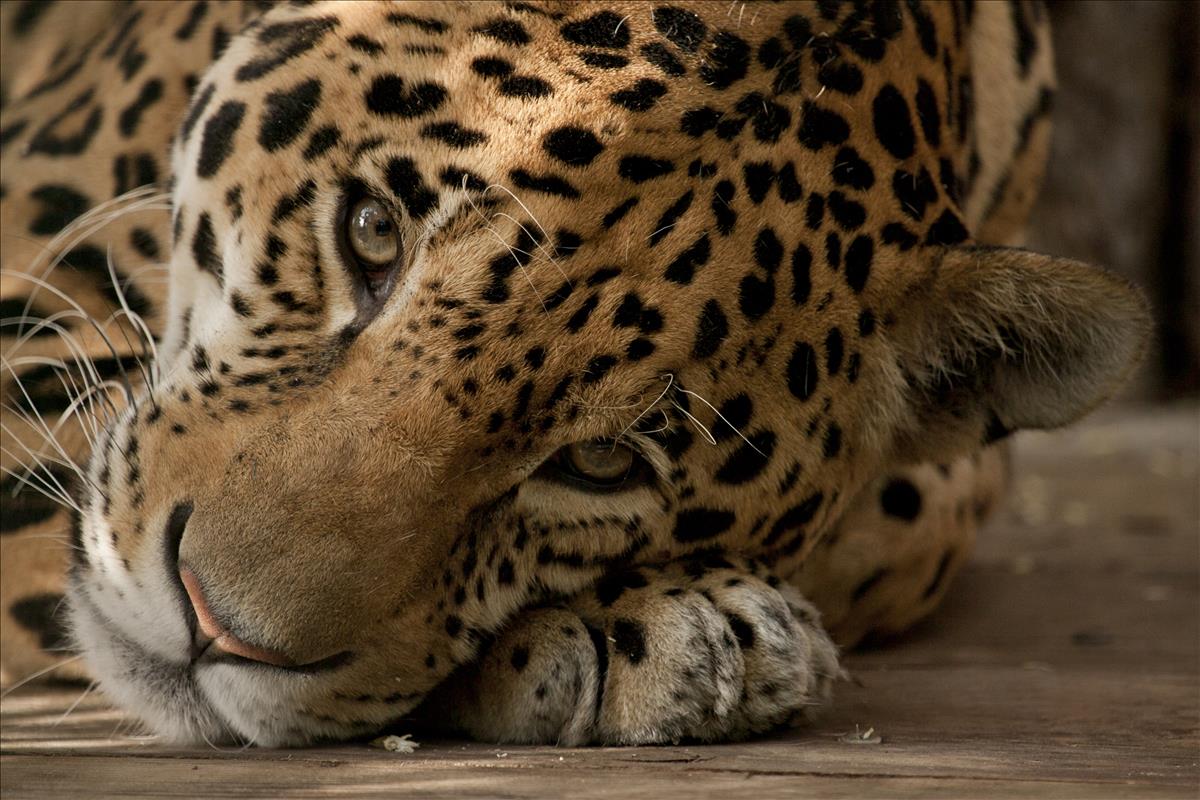 The jaguar is the largest South American cat. It is powerfully built. It has a large broad head, barrel chest and short massive legs. Its colouration varies from light yellow to reddish-brown, and pales to white or light buff on the underparts. The coat is covered with characteristic dark spots. The spots on the head, neck, limbs, and the underparts are large black blotches, whereas the shoulder, back and flanks have spots forming large rosettes that enclose one or more dots. Melanistic (all black) individuals are common and the spots on such animals can still be seen in certain light. It varies (regionally) in size, weight and length. Generally, the head and body is 1.2 -1.8 m with a tail length of 45 - 75 cm. Male jaguars weigh 90 - 120 kg, whereas females are smaller weighing 60 - 90 kg.

They are distributed throughout most of Mexico, Central and South America. In recent history they range further north into the southern United States.

Mostly deciduous and tropical rainforest, but jaguars can range from montane areas to the wet savanna. Jaguars are often found near freshwater. They prefer to live by rivers, streams, swamps, and marshes. In arid areas they are usually near watercourses.

There is no definite mating season. Breeding occurs at any time of the year. Several males may pursue a single female, the dominant one eventually mating. The male may stay with the female up to four or five weeks. Gestation lasts 93 to 105 days. The female gives birth to one to four cubs, usually having two young per litter. She provides all the parenting and gives birth in a den surrounded by a dense thorn thicket, or under tree roots. Cubs are usually born with their eyes closed, weigh about 700-900 grams, and have long coarse fur; buff with black spots. They open their eyes after several days. At seven months they take on the adult colouration and at nine to ten months the cubs are half grown. Cubs suckle for five to six months and start to follow their mother on hunts when they are about six months old. However, they will not hunt alone until they are one to two years of age. At two years of age, the cubs leave their mother to look for their own territory and mate. Female jaguars are sexually mature at about two years of age and males at three to four years. Young males are at first nomadic, jostling with each other until they succeed in claiming a territory. Jaguars are territorial, they mark territories with urine and tree scrapes. Female territories are smaller in size and may overlap. Jaguars are generally solitary. Mothers with young, subadult siblings, and courting or mating individuals are the few occasions that jaguars spend time together.

Jaguars are nocturnal hunters, hunting mostly on the ground or in the water. Jaguars are very strong swimmers, and will follow their prey into the water during the chase. They are also excellent climbers, leaping from a tree or a ledge to ambush their prey. They have exceptionally powerful jaws, strong enough to crush through a turtle shell. With large prey, jaguars commonly bite the head and puncture the skull with their canine teeth. Jaguars dispatch smaller prey by simply breaking their necks. With smaller prey, jaguars will devour the animal entirely. However, large carcasses may be dragged some distance and either buried or hidden in a sheltered area, saved for when the jaguar is hungry again, safeguarding it from scavengers. The jaguar is also a patient hunter of fish. It waits by the water’s edge, occasionally hitting the surface of the water with its tail, which inadvertently attracts fish. As the fish approach the shore, the jaguar swats at them, flipping the fish out of the water then spearing the fish with its sharp claws. The jaguar is one of the four "big cats". It is the third largest, after tigers and lions, the fourth being the leopard. These are the "roaring cats", all being quite vocal. The jaguar has a variety of vocalizations including roars, grunts, and mews.

Jaguars are persecuted as predators, being viewed as a menace to domestic cattle. They are hunted for sport and for the fur trade. Also, jaguars are threatened by the loss of habitat due to deforestation. Within their range they are regionally extinct in Uruguay and El Salvador and have been eliminated from many of the drier areas of the north.