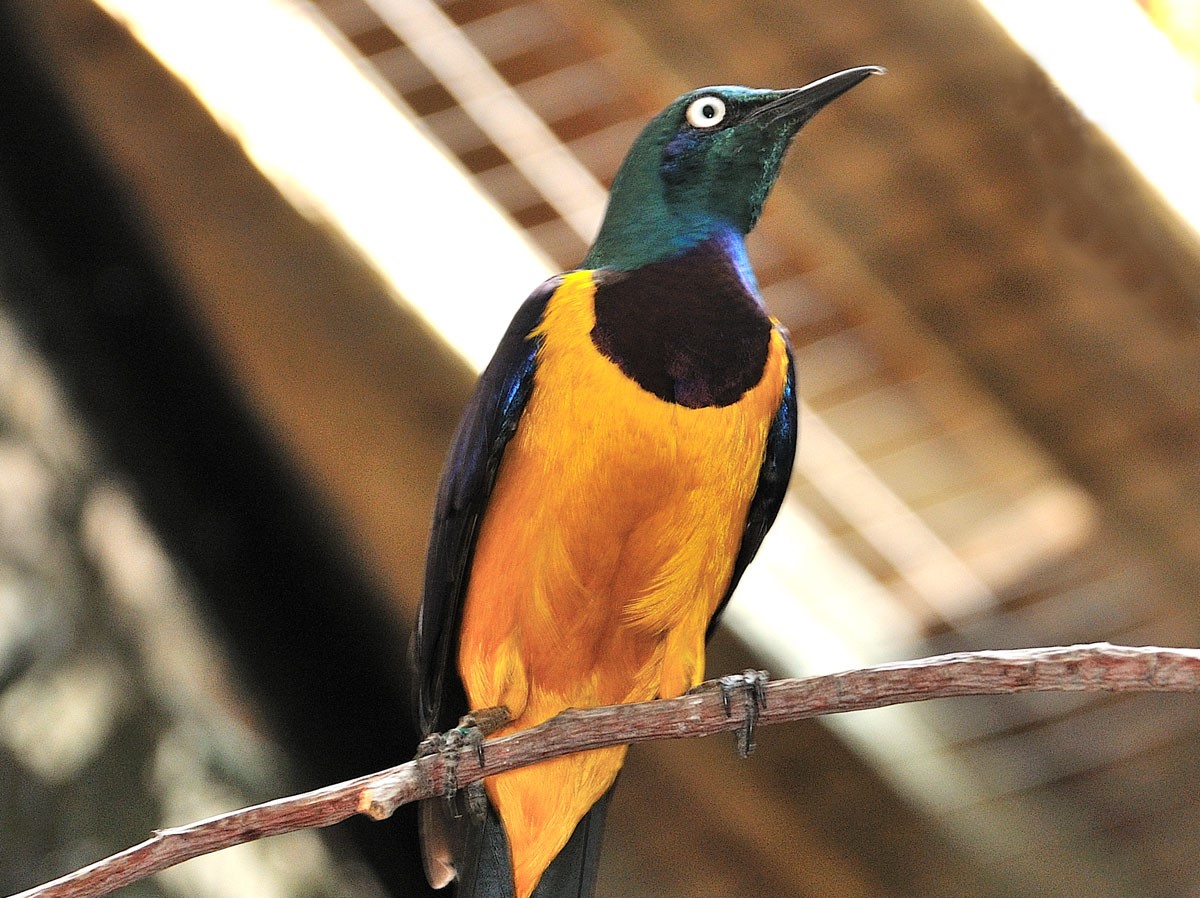 A tail that is 60% of a bird’s length would usually be its main feature. However, this starling tops that with its coloration. Iridescent greenish-blue covers the head, nape and throat, finished off by turquoise ear coverts. Large white eyes stare out over a black bill. The mantle, wings and underwing coverts are blue, glossed with purple. The tail is bronze with faint transverse barring. A purple half-moon attaches to the base of the throat, where it passes into blue. A brilliant golden yellow covers the rest of the underparts including the thighs and undertail coverts. Legs are black. This species is also known as the superb starling.

The golden-breasted starling’s range starts in southern and southeastern Ethiopia, runs down the western half of Somalia, passes through the eastern half of Kenya (with large numbers in the Tsavo National Park), and it terminates in northeastern Tanzania.

Prefers arid and semiarid areas like savanna, shrubland, and open bush up to 1000 metres.

Unlike most starlings, which feed on both insects and fruit, Cosmopsarus regius is primarily an insectivore. It dines on termites, beetles and ants from the ground. It supplements with snails, spider, seeds, and a little fruit.

Rainy season is breeding time for this arid-country bird. That means March to May and November to December. Tree holes, often old woodpecker sites, are used for nests made of grass, leaves, roots, and straw. Two to six pale green eggs with reddish-brown speckles are laid. The nest is three to seven metres off the ground. Incubation, done by the female, lasts 14 days. After hatching, the parents feed larvae to the hatchlings, but they will have five to nine helpers. Foecal sacs are removed by the parents. The hatchlings become independent during their fourth week. After a molt at three months, the young achieve adult coloration by six months. This starling molts once a year after breeding season. Cosmopsarus regius lives 12 to 14 years.

Like all starling species, golden-breasted starlings are highly social birds, noisy and garrulous when together. They gather in pairs or groups of up to a dozen. During breeding season, group members assist with nest building and feeding. The mother often begs her assistants for food by going into a crouch, quivering her slightly raised wings while gaping and vocalizing. Her helpers may ignore her, but usually give her at least some of the food. They spend most of their time on the ground, running or hopping in their hunt for insects. To catch termites, they use rapid flicks of the bill to dig down to their tunnels. When disturbed, they will fly to the next bush. They seldom fly above three metres.
The glossy blue and green colourations on the upperparts are due to a single layer of melanin granules near the barbules’ surface. During the hotter daylight hours, golden-breasted starlings will chatter away in a subdued voice with their mates. Their flight or contact call is cheeo cheeo. When signaling danger, they use chiar chiar.

The golden-breasted starling has been called the most beautiful starling in the world. Unfortunately that makes it easy for the wild bird trade to create a market for it. Cosmopsarus regius populations have come under pressure in some areas due to large-scale capturing. The Kenyan government has plans to turn the Tana River delta area over to the growing of sugar cane and rice. The cane would be used to produce biofuel, specifically ethanol. Since the delta is an important wetland, this would ruin it as habitat for many animals including the golden-breasted starling.