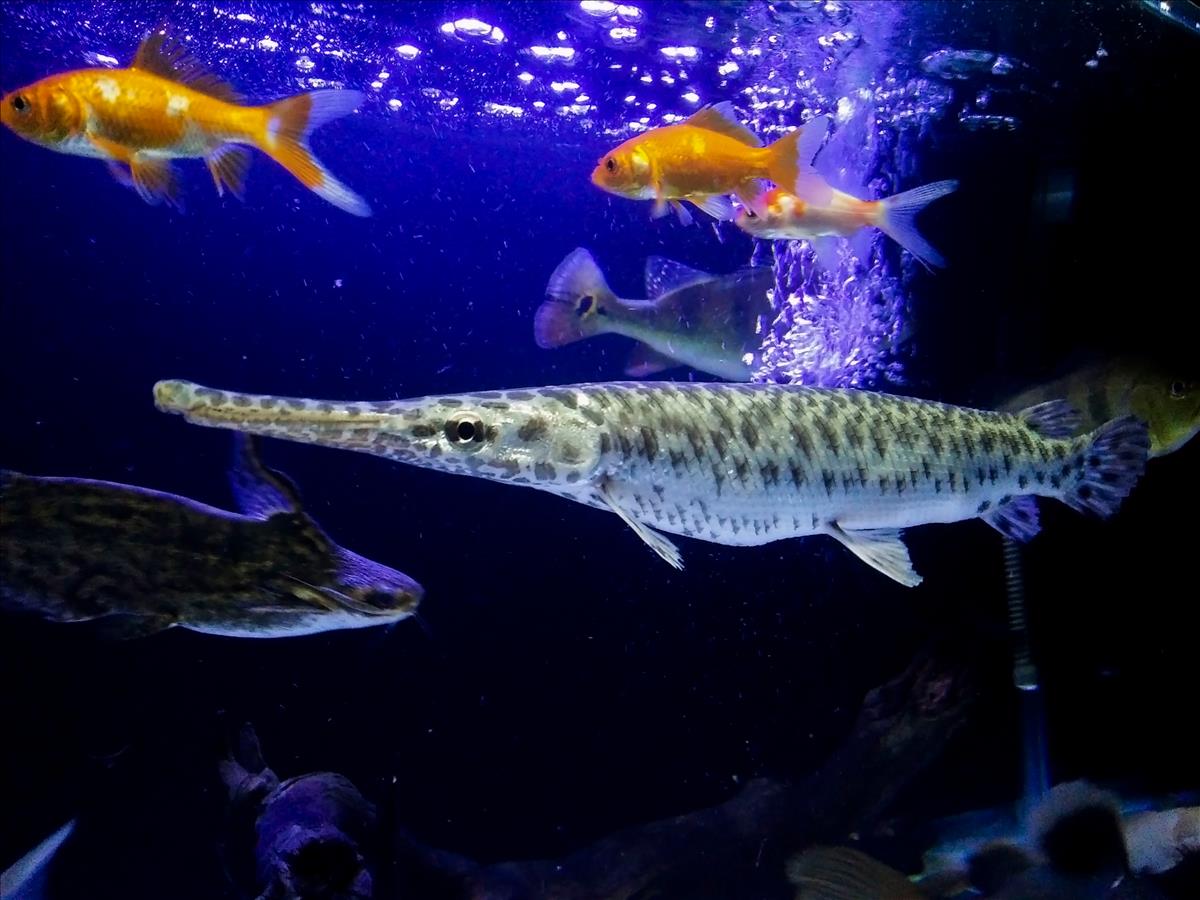 Length: 50 to 85 cm. The heaviest Florida gar on record weighed 3.2 kg. Females reach larger sizes than males. This ancient group of predaceous fishes can be recognized by a long, cigar shaped body with firm armour of close-set, enamelled diamond shaped scales. These ganoid-type scales are very hard, and they fit one against the other like bricks in a wall. (Native peoples once used the scales as arrowheads!) The Florida gar has long snout-like jaws similar to those of an alligator, containing many sharp teeth. The dorsal fin is located far back directly above the anal fin. This gar is a deep, olive green with darker spots on the back. Its sides are lighter and the fins are heavily blotched and spotted. It is very similar to the spotted gar; the major distinguishing characteristic is the distance from the front of the eye to the back of the bony opercle (the uppermost and largest of the bones that form the gill cover). If that distance is less than two-thirds of the spout length the fish is a Florida gar, if the distance is more than two-thirds it is a spotted gar.

Florida gar are found from the Ochlocknee River drainage, Florida and Georgia, southward through peninsular Florida and northward to the Savannah River’s drainage.

Florida gar inhabits slow flowing waters. They can be found in ditches, weedy ponds, streams, and lakes. As well, they are notably abundant in canals. They are common in habitats having mud or sand bottoms and an abundance of underwater vegetation. They often congregate in spring-fed rivers of Florida, in contrast to their close relative, the longnose gar that tends to cruise more open water.

Young Florida gars feed on zooplankton, insect larvae and small fish. Adults feed primarily on fish, along with some crustaceans and insects. Fish do make up the bulk of their diet but up to 17% is composed of freshwater shrimps. Insects and crayfishes are also taken.

Florida gar spawns in backwaters and sloughs. While most spawning occurs during the months of April and May, it may continue into October. A female averages over 5,000 eggs. No nest is constructed; the dark green eggs are adhesive and they attach to weeds and other objects. The young are solitary and beginning early in life they lie motionless, close to the surface.

Florida gar will lay in wait for prey fish; floating silently near the surface of the water; their long, slim bodies act as a type of camouflage, making them look like a stick or log. When they come upon a fish, they propel themselves slowly forward with a flick of their fins. Once into position gar will snap their heads sideways, and secure the prey which they will then slowly reposition so that it can be swallowed headfirst. Their long jaws full of sharp teeth provide a longer “reach” than that of other fish. As well, the struggles of prey caught in such a long snout are farther away from - and so are less likely to injure the eyes of the gar. Their slender, elongated, body also allows them to swim in narrow spaces. This can be useful in hunting for prey or escaping from larger fish that are hunting them. Gars have a highly vascularized air bladder that serves as an auxiliary lung, enabling these fishes to take in air at the surface and thus survive in water that has become too fouled for most fish to tolerate. This helps protect them from predators. As with many other species, gars exhibit a type of camouflage know as counter shading. Their dark, spotted dorsal (upper) areas make them difficult to see when looking down into the dark water. Light ventral (lower) areas make them less visible when viewed from below, as potential predators are then looking up into lighter, sunlit water.

Florida gar eggs are highly toxic to humans and animals, including birds. However, the juveniles are susceptible to a variety of fish and bird predators. Adult gar often fall prey to alligators.